I got a key for the beta, some early access thing via xFinity, though I suppose it just gives you access a couple of days early or something (supposedly starting today; I downloaded last night). Going to give it a try just for fun, even though I rarely play much of these games.

This week’s beta includes Ground War, the 32 player big map mode that debuted in MW2019. I’m looking forward to that. There should be vehicles and more Battlefield-style gameplay in there.

Looking forward to firing this up on xbox in an hour or so, we’ll see.

So they nixed the Zombie Outbreak mode, right? Saw some YT video about some kind of Escape from Tarkov mode but that video was really non specific. Like the secondary modes more than the basic MP PVP so hope there is something enjoyable.

Judging solely by the thumbnails of the latest couple of videos shared, I feel like this mega-popular game series is maybe a completely horrible thing in the world? Just a thought! Carry on. :)

Zombies have typically not been part of the Modern Warfare games in any way. That’s the domain of Treyarch and Black Ops mostly. So no, there will be no Outbreak mode, but there is a Tarkov-style experience coming to this version of CoD.

Ah…there are so many of these darn games over the years, I get them all mixed up…thanks.

Basically, you can count on the Modern Warfare games to not have Zombies. All the others either have it or have dabbled with their own take on it.

I’m not really a Zombies guy (although Outbreak was fun), so this one is definitely more for me. I just really like the modern setting and how it plays in a “realistic” way.

I loved outbreak, tend to only sorta like other zombies modes. Liking this so far overall though.

Well, maybe I won’t be playing the beta. For whatever reason, whenever I hit the “Update” button (which I suppose is today’s update), I just get the message box saying I need to give it permission, but I never get the Windows authorization dialog. Nada. Just nothing. Oh well.

EDIT: Never mind. Rebooting solved it. Played one round of invasion. It was pretty cool, kind of like a kinder, gentler Squad. We won, though I was dead last on our team.

I played some invasion and some regular 6 v6. Invasion all the way for me. I’m old and slow so it suits me well…fun.

I got quite possibly the greatest kill in my own personal history of Call of Duty last night. Apparently I need to be a TikToker. 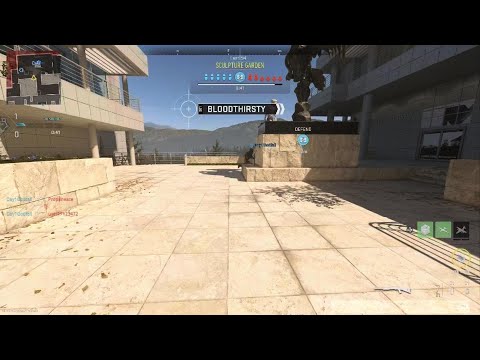 With last year’s BF debacle I’m thinking of jumping on the COD train this year. While my PC prob wouldn’t handle it, I’ve got my fairly new Series X champing at the bit for some solid FPSing.

I was gonna ask about M/KB on this, but it appears to be viable for Xbox. Is it worth it? I mean, I’m prob gonna be horrible regardless, and wouldn’t mind getting my controller twitch muscles working again. But I’m old and slow and old and slow.

Is it crossplay (PC and Xbox) and does it matter much anyway?

Is this Beta running up until the game goes on sale? Or is it a weekend thing?

How much verbal abuse will I take for kind of sucking? Will my psyche be able to handle the constant questioning of my sexuality from l33t 9 year olds?

That is pretty good! I was watching and thinking, “okay, I don’t wanna be mean, but nothing here is wowing me” but then the replay happened. Nice!

I honestly had no idea until I saw it, as you can tell from my reaction! When I blasted the first guy and the round ended I just thought someone else got the other dude. Not so! :D

We rolled them 5-0 so I told the other team to watch out for falling care packages when it was over. Lots snickering…

Not sure on M/KB. I have been a controller player for years. It’s perfectly viable, but I just prefer controllers now.

Crossplay with everything. PC, PS5, PS4, Xbox Series, Xbox One.

Beta is free tomorrow through Sunday unless you either preordered or have a code. Do you have Comcast? Xfinity is giving away free codes to everyone who has an account. After Sunday that’s it until the campaign ships for preorders on October 20 I think it is.

Most people aren’t verbally abusive if you stink, especially if you’re making jokes about how bad you are. It’s amazing to me that people don’t know how to defuse the assholes. Just be funny. They laugh with you instead of at you after that. And realistically, the game has matchmaking. You’ll be with your kind. :)

The other thing is that like MW2019, this one is a bit more tactical, or at the least, you can play more tactically and get kills. It pisses some people off. They will call you a camper, or wonder how you knew they were coming, etc. but the footstep audio is really good, so it pays to not always be pounding around like a gorilla the entire time, especially in modes like Knock Out. We had a match last night that was a 1 v 3 toward the end and the guy on our team just played quiet and took them all out as they tried to rush him one by one. You could easily hear which entrance to the room he was in they were coming through. Good stuff.

I like Invasion, but it’s super laid back. I couldn’t play that mode all the time. I love the elimination modes, though. I usually warm up with some TDM/Domination and then hop into Knock Out for awhile. Hopefully we’ll get some Search & Destroy again this weekend. That’s still probably the best elim mode they have.

Heh. People are running around like mice on crack so I think I now know why I suck at this game and you don’t! What you see as laid back I see as about as fast as I can take it. :)

Ha! I dunno… are they really running around that much on those maps? I’ve seen a lot of people planted in one location with the tent set up, a fire going, and an ammo box on the floor next to them. :)

…which is what you should do! There’s honestly nothing wrong with camping a location, especially in a mode like that one. Find a really nice rooftop or room with a few windows overlooking some open approaches and practice laying into people. It’s actually a great way to learn which guns kill quickest at range. You can also gain awareness of audio cues because there will undoubtedly be someone who rushes you eventually.

Last night I took the sniper rifle (available at Level 20 unless you use the pre-built class available immediately, which I do recommend!) and got up high and used every bullet I had. I went down and resupplied from one of the supply stations, went back up and shot all the bullets again, found someone who had dropped an Ammo box, used all that up, then finally had to go find more ammo! When it was all over, I had died once and ended with a 12.0 K/D. No lie. I clipped it because I figured no one would believe me. :)

I think in all that time I had one or two actual sniper duels and no one ever pushed me at that spot. The other team was clearly pretty crap, but hey, you’ll run into those crap teams too! So yeah, it’s definitely laid back. Just go find a nice spot, lay out your crudite and your cheese board on a blanket and start plinking fools.

Beta is free tomorrow through Sunday unless you either preordered or have a code.

Ok, this is where I was getting confused I think. If I pre-order the Beta lasts until the game releases but there is a simple weekend Beta open to all this weekend. All I’ve seen is the ‘pre-order gets Beta’ stuff on Steam and Xbox store, but also saw something about a weekend Beta. Which confused me. Thanks.

Oh, and that kill was glorious.

And more on the tactical side is what I like. I think the last COD I really got into was the old MW2 and I was on the Wargamer clan so it was a bunch of olds with no twitch anyway.