I had a crash this morning on my 1060 a couple minutes into my first hunt of the day but restarted and played a bunch of hunts now. Running at 4K, and it is super nice!

So many monsters! Doing the village quests as “training wheels” mode and the hub quests to see “the real version” of the monsters on the side. In a village quest I’ll routinely hunt extra monsters if they so much as look at me a bit funny - “I was only here to pick up these rare herbs but if you want to pick a fight”… I took out my first Barioth on the way to hunt another monster, which is pretty different to how it played out in Iceborne (although to be fair that was Master/G-rank Barioth).

1060 and 4k are not things I’m accustomed to seeing in the same sentence. I’ve toyed with DSR to do it once in another game, and it worked fairly well but not something I was going to keep active all time.

I know, it’s super smooth and crispy delicious - I usually run things in 1080p so this is a special treat. Of course even a 1060 curb stomps the hardware in a Nintendo switch (the whole game is < 30Gigs in size?!) so it’s not so surprising. It’s amazing to be able to bop around the village and jump into quests so quickly - there’s an HDD under the hood here, so I’m used to taking a break whenever a loading screen pops up.

Also, the dango looks like a delicious snack, but I do miss the crazy full meals you got in World. But I love that there are sooo many monsters - I’m sure I’m going to miss the ones that didn’t come back from World, because it was like a warm hug when Pukei pukei made a surprise appearance when I was hunting something else! If I can wish, I kind of hope they port versions of all of the World/Iceborne content - they need to take a page from the Hitman series ;)

I’m having a lot of fun, too. So far no quests took me longer than 15 minutes, which is great, and I’m also experimenting with weapons. I really like this iteration of the Hunting Horn, Gunlance is great, and I love that you can go spinning with the Hammer on demand now.

Please, just don’t do it in MP, as there is no way to counter the staggers it causes.

Sorry, the UNGA BUNGA is just too loud for me to hear any of that. SPIN WHEEEEEEEEE

Seriously though, isn’t there a flinch free option in Rise? Because if not, then no one should bring longswords either into MP.

I’m triple-buffed with the Insect Glaive at all times, so I laugh while the other players knock each other around.

The hammer finisher sends (unless it wasn’t intentional and has been fixed since last year?) any player around it flying, no matter your flinch protection.

Still haven’t decided how I feel about Rise, but saw the Skill Up PC review and some of the points in there resonated with me. Particularly the idea that this is a “mobile” monster hunter game - that hunts are intentionally truncated and sped up and all the changes especially wirebug feed into that. Even though the clock timer is still like 50 minutes, you’ll almost never feel the time pressure - as a solo player, the only time I’ve felt the pressure is if I get sidetracked doing side quests and hunting other monsters, etc and then I get the timer warning. And the difficulty is dialed back for accessibility - but it means that even when I’m bumbling around with a weapon I don’t really know, I can pull out a successful hunt. I feel like I can boot it up, knock out a hunt or two and put it down…but when I think in terms of a portable device that you can pick up and play while in a quick break, maybe that’s exactly what they were targeting (and if so they were successful!)

What I miss the most is all the more complex environmental/ecosystem sim aspects in World - when the monsters go to feed when they are low on stamina, and eggs, the environmental traps. I’ve caught them sleeping, but only a handful of times in Rise. In World I remember chasing almost every single monster to its nest, and often I’d discover a new part of the map. The first time I made my way to the Rathian nests in the forest was epic! Today I was fighting the snake Almudron and I fought him outside my subcamp, chased him around the corner up the waterfall, and then he limped back and took a nap…in the area he started in?

The immersion is a bit weak - the “story” here is pure random/kind of bad window dressing - sometimes I read the quest descriptions and those are a bit painful - all those come across as joke excuses for hunts. The tone of those is like “Oh no the monster broke my cart and scared me. Go get revenge” - it’s all cringey and the opposite of immersive. At least the main story cutscene bits are played straight and worked for me.

High rank has been a bit anticlimactic, since I’m hunting tougher versions of monsters I’ve seen before, when what I really want to do is hunt new monsters. I did start building other weapons though to keep me interested (just started dive bombing monsters with the Switchaxe silkbind uppercut) I think I’ve just about gotten past this hump though (the urgent mission I just unlocked has a new monster!), and I finally started crafting decorations and remembering that I quite enjoy customising the armor skills. Not sure how I feel about the talisman lotto tho.

I’m definitely looking forward to Sunbreak, which I feel is a bit unhealthy in terms of wanting more content even when I haven’t finished what’s here - although the whisperings I’ve heard about endgame are … that there isn’t really one yet, but I think it also means I don’t dislike Rise. I think I wanted World but better, but instead this is really it’s own thing. Janky in a whole different way, and adorable in a different way. Maybe also because of how Iceborne somehow made me into a Monster Hunter fan, I’m thinking Sunbreak might have a disproportionate effect on how I think about Rise. 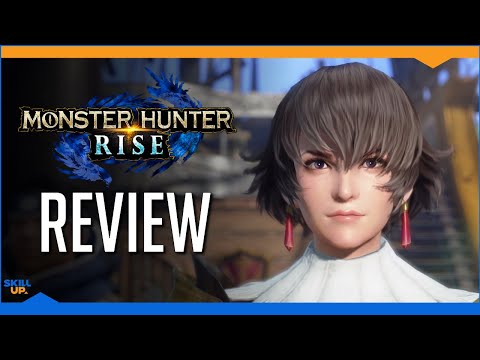 I’ve wrapped up my time with the hammer and lance and I’m still having a lot of fun goofing around on low rank quests learning the weapons.

The only annoyance for me so far is how quickly monsters will run away when they’re weak. Sometimes I’ll rush to the next destination, attack it for a minute, and then it will run all the way back across the map. It doesn’t go to its home/nest so this happens a couple times in a row. Is there some trick to keeping them there a little longer? I’m hunting all the monsters on 1 and 2 star quests so maybe my playstyle is causing problems.

this is a “mobile” monster hunter game

Ah, that’s what bothered me with World, and I never had figured it was the first real “desktop” Monster Hunter game.
Monster Hunter had always been portable games, as you put it, in their format, and World did away with that with those longwinded missions, especially in the expansion.
That said, original Monster Hunter games before the switch to World focused very much on hunting down the monster, a big aspect of the gameplay and party interactions that’s been gone almost missing in World, and is nowhere to be found in Rise.

Is there some trick to keeping them there a little longer?

Not really: it is very heavily scripted, to the point it becomes sometimes awkwardly silly (monsters running into each others and running away, because they had already triggered the territory conflict flag once before, is a common sight later on).
This is why most late games hunts look like 4 angry apes chasing a poor huge monster trying to flee around the map at insane speed (the monsters turn to second gear when you manage to catch up with them, which is another silly sight — why put a high speed mount and crazy wiring around if that just means the monsters will mandatorily escape them). The lack of Yakety Sax is heartbreaking.

I don’t think I’ve ever been more disappointed and frustrated in my life than I was using a bow for the first time.

I can’t stand aiming with a gamepad, so I feel like I should probably just give up now.

Time to join the PC master race and live the mouse/keyboard life!

I will admit I changed tons of the default bindings though, combinations like “scroll button + left mouse” are completely foreign to my muscle memory. I even thought “this is the time to learn to use the side mouse button!” and … I think I’ve stopped using it completely in my final key setup since I forgot what I bound to it haha…

I’m already here, and I did try it briefly. But I have to ask myself if I really care enough about the weapon to bother.

I appreciate how early the credits roll in this game. I know I’ve barely scratched the surface of the content, but reaching a temporary stopping point will help me get through all these games here in February.

Here’s my current list of favorite weapons from the ones I’ve tried so far in Rise, in order:

I still have a few favorites from World to revisit, and there are still a bunch more after that.

My idea was to play with weapons that I don’t play with in World, but that plan failed and I mostly play with Lance, Gunlance and Hammer. I might try Insect Glaive as well at some point.

Same, and I ended up with the Horn. It’s awesome! But a bit like Hammer I guess.

I didn’t like the changes to the Horn much. I used it mainly to farm the particular monster in the game that got a bad habit of instakilling you until you learn him properly, as it offered some protection, but it was way too repetitive and quite underpowered compared to weapons like the bowguns or gunlance — especially if your party isn’t up to snuff.
The new Insect Glaive is quite insanely fun, if a bit exhausting, and obviously not meant to deal with some monsters. I thought it was as fun as the Generations Ultimate’s Aerial style’s insanity.
It also rewards knowing a monster’s habit by heart like no other style, probably. Besides the great sword, but those sworders are insane.

I play a lot of Hunting Horn in World, but the Horn in Rise is a completely different weapon that I also play. ;)