100fps? unplayable, you won’t catch anything with that.

Sounds like you should be getting more than 100 on a 3000 series at 1440p. What Hz is your screen, and Display Frequency set to? Are you running Vsync? Frame rate limiter disabled? Do you have Image Quality set too high in advanced settings (I think this is super sampling)?

I had it at 150% but it doesn’t seem to make much difference. Even setting it to low doesn’t do much. I have a 9700K so I don’t think it’s CPU limited either unless turbo boost is broken.

I’m “seeing” much higher framerates in certain cases, like as I return from the hunt and the camera zooms to my character it’s at 280. This is just what I’m getting right at the start of the easy hunt before moving my character, which seems like the easiest way to compare framerates and yet no one seems to be doing that.

I did my test at the start of the first demo hunt, too.

150% drops mine down to around 100-120 fps at 4K. If yours doesn’t get any faster when dropping it really low, sounds like something must be bottlenecking you to 100fps.

I have a 9700K so I don’t think it’s CPU limited either unless turbo boost is broken.

Shouldn’t be, my CPU use is still fairly minimal even when frames get up to 200. But still wise to check it, if you’re concerned. I’m just using the built-in Windows gaming performance overlay. You can pin the one that shows framerate and CPU/GPU use.

Have your prostatitis checked!

I think this explains the mystery.

I don’t know if the game is bottlenecked… I’m playing the same game, and if I set everything as low as it can go (720p, 70% image quality, all advanced options off or lowest), I see 200-300fps moving around the start of that level.

Okay my mistake, it looks like some settings only change by returning to the main menu. If I restart, I get the same thing you do.

The hilarious thing is I can go into the game at 720p on Low, then switch it to 1440p on High, and I still get 200+ FPS everywhere. Haha! Either the Steam FPS counter isn’t compatible with the game or the locked settings have a massive impact on performance. (Too tired of this to check.) But this might also explain why people are getting “locked 144 fps” at 4K max.

Awesome! But you said you were only getting 100 with those settings before, so what changed?

But this might also explain why people are getting “locked 144 fps” at 4K max.

Also possible they’re running with vsync on a 144Hz display (as you would - I only turned vsync off to test how high frames would go).

Hopefully, not only will saves be isolated, but multiplayer will be kept separated too.

Awesome! But you said you were only getting 100 with those settings before, so what changed?

No, it’s not actually 200 fps on high. Either the framerate counter is confused or it’s something about the locked settings that can’t be changed in-game. It’s very strange!

PC Demo releases, people compare how large their framerate is.

I was worried someone would remark on this eventually, but this is the biggest high mystery I’ve had in PC gaming in years. This is wild, confusing stuff. Something is completely wacky and I love a good software quirk.

PC Demo releases, people compare how large their framerate is.

That’s not really what’s going on… it’s just an attempt at helpful troubleshooting, due to some large discrepencies across similar hardware. Obviously it’s an issue that doesn’t occur on console but does on PC.

Sorry to stink up the thread!

It’s not just you, it’s everywhere, even on the Discords, it’s like people only talk about framerates about this game anymore >_<

To be fair, the Internet has been trying to buy a new videocard for two years now, so they’re either excited to show off the results or express their relief that their old hardware does so well in this well-optimized game.

But yeah, it’s always been a thing with cross-platform games.

I blame you personally for this, am gonna hunt and not capture a bunch of Malefestio tonight for it.

excited to show off the results

I would have thought the game would be much less demanding than World (which wasn’t really demanding from what I gathered?), which is why I’m so surprised about the technical talk about this game everywhere.
I just wished I would be hearing about how it’s so freaking beautiful despite the poor details, and how the lance is so amazing, and arrh! 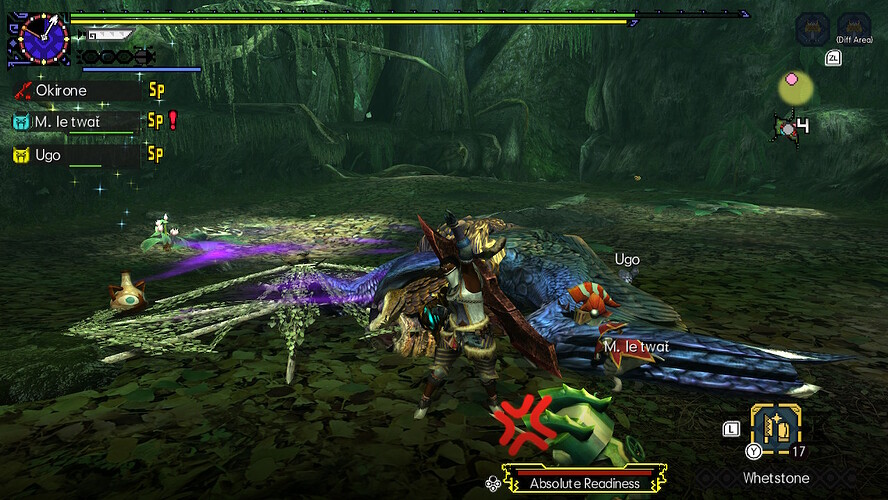 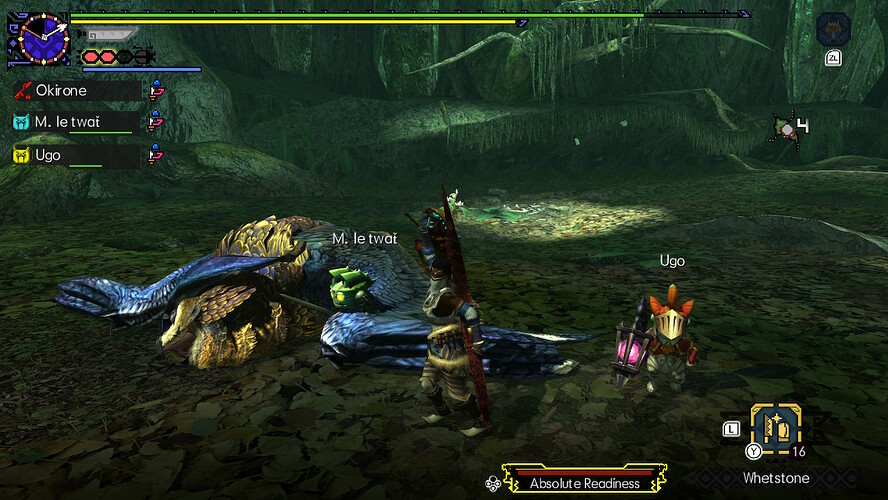 It’s nice, the PC version has HDR too which really boosts the contrast!

HDR must make the time transition in the maps beautiful I bet.
I wished there was a nighttime in the village as well.

I picked this game up a couple of weeks back when Target had it on sale for $45. I tried to go back to World but the lack of pausing caused frustrations (due to spontaneously having to stop due to kid).

I’m over 20 hours in now and just hit 5 star village quests (beating Magnamalo). I’ve spent a non-trivial amount of time in the training room experimenting with different weapons trying to figure out what I actually want to main. I also have spent a lot of early materials building weapons to try them out on hunts.

In MHW I played all 50 hours with Hunting Horn, but Rise’s horn doesn’t have a lot of the depth I enjoyed from MHW’s.

Charge blade seems like I should enjoy it, but I am missing something in timing the shield charge and sword charge that is frustrating me, and missing SAED/AED is frustrating. It feels like you are doing a little damage just trying to build up to a AED or SAED for the one big hit, which isn’t that interesting to me.

I had some good ok fun with lance. I need to get better at learning monsters tells to fully take advantage of it though. I think I might like it better once I can get some better equipment skills going on.

I tried great sword and … definitely not for me. I couldn’t figure out how to consistently get myself to aim where I was charging and thus I’d end up swinging in the whole wrong direction a bunch of the time. I have no idea what I was missing there but not being able to quickly adjust the direction I was facing before starting a charge made me angry. I know it’s something I"m doing wrong, I just don’t know what and not sure I want to really spend time figuring it out.

Bow was fun for the two hunts I tried it on. It’s not clear to me if there’s much depth outside knowing when to dragon pierce and when to dodge, so I’m not totally sure how long lasting it would be for me.

Now I’m currently doing some hunts with gun lance, and I’m actually finding it fun. Figuring out when to wyvern fire, when to commit to a wyvern stake, reload and full blast is giving me some good variety. So maybe this will be my main… Until I get ADD and decide to try something else…