I ended up picking this up last night after all. After initially getting crushed by the opening snow shark thing, I upgraded some of my armor to master level (what a difference in DEF between this and the rank 8 armor I’d been wearing!).and beat it down. Then I went back and beat the crap out of a Nerg with the newer stuff and it was no contest. Power level certainly shot up w/ the expansion!

I looked around some and saw that Windows Defender is going nuts for some people. This is somewhat true for me, but not enough to cause a CPU bottleneck. I tried disabling all the things people have tried and still no luck.

From what I’m seeing, it looks like they’ve coded the anti-cheat processes so intensely that it’s slowing the game down.

Is this happening with base game with post iceborne patch or only for game plus iceborne content players?

The post I saw was quite specific, and lots of people were having problems with CPU usage.

There are two components, one for encryption, the other is supposedly Denuvo: 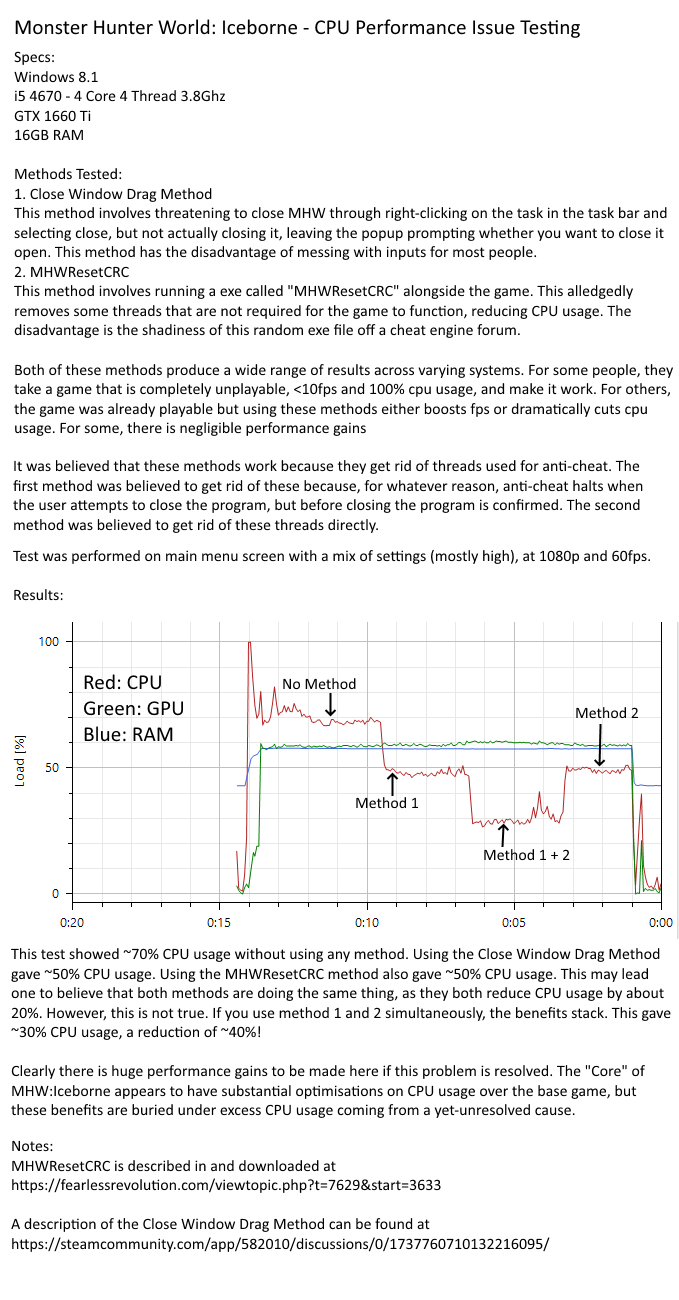 That’s half the CPU working against you.

[Issue Summary]
We’ve noted an issue that resulted in an unusually high level of CPU utilization during active gameplay. The upcoming patch, which should be released in the coming days, should improve CPU utilization.

Next is Barioth, which some people say is the Master Rank equivalent of the low rank fight against Anjanath. I’m getting mentally prepared for that, I suppose. ;)

On a side note, Hunting Horn is amazing in Iceborne. The new attack/note is fantastic and opens a whole lot of tactical options now. New songs are pretty cool too.

Amazing as it is and sounds, though, it seems it will still be second option for melee, because the Switch Axe is absurdly awesome in Iceborne. Axe mode is not only viable now, but it brings a whole lot more fun and nuance to the weapon, since now I’m switching between modes a lot more (in MHW, it was usually better to avoid axe mode and stay as much as possible in sword mode). I don’t know why Switch Axe just clicks for me in MHW, but it’s fabulous now, and I’m loving every minute playing with it.

As for ranged, I have to experiment yet, but I’ll probably go with the Heavy Bowgun. We’ll see.

I don’t know why Switch Axe just clicks for me in MHW, but it’s fabulous now, and I’m loving every minute playing with it.

Dude, I’m with you. I haven’t been able to put it down. There is so much versatility now.

If you’re looking for a good early game SA the straight up pukei-pukei is fantastic. Mid game go for Rathian. Both have poison, power phials, white sharpness, and high attack.

It’s an awesome weapon and the only one I’ve used to date.

Just built that one yesterday before going to bed, but I haven’t tried it yet. I’m using Mighty Gear I so far (the first MR bone one) and it does have higher raw damage than the pukei-pukei one, but it has dragon phials and no white sharpness, so the pukei-pukei does sound like an upgrade.

I’ve been Dual Blades for my entire career with a bit of Horn on the side. I’ll have to look into this Axe business though.

I went up against barioth last night, quaking in my boots expecting a 30+ minute fight, and while it did end up being a brutal 35 minute slugfest that burned through all of my consumables, it wasnt significantly harder than coral pukei pukei or nightshade paolumu. i used the base MR iron escahton longsword and the base MR kulu armor.

i had multiple turf wars during the fight, so i think it’s designed to have barioth run into other monsters to soften him up.

Turf wars in (solo) hunts usually have me using dung pods liberally, but sometimes I’ll wait to see if the other monster helps me somewhat.

BTW, it was fun to see Nightshade Paolumu putting a Barroth to sleep, and I never noticed how similar the Coral Pukei-Pukei and the Paolumu are when flying until I saw both of them flying away in the same direction. ;)

This game is awesome. ;)

Turf wars would be cooler if the other monster did not inevitably somehow decide you are a bigger threat than its natural (and much larger) enemy, and usually pretty quickly, too.

decide you are a bigger threat

But they can’t know that!

But they can’t know that!

Considering most predators who have contact with humans learn to fear humans (and the fifth fleet isn’t the first one to get to those islands), they can.

I really enjoy this game but it has some irritating quirks. One of the worst at the moment is the way as I’ve ranked up interactions between monsters have gone from an occasional, neat interlude during hunts to a near-constant annoyance. I can’t hunt any damn thing without at least one other monster showing up, sometimes two, and it just happens over and over during a hunt. Want to hunt a Tobi-Kadachi? Well too fucking bad, the Bazelgeuse that’s hanging around is going to poke its nose in every five minutes to disrupt the hunt. Jesus, just…go away.

Sometimes that works to your advantage - turf wars can do a boatload of damage to the monster you’re hunting. Just make sure you always bring dung pods and you should be ok (most of the time).

I’m planning on finally diving into Iceborne this weekend. I usually play MH with a friend, will I have to put up with all the annoying “you can’t play with your friend until they’ve watched the cutscene” issue again, or did they listen to the negative feedback and avoid doing that again? Because it’s easily the worst part of the game, IMO. So disruptive when you’re trying to play together with friends or family.