I found that looking ahead to see what upgrades are coming 1-2 floors ahead has helped me a bunch. Knowing there is a card duplication coming so i spend this floor getting a super card so I have a worthy target, or taking a spell upgrade now, knowing I want to purge cards from my deck next floor and that path has unit upgrades on it etc…

Anyone know if there’s a feasible build that involves buffing the pyre itself? I keep coming across cards/artifacts that hint at this being feasible, but I don’t know if it’s an actual strategy or a way to mitigate pyre health loss.

Finally snuck a won. Seraph is a right asshole. He didn’t just apply the debuff to my units this version of him did when they were first summoned, but also each time he bounced around to their floor again! Oof. Luckily a mixture of rage-scaling demons and heal-scaling, multi-striking, uh, plant thingies kept me going.

Anyone know if there’s a feasible build that involves buffing the pyre itself? I keep coming across cards/artifacts that hint at this being feasible, but I don’t know if it’s an actual strategy or a way to mitigate pyre health loss.

I think you can feasibly use it as a backstop that is part of your strategy, but not so much a primary way to kill enemies. From what I’ve seen, anyway.

I bumped to Covenant 1. Like STS Ascension 1, it’s largely easier. I will keep bumping until I start hitting some walls, because I still haven’t lost and that’s silly. The difficulty curve seems much shallower than in STS and Monster Slayers and Dream Quest and such.

If I’ve got a 33% winrate at your baseline difficulty, your game is probably too easy. I’m TERRIBLE at games!

I am thinking of

The good stuff is that pyre does aoe. But I don’t see how it can handle a tanky boss. It is impossible to bring down the HP with a mere 40 dmg per round with so few daze.

Edit: realized that the autocorrect mangled my sentences

I believe the intent is for the ascension levels to be where it gets hard.

If I’ve got a 33% winrate at your baseline difficulty, your game is probably too easy. I’m TERRIBLE at games!

Yeah I haven’t played this yet, but in Slaythespirelikes, the pre-ascension level isn’t the “baseline difficulty.” It’s the tutorial. You have a 33% winrate on the tutorial! Git gud!

Get off my lawn… Back in the good old days slay the spire was considered the clone.

Get off my lawn… Back in the good old days slay the spire was considered the clone.

:) Considering Rogue wasn’t even the first roguelike… I stand on precedent!

I just had the closest win with an unconventional setup I tried.

I did not pick up any other units and used the train steward. Once I lucked out holdover early, I just duplicated the card when I had the chance. This allows me to just keep pumping up the Trample hero.

The last boss Seraph almost did me in when it killed my Trample hero. It got to the last level and I had to use an endless Train Steward kill it. It was basically down to the last hit.

On hindsight, if I managed to luck out with a multihit or quick card I can use on the trample hero, it would have been a breeze. The void binding makes the Trample hero viable (I always thought he was useless). 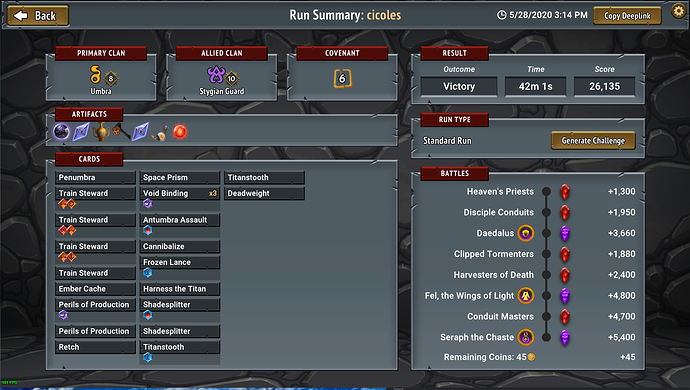 Edit: I really love playing on random with the random starting cards. I would never have thought that Void Binding makes the Trample Hero viable if they did not give me void binding as part of my starting card.

This makes it so much more superior compared to StS in finding working combos.

That’s basically the joke - I’m so bad at games that I can’t even reliably beat tutorials :-)

This game is really fun! The difficulty ramps right up though, like @cicobuff I just finished Covenant 6. I was doing an Orange/Green run.

But my easiest game by a long-shot was as Purple/Green where I somehow ended up with a Naga Siren with multistrike 22, 94 damage a swing and Quick. That was neat. Some really busted stuff can happen in this game.

Yeah, it can be fun trying to figure out how too make stuff work. That’s half the fun.

Some really busted stuff can happen in this game.

This is the other half 🤪

Kinda embarrassing . . . having won 5 times now, and lost maybe 10, I have literally just notice that when you start a new game the very first screen tells you what form of Seraph you will be fighting at the end. I guess I should start plotting just a little bit earlier . . .

You can tell from the map too

So my question is, can you tell what form of Fel you would get? (and would it make any difference?)

I appreciate why they did this, but by Covenant level 14 where they just keep adding starter cards to my deck, I am wishing for a different form of difficulty. The deck is just so bloated with crap at the beginning.

I almost won with a hellhorned champ but I screwed up in the fight against Seraph by not paying quite enough attention which spell was consumed by playing it first.

I feel like that first couple unit selections and choices which upgrades to go for are really hard to figure out what the right thing to do is. I have been focusing on unit upgrades more lately because the deck being bloated makes it harder to get that particular spell, whereas units are permanent. But I don’t know, that’s clearly not always right.

There are so many ways to get rid of cards, though. And you can pop +20/consume on some too.

I have literally just notice that when you start a new game the very first screen tells you what form of Seraph you will be fighting at the end.

Well, I had never noticed even now… so thanks!

Got my first win after 4 games.