I did pretty well in StS, but I suck at this. I think I’ve now lost around five covenant 1 games in a row. Got to the final battle last time so I’m getting a little better.

Where does the sap come from? Is it the lodestone totems…don’t have those yet. Which upgrades on Tethys? Is hellhorned important for anything here?

I think I’ve now lost around five covenant 1 games in a row. Got to the final battle last time so I’m getting a little better.

The same thing happened to me, but don’t worry it’ll get easier!

The Lodestone totems are the level 10 Stygian unlock. They are rare, so always take any challenges that have unit draft even if you know you’ll lose pyre health (you only get 40 pyre hp at cov25, but this is still the correct way to play). Stygian can win a few other ways than Lodestone Totems, you simply won’t have access to one at least half the time because of the rarity. If you get them duplicating them is your highest priority. You can put incant armor or HP on them as an early upgrade before you have more than one.

For champ skills the ideal route is Frostburn, -mana costs, Frostburn. It’s winnable as full frostburn but you will need to take 2x -1 spell cost at every spell shop you find. I like red because of some of the red-exclusive relics (particularly Railhammer), the armor spell costs 0 and gives good quality of life early, the little pewpew fireballs are decent removal until you ramp up, and the X spell that just does 2X to all enemies is surprisingly good with Stygian because it can be used at 0 cost to trigger incants, deal with waves, and you can throw on a +10 damage so they wipe out all the little stuff in a wave even for no mana cost.

But all that stuff is just for surviving the early game. All you need is 3 Lodestone totems, your champ, a bunch of 1/0 cost spells preferably including as many Offerings as you can get, and you win. Your core will kill everything except the bosses and take no damage while doing it because of the sap, and then your champion can massacre the boss with frostburn from behind a wall of sap and armor.

You can win without lodestone totems, in a more traditional way with a multistrike naga supported by guardian totem(s). Or you can try to get 2-3 doublestacked, holdover Guardian’s Amulets and some offerings with holdover. This can really only been done with a bit of luck and card duplication. But I won numerous games with those strategies when the Lodestone totem decided it wasnt dropping. I also lost a couple of those, but not near as many as I won. 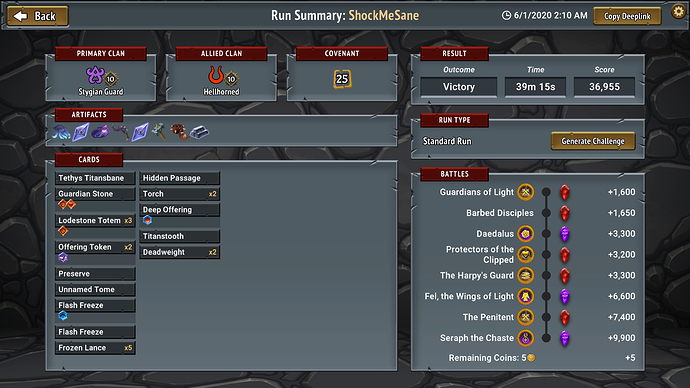 Holy crap, you sat through the credits?! A worthy achievement indeed.

Yeah, Sap is easily the best status effect in the game. It’s even competitive as a 3 cost spell doing 3 Sap to the whole row, so how crazy is it that a 1 cost / 1 space unit will do 2 as in incant effect?

Why is Sap the best effect? It’s because it basically solves every problem at the same time.

The best comparison I can make is to Stealth. IIRC it’s the Melting Remnant who have a spell that gives two stacks of Stealth. Which is amazing, and basically a run-winner by itself. But the situations where Stealth is better than Sap are kind of rare, while Stealth will not allow you to ignore DPS checks.

I’m still playing random/random, so can’t count on the Sap totem on every run. But the matrix of completions makes it even clearer than last time what works for me and what doesn’t :-D 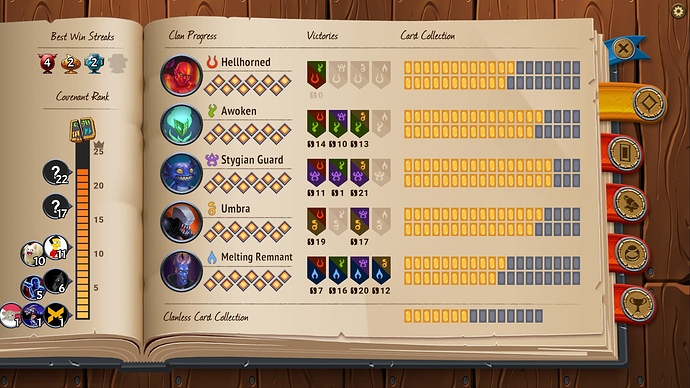 Still no covenant wins with a Hellhorned champion, even though I did come within literally one strike once somewhere around covenant 18. And more interestingly, no wins with a support Melting Remnant. What that’s telling me is that Rector Flicker is even better than I’d been giving it credit for.

(I’m a bit surprised there’s only one champion per clan, but maybe this will change?)

Sounds like a great idea for DLC hehe. However, the upgrade paths you can take for each champion do make them play very, very differently already.

I’m Spock on steam if people want to add me.

You have a much better record with the Melting Remnant than I have experienced. By the show of the mastered cards, seems like you have pretty “locked” in your favourite cards for the Remnant faction.

I didn’t actually sit through the credits, they just automatically pop up when you beat covenant 25, even exiting out of them gets you the achievement apparently.

I like the Melting Remnant, the Bounty Hunter is probably my favorite designed card in the game. My highest win with them was at 19 but I don’t see any reason that wouldn’t be doable at 25.

Making Lodestone Totems fill 2 capacity, or cost 2 energy to cast, or even some rework of Sap so that 1 stack = 1 damage, 2 stacks decay a round, double the stacks everything other than lodestone gives. Which would halve it’s current effectiveness. I dunno, it’s just such an auto-win card currently, there really isn’t anything comparable.

Stealth is almost as good except it doesn’t stop non-bosses from blowing up your Pyre if your dps isn’t enough to kill them all each round. But you can doublestack/holdover a pair of those and stack enough stealth to beat bosses who don’t skip floors. Still, Sap makes the regular mobs do nothing when they reach the Pyre which just merrily murders them and is easier to generate than stealth and is just objectively the best defense.

the X spell that just does 2X to all enemies

How so you deal with tanks in second spot, with no sweep on your champ?

Still no covenant wins with a Hellhorned champion

Got my first yesterday, with melting secondary. I started with the -2 unit cost artifact and picked up the 50/50 big boy. Lots of armor stacking and battering ram did the heavy lifting.

I have been curious about what the mastered cards looked like (no one seems to have provided an image of them anywhere) so here is what winning on Covenant 1 looks like: 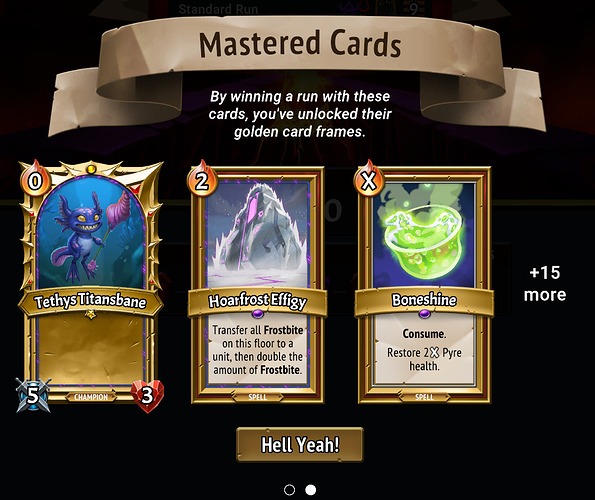 Those are nice frames for Mastered cards, but maybe not as cool as Hearthstone’s gold cards.

And Covenant 1 seems a lot harder than the first run (on Covenant 0), which I suppose was a tutorial run. Seraph now has 2000 health, for example.

Yup, cov1 is a significant step up, but sometimes people don’t really notice because they have learned more by that point.

I think the Awoken champ is much easier to use, personally, especially without everything unlocked. If you want to stick with Stygian, try putting a tank in front and going for spell weakness.

Thanks for your reply. I think I will try the Awoken champ next. My only win so far was with the Hellhorned champ, on Covenant 0.

Interesting you find the game too easy. I’m certainly not finding that! It must be a tough thing to balance. Maybe the devs need to make the difficulty curve steeper for expert players.

Those are nice frames for Mastered cards, but maybe not as cool as Hearthstone’s gold cards.

Gwent’s animated cards really kick things up a notch in this department too.

I think the main reason cov1+ is ‘harder’ is for that sneakiest of gaming anti-patterns: loot pool dilution. The starting cards are pretty strong when you first play but as you unlock more your rewards are less likely to synergize with whatever direction you’re trying to build in. Slay the Spire suffered from the same issue, IMO. The phenomena is exacerbated by the reward mentality of holding back some of the really good cards, or cards that really bring together a strong combo, until the last few unlocks.

I lost my first game, absolutely steamrolled my second then had about a 4-5 game loss streak since I just couldn’t put anything together. I had most things unlocked by that point on my ‘primary’ clan and have since enjoyed a 4 win streak.

I’m enjoying this, mostly thanks to its brevity, but damn is it imbalanced. I’m not sure it’s great design to get all the way to the end of something without your health being so much as scratched then to just get annihilated because the numbers have got so huge all of a sudden. Any trivial error or run of bad luck sees you getting absolutely pasted in short order. Losses in StS felt a bit more… orderly? drawn out? controlled? Something like that, at least…

Interesting you find the game too easy

Just to clarify, that was @MisterMourning. I get my ass handed to me frequently. But unlike some other games, I don’t find it stressful, even when things aren’t going my way. That’s a big deal for me, because there are many games I like, but don’t play for that reason.

I’m not sure it’s great design to get all the way to the end of something without your health being so much as scratched then to just get annihilated because the numbers have got so huge all of a sudden. Any trivial error or run of bad luck sees you getting absolutely pasted in short order. Losses in StS felt a bit more… orderly?

I think that’s only true when you don’t know what to expect. Once you’ve seen that last fight a few times you should know, don’t you think?

Sure, but knowing what lies at the end doesn’t stop me getting crap rewards each time. I guess there’s wisdom in abandoning a duff run when you’re given a deck full of lemons, but StS did a way better job of convincing me that I could turn it into lemonade and eke out a win down the line.

Oh, I’ve done that (turned a game around). But if you are being offered cards that don’t fit what you are trying to do, don’t take them. And you have so much more ability to modify cards here (Or remove them), I feel the opposite is true. I feel much less like I’m at the behest of RNG here and if I don’t make it work it’s on me. There’s only a single run where I could argue I got screwed by luck, but even than I knew my hand was too damn big at 25-26. I didn’t pull a burnout card for my champion before he died. With a thinner deck that wouldn’t have happened.