Sat down at 9.30pm to have a quick go and didn’t stop until 2am.
This is really really good! The “protect the pyre” concept reminds me of Legend of the Keepers a little.

Only a Tabletopia version. Codex is clever. If you ever want to give it a go, let me know.

Just has my first run with Stygian Guard. I did great until Seraph. Didn’t set up well enough and tried to be cute. Didn’t protect Tethys well enough and got no spell weakness on the boss. It was easily rectified. Just goes to show how quickly a run can fall apart. All part of the learning experience.

The release definitely plays better compared to the demo. I see that they tweaked both the cards and the progression for the better!

The demo is apparently months out of date. It was still representative of how the game plays, so I guess they figured their time was better spent on the actual release.

I’m really liking the unlocking of the cards. Obtaining golden card borders are really fun also! Turning to be a serious challenger to StS imo!

Love the weaken ability of the Stygian… it’s an awesome boss killer because of the relentless feature of boss.

Oh dang it. I kick a Slay the Spire habit, Ascension 17-18 ish and 100s of hours played, and thanks to this thread, 20% discount and this game is freaking amazing I get sucked into this?!

Anyone up for expanding the range of Steam friends to uh, compete against in a very friendly way? I am friend code 66985455 (Lykurgos)

Sorry? FWIW, I have been getting my ad handed to me repeatedly since unlocking Stygian Guard. Made it to Seraph once in the last 7-8 runs, but couldn’t get the Card I needed Into my hands, despite having two copies with permafrost. Everything else has been, well, a Train wreck. And this is just Covenant 2

(I’m https://steamcommunity.com/id/jesnell/ in case anyone wants some leaderboard action.)

The random starting cards from covenant 1 onward bother me less than I thought. Sure, there’s time when it means there’s unplayable garbage in your deck. But the game is very generous with deck culling capabilities, and it really doesn’t matter whether you’re culling out a card that doesn’t work all or that’s merely underpowered. And it’s pretty hard to lose the game, or even get into a bad situation, before you’ve had time to fix the deck. But it does at least force you into thinking about why some of these cards exist.

(E.g. I was forced to play with the card that gives a unit 3 lifesteal in exchange for 2 emberdrain. Which seems like trash; three lifesteal does not seem worth losing three energy, even with a delay. And unlike the other emberdrain cards I’d seen, you can’t arrange to have the unit get killed after you gained the benefit. The beneft from lifesteal is delayed kind of by definition. But it turned out to be a killer card for the boss rush.)

This is an easy recommendation for a friend who gave up on StS due to thinking that act 1 in StS is a pointless waste of time, and would just like to draft cards to start in act 2.

But I’m still not convinced by the upgrade system. There’s basically no tension about early/mid/late game tradeoffs in the deck building, since basically everything could be upgraded to something that’s viable in endgame. There’s also no need to delay taking cards or delay upgrades, since as far as I can tell the loot tables and shop contents are the same at every level. Just go with endgame cards right from the start.

There’s basically no tension about early/mid/late game tradeoffs in the deck building, since basically everything could be upgraded to something that’s viable in endgame.

See, I like the idea that if you do it right and build around it almost anything work. I want the starting deck/relic/champion to give me a push in a direction and see if I can make it work. The tension, for me, ifs in bringing the build together in time, and having it be strong enough and efficient enough to actually work.

Maybe you can teach me your Stygian ways. I’m not good with them. Took me 7-8 tries to beat covenant 2 with a combo of Stygian and Awoken. Win with a sting deck.

Unlocked Umbra during that run, so something new to play with.

I have some success using frozen and spell weakness of the Stygian. The frozen is very useful long drawn out relentless fight the boss while the spell weakness is very powerful against the boss if you can stack it up to unleash a high damage card.

Just had my first victory, third run of the game. What got me was I had a relic that gave me +7 starting energy for cards, and I had a 10-drop 100/50 unit I had upgraded to be like 115/115 and he seemed to always be in my starting hand (I had two copies of him) so I could drop him down. I had another spell that did 5 damage to a friendly, but granted 20 armor, and it was enchanted to go to the top of the deck when played, so I could pile armor onto him every turn. It was an incredible combo. I see a “deep permalink” to my victory run, so let’s see what this does: 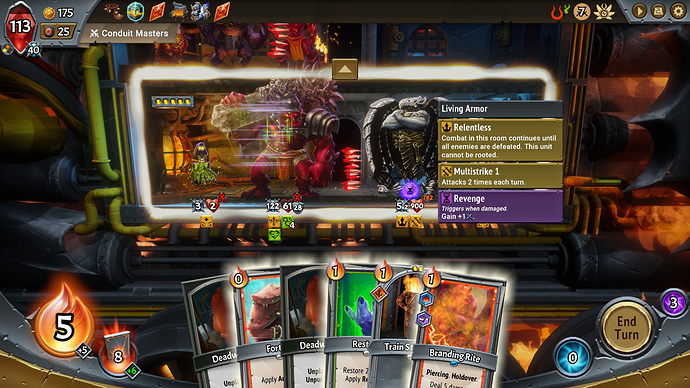 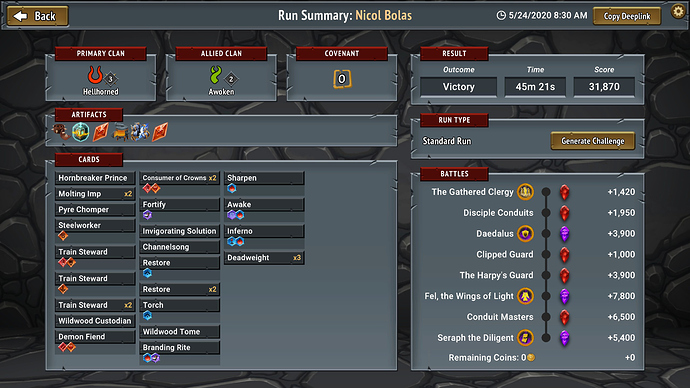 Very nice! I haven’t used consumer of Crowns yet.

That spines win I had yesterday got wacky in the next to last fight. This illustrates one reason I find the tactical decisions so much more compelling than Slay the Spire.

I took a challenge with enemies starting on every floor. No problem. But what I didn’t realize (because I didn’t look) was that the units I was fighting had a death curse (extinguish) that did five points of damage to the front enemy unit when they are killed.

I started with my normal setup during that run with my low health champion behind a vinemother on the middle floor. The vinemother puts a sting card in my hand every turn. Those cards are my primary form of damage. If I lose her, I’m hosed.

After the first turn, enemies from the bottom ascend to the middle. If I don’t attack them, they kill vinemother. If I do attack them, the extinguish kills her. I look at my draw for a unit I can put in from of her to protect her. I don’t have one (I think the one I had, there wasn’t space for). Then I see Channelsong.

Channelsong is a spell that summons a unit from your draw pile and buffs their stats with an extra 20 attack and health. That sounds amazing, but this spell has a nasty habit of showing up at the end of the deck when there are no units to draw. But not this time. I play Channelsong and pull a…Molluscmage?

Now, a Molluscmage is a 7 atk/ 1 health buff unit you put in the back, because it’s fragile. But in a moment of prescience I can’t explain to you, I had enhanced the attack of this little guy by 10 (17/1) and made it endless, which means that unlike normal units in this game, if it dies, it goes to the top of the draw pile (typically, dead units are just gone for the rest of the battle).

So now I have a 37/21 tank mage that gets drawn again the following turn when killed, and another that is 17/1, because I had duplicated the unit. Using those two, I’m able to swap them into different spots as they are killed and save the day.

Have I mentioned I love this game?

I loved Slay the Spire and this one looks pretty nice. Battling my inner self of getting with the 20% discount or waiting since who knows when I’d actually start playing it. There is a reason the Humble Choice is usually underwhelming for me…I tend to have already picked up the ones that I really wanted.

Picked this up. Absolutely awesome so far if maybe a little more combo-wombo than I’m entirely comfortable with. Lots of multiplication.

Won my first run on my second try. The artifact that gives a 50% chance to daze (skip a turn) to every enemy is really very strong.

Went down to 4 pyre health at one point. Figured I was boned. I was not!

I didn’t get to one-shot the endboss with 1300 damage from from Battering Ram, but I did squish some of his homies thus.

Heh, I had that artifact and the one that dazes on top row and still lost my most recent run (my first with umbra). I wanted a multistrike upgrade and didn’t get. Could not manage to work around it. In retrospect I really had too much riding on needing that. I just didn’t have the damage output for the last fight

Congrats on finishing tutorial mode, now on to the real game 😁

Just did a combo with the Hoarfrost + Holdover and Stygian Frozen + Sweep.

Hoarfrost + Holdover allows the doubling of frozen (which damages every turn) and puts the card back into the draw pile.

This allows me to double the frozen inflicted on the Boss every turn. I manage to kill Fel which had 700 HP’s even before the relentless phase set in.

Well done! That sort of thing is exactly what this game is about. The challenge is in finding something equally OP, or nearly so, in every run.

I find that once a combo is found that can carry all the way to the end, stop taking in any more cards is the best choice.