That’s amazing! What time period would that cover?

At any rate, they’ve created something very cool and they deserve it. From what I’ve seen, they are quite receptive to feedback and I think they will continue to add new features if it is doing well.

I have not beaten the game yet with my first couple of runs but the last run where I used the blue guys in the plant guys I made it to the final boss but did not quite have enough damage to do him in. Still enjoying it but you guys beating it all the time are obviously much better than I am at this!

The key is to have enough damage to not fall behind, and enough tricksiness to kill the bad guys who really need to die asap.

Upgrades are stupid good and cheap even if they’re not exactly what you’d pick for a card. Holdover is especially insane but don’t sleep on any of them. I have been buying 4-6 upgrades per shop and just rolling.

The end was a close one with my 2nd level of heroes another backup thorn unit launching a bramble that finished Seraph. Bramble had holdover which was fantastic.

Edit: Thinking back I think I would do much better if I had placed my Thorn hero at the 2nd level and then use the first level to clean out the enemy minions. Bramble needed a clear line of sight to the boss.

It’s ok. I’ve played 20 hours and hoping to win my 4th run. Hell, I also played the demo for a good 5+ hours and I had already watched streamers play for 15-20 before the game came out, so I understood the mechanics going in. It’s STILL kicking my ass regularly. There’s quite a learning curve, but I’m having a blast.

Just finished that Covenant 3 run and my last upgrade stop was ridiculous. I duped my 1-cost, doublestack Grovel card, got the double gorge artifact (would have been nice earlier, but still doubled my Overgorger’s attack (started at 170) by the time he fought Seraph, and reduced my hand size by 4-5. But the real kicker was that I got a permafrost upgrade for Furnace Tap, so I was absolutely certain I had it in hand when Seraph entered the train (it gives multi-strike for my overgorger but it also has Emberdrain 4, and I didn’t have the energy production to use it early). I have lost a run because I didn’t have the card I needed at a pivotal moment.

Hah, immobile things like statues can’t be move by your effects like knockback or trap doors either.

Ok so I did just have a successful run. So I’m now great at this!

It was the first 2 factions using Thorned Hollows and Railbeaters with the Demon champion in the back on the 1st floor. I’d put a Thorned guy, and then a Railbeater behind him, and the Champ in the back (I got an artifact that expanded floor space by 1 and I took one of those crystal things that does it another time). The thorned guy would take care of most smaller mobs, then the railbeater would shove the tank out of the way and the Champ with multistrike 1 and slay 20 would kill 1 or 2 smaller mobs and start getting buffed out the wazoo. For some boss battles he had over 200 damage and with multistrike that… pretty good! For extra fun I was able to give the champ Quick a couple of times.

One thing I like to do is get a sweep unit on the bottom floor. Quick is great on those, too.

I’m now 4/4 on Covenant 0 after my initial loss on my first game. Just finished a red/purple run.

Armor stacking isn’t the worst. Got to live the dream and whack one boss for 462 and another for 562 with Battering Ram. Didn’t get to drop that on the final boss, but did kill him in the first room with a multistriking Rail Beater with like 154 attack or something by the end.

Decline cards, guys. Commons that don’t play into any of your themes are awful. I think I took like two purple spells (daze the enemy team for 1…yes please) and two purple dudes (gain armor when you play a spell on their floor).

By the by, dudes with Incant: Armor 3 that then get an upgrade that gives Incant: Armor 1 and then you get the artifact that gives “every time your dudes get armor, they get that much +3.” Yeah, that was a thing. Recommend.

Glad you said this, I felt like I hit a wall at 9. Then I had a magical run with…the burn bright variant of rector flickeris. I sense a theme :)

The dazed on level 10 is such a neat difficulty increase that isn’t just more numbers.

I can’t tell if the upgrade system is randomly distributed or intentionally built, but it seems to be somewhat cleverly laid out such that I never seem to get very many artifacts or events if I pursue too many unit/spell upgrades.

I’d be interested in leaderboards or whatever, here’s my friend code: 41366256

By the by, dudes with Incant: Armor 3 that then get an upgrade that gives Incant: Armor 1 and then you get the artifact that gives “every time your dudes get armor, they get that much +3.” Yeah, that was a thing. Recommend.

I know that works, and I’ve tried it, but not had a successful run with that so far. I’ve tried getting 2-3 incant dudes on same row, but it just doesn’t scale enough. I’m doing something wrong.

Incant by itself is generally not strong enough. But with the armor relic thing it was real good.

For whatever reason, I never got into Slay the Spire, but I am loving this game. I can’t believe people are beating it on their 2nd or 3rd runs. I just finished my 3rd run and lost on the 6th fight. Of course I tend to not think and just pick whatever sounds good.

Really stupid question, but what do they mean by “stack”? Like apply +2 rage per stack. I assume it just means that rage is a stackable bonus, right? At first I thought I was thinking stack, like monster stack, but that obviously wasn’t it.

It’s just a stack of buff/malus effects. For example, Rage is +2 attack per Rage point. So Rage 7 is +14 attack, and you lose one Rage per turn. Or Regeneration 5, or etc. 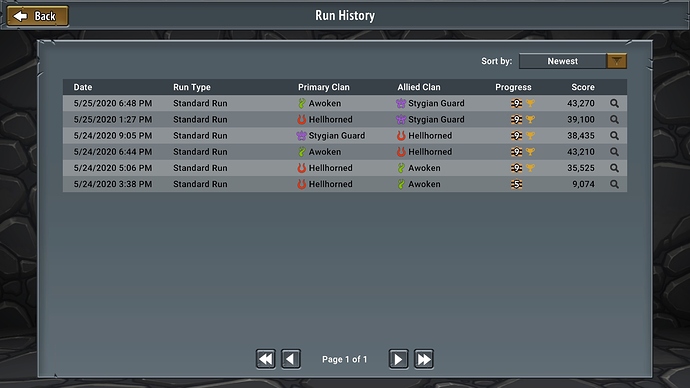 Umm, where is your gold coming from? Unless you’re only getting the cheapo upgrades, or you’re giving the enemies a buff to get more gold before each fight, I don’t see how this is possible!

For whatever reason, I never got into Slay the Spire, but I am loving this game.

This is me as well. Don’t worry, you are closer than you think, just focus your deck a little more or push a combo a bit further.

Umm, where is your gold coming from? Unless you’re only getting the cheapo upgrades,

The optional objectives help. And don’t sleep on the cheap upgrades! I like to buy the spell upgrade that adds consume to basic cards I don’t really want, because it’s cheaper than purging it from the deck. Likewise, the +10 attack is pretty useful for 20 gold. And -1 energy (I love to make cards cheap).

And don’t sleep on the cheap upgrades!

Yeah, my best runs have always involved early upgrading of a good card and being able to duplicate it once or twice through the run.

My favourite ‘something cool’ that I have come across so far is having the option to duplicate a card 5 times. That can lead to some crazy builds provided you have upgraded cards.

Or even basic cards in some cases. In that Sting win I mentioned, I copied 5 basic Sting cards (if I’d been able to upgrade first, that run would have been nuts. Wouldn’t have done that without a sting artifact though.