The color scheme is very similar, for sure. Looking at two images side by side I see the 2D card art looks like it could belong in Hearthstone, but since the game features actual representation of the summoned creature, I’ll give the nod to Monster Train here. 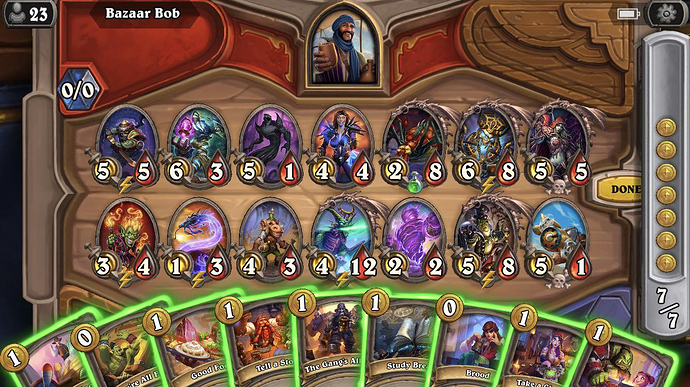 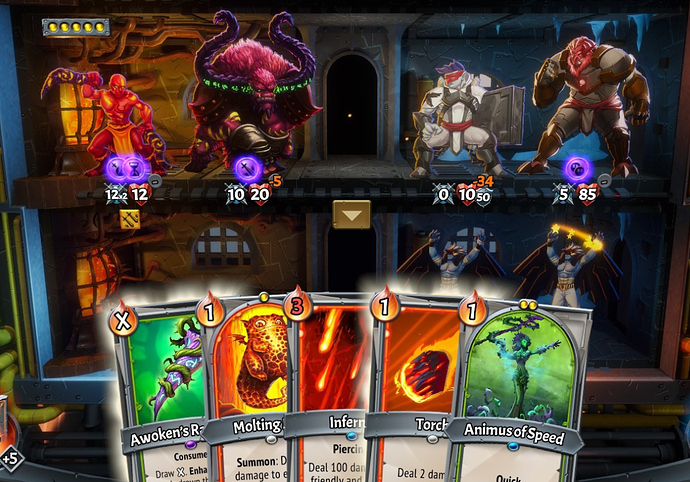 The card layout is also similar, but I suppose there isn’t any reason to reinvent the wheel here.

Question - has anyone picked up the full version? Worth looking at? How about the previously locked factions? I played the demo but (at least my first few runs) found it kind of frustrating to make any progress - the first boss seems kind of unfair, but I suppose that’s how people are supposed to feel with games like this initially. After all, I remember thinking at least one or two bosses in Slay the Spire were unbeatable when I first played that! But I am going to admit, I’m a little surprised the heat in this thread died down once launch day hit.

Card layout, art, style, even the fonts are reminiscent of Hearthstone.

Not that there’s anything wrong with that. Hearthstone’s great, and looks great. Monster Train devs have good taste.

So, we know it’s visually stunning. The remaining questions: is it fun and historically accurate?

I picked this up because apparently I can’t have enough deck builders in my life. I’ll play it starting tomorrow.

I can’t imagine you mean Daedalus, the one with the bombs, who os’s the first boss.

Assuming you mean Seraph, that’s the final boss. You always fight Seraph, but they (like the other bosses) come in multiple versions (for instance one consumes your first spell each turn, another casts sap on your units). The trick to this game is finding something you can exploit to ridiculous levels, whether it is multistrike or spikes or incants or morsels or whatever. You need to multiply your power level quickly.

I’ve got the full game and have done the tutorial run plus one more (which I won). The game is fantastic and I think it may well be my GotY. Trying not to spam the thread any more than I already have.

Two of my three runs, Daedalus squashed me by way of me “winning” thanks to my engine taking him out but suffering heavy losses. One time I took him out with my creatures, but just once. I am sure I got to the second “level” boss though I don’t recall exactly which one that was in the demo - I never beat that one, though I only got to it once (the only time I didn’t need the train to finish off Daedalus)!

EDIT: Also, spam away - that’s what game specific threads are for!

I would suggest taking more advantage of the shops. You should have added at least a unit or two by then. Get some upgrades by that point on at least one. If your champion is tanky, get a damage dealer. If you are using a glass cannon like the demon prince, get a tanky unit to protect him. That should be enough to get past Daedalus. An early unit with sweep or an AoE like glimmer is also massively useful early.

In the “ascension level” I found to my dismay that the one of the bosses had AOE that hits your entire row.

Owns the “placing tank in front of glass cannon” strat.

So after the demo my impressions were that they had some good ideas, but also a bunch of aspects I wasn’t too impressed with. But then I kept thinking about the game for days after stopping with the demo, so clearly they are doing something right :)

At least at this stage, I’m not seeing the shorter game times though. I’ve played three games, and the run times were 45 minutes (level 6), 1h10min (win) and 1h40min (win on ascension 1). These are comparable to what StS runs take.

In the “ascension level” I found to my dismay that the one of the bosses had AOE that hits your entire row.

The annoying bit with that is that with normal enemies it’s easy to see if they have Sweep just from the combat preview. “Wait, why are the backlines getting hit”?. But against anything with Relentless you expect everyone to die, so all you have to go by is that the boss is taking only a bit of damage.

If there’s a graphical cue for Sweep (not just the icon, but something changing the unit graphics like Spikes or Dazed), it’s too subtle for me to notice.

So after the demo my impressions were that they had some good ideas, but also a bunch of aspects I wasn’t too impressed with.

I like the production values and the game play loop. But after unlocking almost all of the cards for the 2 demo factions, I have a nagging suspicion that it’ll not have the shelf life of StS. I’m not sure if it’s do to the limited number of cards and combos or my lack of imagination in how combinations can be utilized.

You can get through an entire StS run in an hour? No way in the world I could come close to that.

Yeah, I got myself in trouble with a sweep boss on my current run. Gotta watch for that.

@cicobuff the demo has two clan combinations. The full game has 20, among other things.

The ascend and descend ignores caps? Truly that is amazing. I was thinking that it’s use is so marginal!

You can get through an entire StS run in an hour? No way in the world I could come close to that.

The firs post from @jsnell saying his runs take about an hour floored me, but two people? Are you guys going super slow or am I too fast? My runs take about 30 minutes. I’m not always going after the heart, those can take up to 40 minutes or so.

Hell, I just got this achievement a few weeks back:

I guess since only 6.5% of players have done this (I did it by accident, I was just watching Schitt’s Creek while I was playing, I don’t even remember the deck I was going with) I must be in the minority.

I got this yesterday and am loving it. Have not played it much though.

I’m about as good at this as I am with Slay the Spire (which means … not very good) but for some reason I feel like I could get better at this (whereas with StS I just get frustrated when I suck).

I think I’ll be getting this. Want to encourage the devs to keep improving it.

Another pro tip: spells that don’t explictly say otherwise can usually be targeted at units from either side. There are definitely situations where you want to kill your own units.

I am having an easier time finding the fun earlier on than I did with Erranorth Reborn. Most of that has to do with how well the card text is laid out and explained via tooltips compared to Erranorth’s info dumps, but I’ll have to put more than thirty minutes into it to see if it will have the staying power and depth that Erranorth seems to promise once you grok its systems.

The firs post from @jsnell saying his runs take about an hour floored me, but two people?

Played this…rather a lot yesterday, up to “ascension” level 4 or 5, I forget which.

Random thoughts:
The main game is easier than the demo. I think there are more battles before the final boss which gives you longer to ramp up, and many of the cards have been tuned to be more powerful in general. That said, there are 25 ascension levels, so I’m not that concerned with difficulty yet.

You start with the same two races as in the demo. New races are unlocked by 1) playing spells, 2) playing units, 3) killing enemies. The first one unlocked after a few runs, I just unlocked the other halfway through my last run yesterday, nowhere near the last one yet. The one that unlocks by playing spells is thankfully very different from the first two, in a very fun way. There are some great and unexpected combinations I’ve already had.

Some areas seem less variable than others. The shops to improve units or spells always seem to have the same options. I’ve seen one or two unique events and what seems like quite a few repeats. This could be biased observation of course. The shops in particular have only up to two “rare” options available, and that’s where most of the cool effects are.

The pace of unlocks is a bit slow for me. Every level gained by a faction gives one or two cards or relics. Not enough to prevent some of the runs possibly feeling a bit samey. I think when everything is unlocked the amount of craziness that will go on will be great, but it might take a bit longer to get there than I’d like.

All that said, I’m having a great time! Recommended if you liked the demo, and don’t play the demo too much.

Another pro tip: spells that don’t explictly say otherwise can usually be targeted at units from either side. There are definitely situations where you want to kill your own units.

Great point. Wish I’d mentioned that earlier. Imps and Morsels are frequent targets. Ascend/Descend can also be useful on enemies.

The ascend and descend ignores caps?

Yes, you will see additional pips on the row in more of an orange color when a row is “overloaded”. Theee are other methods. I know at least one, for umbra. There’s a unit that will summon a second copy of a morsel summoned on that row. It will make that copy, regardless of capacity (though again, I think the max of 7 units per floor applies).

The StS discussion is interesting. I play everything slow. I know this. I did put over an hour into an MT run I haven’t finished (just beat Fel), but it’s a run I’ve been struggling with (thisPlaying slowly), and I’m actually enjoying the fact I’m not steamrolling like the previous run and trying to keep my train together. I suspect the folks that blood through StS runs will get much faster with this.

This is entirely subjective, but I feel much more in control of my MT runs than StS. I feel like I have more control over my deck and I’ve yet to feel like I lost because I just didn’t get anything useful. The multiple lanes opens up more options, imo.

This is entirely subjective, but I feel much more in control of my MT runs than StS. I feel like I have more control over my deck and I’ve yet to feel like I lost because I just didn’t get anything useful. The multiple lanes opens up more options, imo.

I don’t think it’s subjective. The lesser number of cards and the less randomness gives a much tighter control over the deck. The only exception to this is the random cards they give at start in ‘ascension’ mode.