I couldn’t resist clicking on the QT3 banner ad proclaiming “MoO3: a game so bad you can have it for free”. Well, folks, I’m shocked and appalled that such blatantly false advertising exists. The fact is, they will pay you to “buy” the game. Here’s the Amazon.com link:

You gotta love it.

Too true, Tom, too true. But just in case anyone is willing to settle for a lousy couple dollars to play one of the worst games ever, here’s the link (which I omited from the original post). 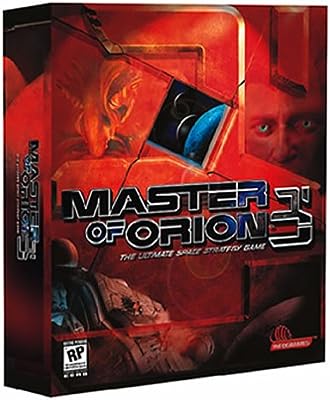 The Master of Orion series is synonymous with addictive turn-based strategy gameplay. Though the premise--choosing a unique alien race and then leading it in a galactic quest for glory--isn't new, the ...

If you buy it with GalCiv, they’ll give you an extra dollar.

Can someone more versed in how the game industry works please explain how anybody makes any money on this deal? Yeah, I know: volume, volume, volume. I just don’t see how it’s worth it either for the game’s manufacturer or its publisher to pay people to take it.

Well, for one thing, rebates are great for drawing people in, but a fairly small percentage of people ever get around to actually getting everything together and sending them off with all the proper stuff. That’s why Best Buy and CompUSA have big rebates instead of just putting things on sale.

That, and even if someone does file the rebate, the company still gets to keep the money for 90 to 120 days and earn interest on it.

Sales figures are increased even if profit is not. That’s something.

I bought my copy with a jewel case copy of MOO2. I’m sending my rebate in soon. I played it for five minutes. I quit when I couldn’t figure out how to build a freaking ship, and what is up with the buildings list having like leaves and shit next to a bunch of names. Are those structures that are already built? Is it a list of what I can build? I liked MOO2’s way to displaying what I had built much better.

Washingtonpost.com had an article a little while back about mail-in rebates. This guy kept track of all his rebates for about 8 months. Not a single one sent him the money, and virtually none of them even acknowledged the rebate until he called and harassed them. They’re a waste of time.

Because of legal rumbling against them, the rebate folks have been forced to clean up their act recently.

What cracks me up is when Dell does rebates for direct sales.

Washingtonpost.com had an article a little while back about mail-in rebates. This guy kept track of all his rebates for about 8 months. Not a single one sent him the money, and virtually none of them even acknowledged the rebate until he called and harassed them. They’re a waste of time.

That is what happened to me with RAM the last time I bought some that had a rebate offer. Kingston, IIRC. Wait 6-8 weeks (why the hell should it take that long), call and inquire, they say they are happy to expedite, and then my check is cut the next week and then mailed a week after that. I knew then that rebates were pretty much a scam, excuse me, business tool.

Plus, there are, I am sure, a fair amount of people that are too lazy, forget, or simply do not do the necessary paperwork.

Wait a bit longer Tom. When theis deal first started they were paying you only 1 cent ( $.01). Now two weeks later it’s up to two bucks. Maybe by the end of the month you’ll get your 20?

Whenever I send a rebate in, I just jot down the details (product name, rebate amount, date due, 1-800 no. to harrass when it doesn’t arrive) on the notepad on the fridge. Easy way to keep track.

But then, the last 5 rebates I’ve sent, varying in amounts from $10 to $180, have all arrived without any prodding needed. Bizarre!

The thing that pisses me off is that here in Ohio they can advertise an item for twenty bucks when it’s actually $40 and have at the bottom - includes $20 mail in rebate. I think that’s bullshit because you actually have to pay $40 plus tax to get it out the door. Only then 7 weeks later, if you fill out your paperwork, do you get your 20 bucks back.

I think it should be against the law to advertise a price and have it cost more to actually purchase it.

Here in CA, everyone says “Mail-in rebate” in the ad. Probably state law. I’ve never had a problem getting rebates, although I confess that for small ones (like $10) I often fall into the camp of people who go “Well, this game is only $30, that’s worth it,” and then gets home and immediately go “Ah, $10 isn’t worth going through the hassle of sending in for the rebate.” But I do it for larger ones and IIRC I’ve gotten them all.

The most annoying rebate I ever had to deal with was on 100 CD-Rs from Best Buy. The net price was like $2.99, but along with one in-store instant rebate for about $5, there were three other rebates to send in, each for about $2 to $10.

I sent 'em all in out of spite, but it took a ridiculous amount of time to get all that together.

I see the banner ad for MoO3 that occasionally appears at the top of the QT3 page has something like “Now they PAY YOU $2 to buy it!” plastered across it.