This thread is for all things ancient Rome. More for history, society and culture, and less games, but games too. It’s largely inspired by me being so jazzed by playing in the Republic of Rome PBF, that I know I’ll have a lot of detritus Romana to scribe out from time to time. But anyone else who has some Graffiti to lay out is welcome to as well.

Posit: Elagabalus was instrumental in the decline of Rome and the rise of Christianity. The Crisis of the Third Century began when Elagabalus’ successor was assassinated.

Evidence: In closing and degrading the traditional Roman pantheon, in elevating one God above all others, he set in motion events that would transform the Roman world. Eastern cults “ran wild” after this though they didn’t start then. Both Aurelian and Constantine a century later declared for Sol Invictus - somehow similar to the Sol Invictus of Elagabalus, one might think - and December 25th was instituted by Aurelian as the day of worship of Sol Invictus.

Modern scholarship as far as there seems to be consensus seems to downplay Elagabalus having any long term consequences. I would posit this was incorrect, and has to do with the difficulty of repudiating Roman Emperors in Roman political discourse itself,how the system which elevated them to divine status made it politically difficult to outright repudiate Roman Emperors, no matter how depraved or dumb. Therefore Elagabalus having more significant consequences to the Roman political system is more plausible than modern scholarship may give credence.

I’d agree. He established a precedent; though the specifics were distasteful to the public at the time, the already damaged civic pantheon would never really recover.

That was too easy! Hmm… how about more controversial…

Posit: Heraclius’ assumption of the Greek title Basileus marks the “real” end of the Roman Empire.

Evidence: No one knows why he took the title, but the world Basileus (used sometimes in Classic Greek as the name for King, but not always) was adopted by all the Hellenistic Successor states as reflecting their royal dignity. In Judith Heron’s book, she mentions that in the lat 8th or 9th Centuries in Constantinople nobody remembered why the Senate building was named “the Senate”, and one contemporary “scholar” conjectured it must have been built by somebody named Senatus, so fargone had their own memory of continuity had fallen. He probably adopted it as a reflection of the “Greek-ization” of the Empire, and the fact that he by himself (like a Hellenistic king) more or less won the 20 year war against the Persians; but who knows.

Posit: Hannibal was a jerk to Scipio when they met.

Evidence: Why u mad, Hannibal?

I love to think about where we’d be in the world if the Roman Empire at its peak had not disintegrated (hopefully slavery and persecution would have ended due to general enlightenment).

What kind of planet do you all think we’d be sharing? 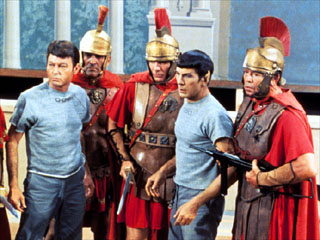 Utopias don’t exist. And they never will.

Did the legionaries go commando under their battleskirts?

I always thought he was off-base. The Pope held the title Pontifex, but the Imperial title walked east and fell in 1453. Anything else is a successor not an continuation, IMO. But it’s all highly (and entertainingly) debatable.

I don’t think Dick meant it literally, of course. As someone who has read about 15% of the published Exegesis (so far, I’ll get back to it I swear), it’s an open question how seriously he took any given one of his “visions”.

I read Neil Faulkner’s Rome: Empire of the Eagles a couple of years ago and recommend it heartily. A socialist, Faulkner does an excellent job of portraying Rome as basically a violent gangster state.

Based on his repeated and recounted statement of the impact of the to the “Flow My Tears” incident on him, I’m in the camp that thinks he took them very seriously.

I agree. He believed that our reality was a hallucination. And that he got glimpses of the true reality. We are in The Black Iron Prison, a system of social control.

Overall, yes, but he changed his ideas of the bedrock meaning of them quite a few times. His original vision was of the Roman Empire, but over time it was transmuted into the Black Iron Prison, etc. He knew something strange and wondrous had happened to him, but I’m not sure he ever definitely decided what exactly it was. Valis of course was his final word on the subject, but potentially only because of his untimely death.

It’s all relevant @RichVR. Heck, his hallucination I referenced was a hallucination that occurred in the Ancient Roman Empire. ;) Edit: as interpreted by that Episcopalian Bishop.

And I’d agree to that, @Kolbex

His original vision was of the Roman Empire, but over time it was transmuted into the Black Iron Prison, etc.

My understanding is that these were all layers of malleable reality. He really was digging down to the bedrock of what was and was not “real.” He believed that a spirit, perhaps ‘the word of God’, was released from the scrolls at Nag Hammadi. That gave him hope.

So one thing that increasingly irks me, is the presentation of the dark ages.

Just because the WRE ended, did not mean the death of technology and knowledge in the West. What it did mean was an end to large scale civic projects, as the fragmented new reality could only cope with projects of a certain scale, and aqueducts, heated floors, and public baths were not feasible in the smaller successor states.

Even the ERE was unable to improve, or sometimes even maintain, the city walls around their Capitol, simply because the resources of a continental empire were not at their disposal.

That said, while I respect the notion of the 1453 end, I personally take the stance of Mike Duncan that the empire ended when the last Western Emperor abdicated and fled to Dalmatia in 475.

The reason I find so is because the ERE transitioned from culturally Latin to culturally Greek. And conducting the business of state in Greek is a sufficiently distinct difference I find it useful to separate the two.