It is confusing a bit because Ms. Marvel was originally the female version of Captain Marvel (who used to be a man but got rebooted to a women)

Not quite. A quick primer on the various Marvels in Marvel Comics:

The first Captain Marvel owned by Marvel was an alien Kree soldier named “Mar-Vell” who came to Earth to fight evil, etc., taking on the name “Captain Marvel”.

Carol Danvers is caught in an explosion with Mar-Vell, and gains some of his powers. She takes on the name “Ms. Marvel” in 1977.

The first Captain Marvel (the alien) would die of cancer in 1982 in a big comic-book event… and remarkably has mostly stayed pretty dead… though of course as noted above, Marvel Comics is obliged to roll out a new Captain Marvel every few years to keep the name going.

The character of Monica Rambeau was actually the first female Captain Marvel, back in 1985, before changing her name to “Photon”.

In the 90s and 2000s, the moniker “Captain Marvel” has been borne by Mar-Vell’s son/clone, his son/clone’s sister, a brainwashed Skrull, and another Kree soldier.

Meanwhile, Ms. Marvel (Carol Danvers) was a mainstay in The Avengers, still bearing the name “Ms. Marvel”. The character kind of disappears for a while after a seriously weird story-line in Avengers #200, and in 1981, the X-Men villain “Rogue” steals her powers. The character goes through some changes and ends up being named “Binary” for a while.

There were a couple minor characters who bore the name briefly (again, to protect the trademark) as Carol Danvers cycled through various power-sets and names.

In 2012, Carol Danvers takes on the “Captain Marvel” title and has held it ever since.

In 2014, the character of Kamala Khan – a Pakistani-American teen – took the name “Ms. Marvel” since she idolized Danvers and knew the name wasn’t being used.

And I think that’s up-to-date. Thank you, Wikipedia.

Okay this trailer got me to reinstall Marvel’s Avengers. Well done, trailer.

Also, to be super-specific, the Carol Danvers Ms. Marvel technically was a spinoff, not a reboot, of the male Captain Marvel/Mar-Vell - she got her book while his book was still running.

Isn’t Quasar an iteration of Cap Marvel that was concurrent with the Danvers version of Ms/Cap Marvel?

So if you have heroes that either are named Captain Marvel, or change into a superhero with the shout of a magic word, you could probably fit them into a single picture. 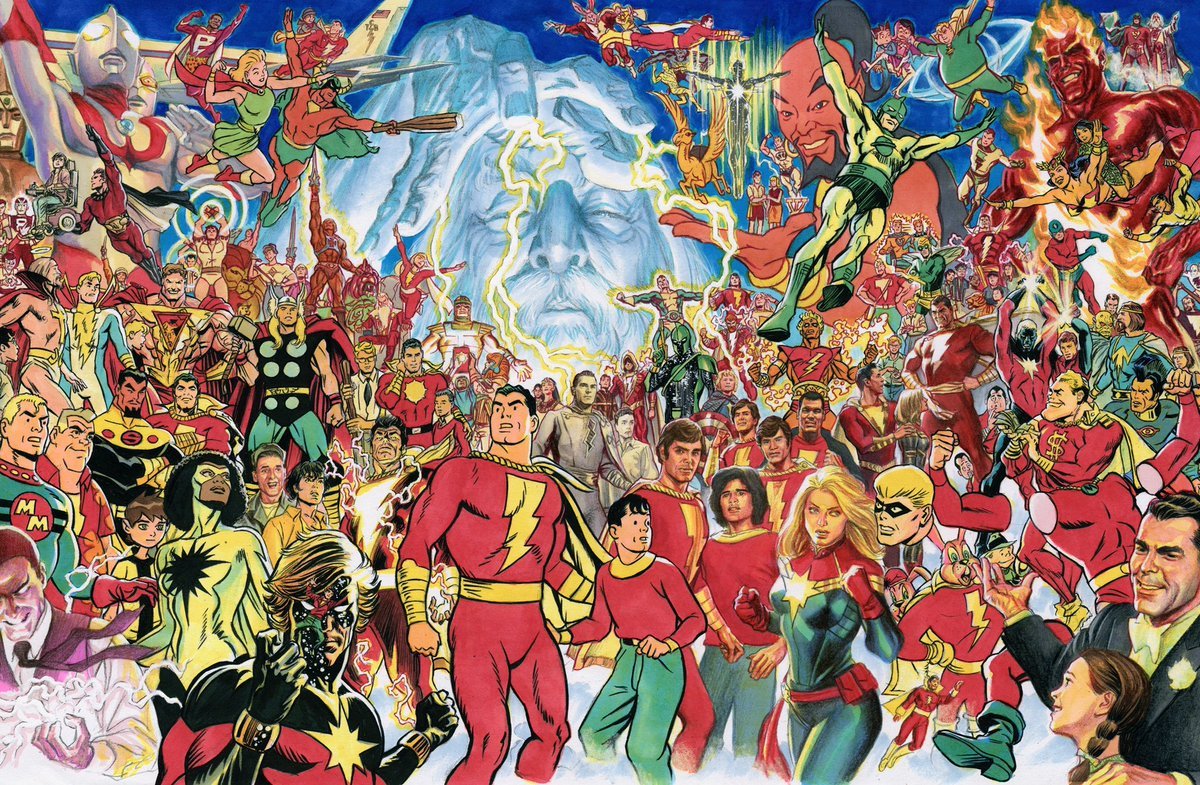 (Though Ms. Marvel Kamala Khan isn’t represented here because… she always has her powers and isn’t a captain yet?)

Personally I was super impressed by @Tin_Wisdom’s knowledge on the subject, although his “”Than you, Wikipedia” did take it down a notch or two.

I’m sure that was just to clarify a few references.

He had a lot of familiarity.

I can remember almost every detail of obscure mid-80s X-Men plotlines, but someone asked me what my daughter’s middle name was yesterday, and I was stumped.

Perfectly understandable. I think many of us here would have similar stories to tell. ;)

someone asked me what my daughter’s middle name was yesterday, and I was stumped.

Why would that person care what your daughter’s name was yesterday?? Is it different from today???

A quick primer on the various Marvels in Marvel Comics:

Well now I don’t know what my place is here if it’s not explaining comics lore to movie nerds.

This is perhaps the understatement of the year. They wrote Ms. Marvel out of the comics in a spectacularly horrible way that I won’t even get into here.

Mar-Vell was a male alien who came to Earth and took on the superhero name “Captain Marvel”. In the MCU, the character was switched to a woman and played by Annette Bening (although she was never a superhero in the MCU).

In the comics, there was an explosion that gave Kree powers to Carol Danvers, and she took the name Ms. Marvel, and later changed it to Captain Marvel. In the MCU, basically the same thing happened, but she skipped the intermediate name.

In the early '80s, Captain Marvel (Mar-Vell) died of cancer.

In the mid-'80s, Monica Rambeau got powers and took on the name Captain Marvel, and later went by other names like Photon. In the MCU, this character is played by Teyonah Parris. She doesn’t have a superhero name yet.

In 2013, Kamala Khan got powers and called herself Ms. Marvel. That’s who the new series is about.

They will all appear together in Captain Marvel 2 next year, titled simply The Marvels.

Ms. Marvel (Kamala version, who named herself after the original name of Carol Danvers’ hero identity) got her powers in the comics from the Terragin Mists. I’m guessing they just didn’t want to get into the whole Inhumans thing here, thus the retcon there.

However, her powers seem to come from wristbands, so looks like an homage to Mar-Vell’s nega-bands.

You totally left out Genis-Vell, who I actually liked. :)

Okay this trailer got me to reinstall Marvel’s Avengers. Well done, trailer.

Nothing would make me do that. I’d sooner just replay the excellent Guardians of the Galaxy. I’m sorry the trailer did that to you.

To be fair I got past the part I was stuck at and am having fun again.

You totally left out Genis-Vell, who I actually liked. :)

And let’s not forget Noh-Varr, a.k.a. Marvel Boy.

Marvel published some comics about 20 years ago that had long text descriptions of the histories of each character. They were absolutely ridiculous and insanely complex and showed why it might not be a bad think that DC reboots its characters every decade or so. Spider-Man’s history was insane, for instance, given that every storyline that’s happened to Peter Parker since the 1960s ostensibly happened to the current Parker over the past 10-15 years.

I felt varm and fuzzy inside, seeing the trailer, and my GF said, it was impossible not to love Ms Kamala Khan a bit after watching the trailer. Looks great!

Oh come on, somebody recount the horrible way she was written out of the Avengers. I dislike the MCU incarnation of Captain Marvel enough to want to read about dismemberments or something.

Why would that person care what your daughter’s name was yesterday?? Is it different from today???

You do not change your daughter’s name on a daily basis?! How strange.

I named my daughter a TOTP code and check my phone every 30 seconds to see what six digit number to call her.