Shout Factory claims you will be able to see the new season of MST3K on their streaming service. Do they mean the new new season? The one that isn’t done yet?

Edit: Ah nevermind. They just point to Gigaplex or whatever it’s called when you click on the new season.

My god you guys. The Batwoman. My god. So terrible.

That said I think Emily is now my favorite host.

Wow you guys. The Bubble. Might be the worst movie they’ve ever covered.

HE IS FILLED WITH TURTLE MEAT.

You know, they said that at the start, but it wasn’t that bad.

I actually thought some of the ribbing dialogue between the husband and wife at the beginning, although sometimes veering into awkwardness, was kind of charming–and way more characterful than a lot of MST movies manage.

What was specifically awful about the bubble is that the premise had no there there. The creators just didn’t know what was going on. It was basically Lost, forty years earlier. And shorter.

Monster A-Go-Go was vastly worse than The Bubble, and even had a more anticlimactic ending.

God it’s been so long since I’ve seen that one I might’ve blocked it out. 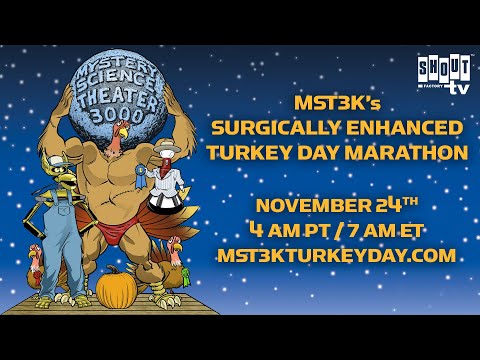 Having a family that wants to talk and eat on thanksgiving feels very inconvenient right now. It’s too bad MST didn’t replace watching american football with my extended family, I’ll be stuck with that on the TV instead all day.

Oh well, I can sneak some in for an hour or so now!

My family does Thanksgiving at the weekend, and I’m working from home, so it’s non-stop MST3K for me.