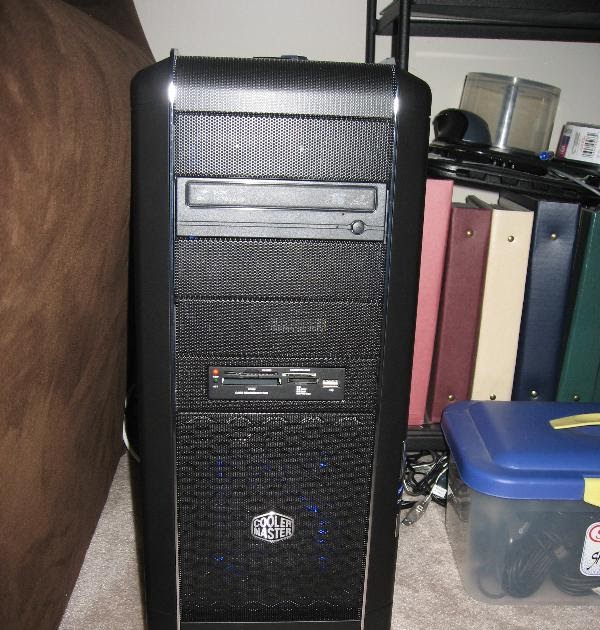 So I finally decided to bite the bullet and replace my aging Athlon XP 2200 socket A HTPC. It could barely handle any high definition conte...

Though I’m using it as my HTPC it wouldn’t be a bad gaming pc if I just put in a better video card. I already had my old 8600gts just sitting in the closet so I just used that.

The last Intel system I built was a p3-1ghz (been on AMD since then). It was a pretty pleasant experience (the building, vista…not so much. ok ok it’s a bit less horrible than I expected :-).

Anyways, I hope some of you find the information helpful if you are thinking of building something similar.

I built my HTPC for roughly half the price, it’s totally silent and plays 1080p video just fine. Those are the only benchmarks that matter, unless you plan on playing games on the thing. Well, would be nice if it were smaller.

Ok yeah it’s over spec’d and I do plan to do some gaming (got steam and guild wars installed right now) just not a lot. I also expect this thing to last a minimum of 7 yrs.

I’m a .net windows developer not a linux one. I run my own pvr software so I needed a windows platform. I’m weird like that. I often see deficiencies or get frustrated with what is out there so I just pull out the compiler and write my own dammit!

If you’re doing HDMI I hear the new HD3000 series of ATI cards does audio passthrough over HDMI, they are supposed to have pretty decent performance to boot.

why not? because I can! I go for value not always the cheapest part that will do.

Because electricity costs money and you’ve just jumped the budget up about 30 watts * 24 hours * 7 days per week? Also, heat = noise.

I agree with you on the memory, but excessive CPU is just dumb on a HTPC. It’s actually even dumb for a gaming box, since 95% of performance is the video card.

Because electricity costs money and you’ve just jumped the budget up about 30 watts * 24 hours * 7 days per week? Also, heat = noise.

I agree with you on the memory, but excessive CPU is just dumb on a HTPC. It’s actually even dumb for a gaming box, since 95% of performance is the video card.

Well this machine not only plays back but it’s also a recorder that also does comskip in the background. I’ve got some files here that are pretty nearly maxing out one of the cores (20-35 mbps x.264 1080p, ffdshow is multi threaded but it seems most of the decoding is done in one of the threads). Maybe something is going screwy here with vista and my setup. But it shows this with VLC too which uses it’s own internal filters.
EDIT: I uninstalled ffdshow tryouts beta 4 and installed the latest clsid nightly build and it made a HUGE difference. Load is much more evenly spread among the four cores using around 22-40%.

As for gaming and cpu scaling yeah that’s why when I oc my opteron 170 from 2ghz to 2.7ghz my crysis framerate almost doubled (yeah I know this is heavily dependent on the game but multi threaded game engines are the future! I just got in the latest maximum pc issue and guess what cpu they chose for their $1500 build…q6600! yeah I know they weren’t building an htpc though, heh). Hmmm come to think of it Crysis would be sweet on this machine on the 52" hdtv. I might invest in a faster video card for this box in the future.

Actually a 3.0ghz e8400 wolfdale might have worked better.

So yeah I don’t think I over did it on the cpu. You guys just aren’t pushing your machines hard enough with the right content :-) Sure it’s used as an HTPC first and foremost but I like having the idea that I can do pretty much anything else on it too including gaming.

If I wanted to really make a dent in my electric bill I would have just got a Tivo or something. I think those things draw maybe a quarter of the power of a typical PC. But then you can’t do all the other cool things a full blown PC can. I have a killawatt. My old athlon xp would idle at around 121 watts. This new machine is 156 watts idle (speedstep kicks in and drops the multiplier down to 6X) and under typical load (watching a recorded HD mpeg2 TS file) it’s about 185 watts.

At around 10 cents per kw hr it would cost about $9-10 per month in electricity to run my old pc. I don’t think the extra $3-4/month are going to break the bank.

Oh and this new machine is actually more quiet than my old one. Those enermax 120mm fans really are quiet! Also, the motherboard is completely passively cooled so no additional noise there.

Isn’t that the best part about building your own pc. You get to pick and choose the exact parts that you want that match your own peculiar likes/dislikes/priorities. It’s all good man.