So the last space sim I played was X2: The Threat. I dabbled with an indie one where you can go into the atmosphere and buzz cities and clean solar collectors … Evochron Renegades I think it was. Pretty cool but might have actually been a bit too open, as I felt directionless.

I’m in the mind to start up a pretty space sim, hopefully with good atmosphere, and openish world, and some kind of overall plot. I’d prefer something that plays decent without a stick, but if it’s good enough I’ll pick one up. I do have a gamepad.

Are there any that have come out recently that are good? I occasionally see something on Steam that looks interesting but haven’t bit the bullet yet. 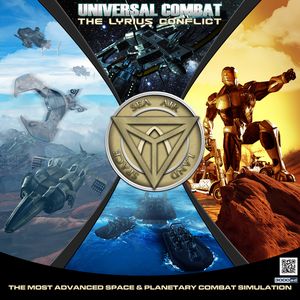 The Future of Intergalactic Warfare

Well, I was going to come in here and say X3 or Evochron but … seems you got those covered.

Darkstar One was the linear story-driven one where you upgraded your ship organically, should be able to find that fairly cheap. Supposedly not bad, except for that part where you don’t really get to swap out ships.

Well, I was going to come in here and say X3 or Evochron but … seems you got those covered.

Darkstar One was the linear story-driven one where you upgraded your ship organically, should be able to find that fairly cheap. Supposedly not bad, except for that part where you don’t really get to swap out ships.

I would second those two suggestions: X3: Terran Conflict, I feel, is a very nice upgrade over X2. Also, I’ve heard that Evochron Legends is also a nice increase in playability from its precursor. I wasn’t a huge fan of Darkstar One because of its linearity and the inability to swap ships (my advice: think of it as an RPG, with the ship as your player character), but others enjoyed it.

Otherwise, it seems as if space games have pushed toward 4-X &/or RTS.

Ugh, the man said good. Freelancer felt like a coin-op shooter to me, with a bizarre planets-hanging-in-space-connected-by-subway “universe” that made my brain sputter.

The best ones, in my opinion, are still the Wing Commander series (1-4 if you can stomach old tech, or Prophecy if not), Xwing Alliance (there are many cool graphical mods if you have patience), FreeSpace 2 (also tons of very recent mods), and Independance War 2. I wish I could also say StarShatter but I hit too many strange bugs.

But yeah… recent? The lack of those are what pushed me (very happily, I must add) into flight sims, WW1 and 2 especially. Try Wings of Prey.

Freespace 2. With the FSO project, you can download a 100k exe, which will install the entire game with all the latest visual upgrades. It’s like playing it again for the first time.

Charles, you tempt me, sir. I’m unfamiliar with the Freespace 2 or “the FSO project”. Should I just start Googling or do you have a good reference on hand?

Unfamiliar with Freespace 2? For shame.

After looking it up, it seems they don’t automatically install the game data anymore, likely because GOG is selling it now. However, once you acquire Freespace 2, you can see this link below.

IMO X2 was the last good one. X3 Reunion was slow and boring comparatively. Maybe it got better with Terran Conflict, but I lost faith before I tried it.

It might be worth while to break the ice on Evochron Legends. I think that one is the latest in the Evochron series. I’ve heard a lot of good things about it.

Descent Freespace, Freelancer and Wingcommander, all the same imho.

X3 is a different beast, but there are more, two russian ones if I recall correctly, I’m sure gamersgate has em

Heh, seems like all the bases have been covered. ;) There are some other modern space sims – Star Assault, The Tomorrow War, Darkstar One – but you said good. ;) One recent one I liked is Spaceforce: Rogue Universe. I also love, love, love Parkan 2.

Other good recent ones already mentioned are Independence War 2, Evochron Legends and of course, the pinnacle of space combat games, Freespace 2. I’d also recommending searching for Terminus, Klingon Academy, Hardwar, Tachyon: The Fringe and any of the X-Wing or Tie Fighter games. If you’re going for Wing Commander, stick with 3 and 4.

I honestly enjoy Freelancer a lot…but it isn’t a space sim at all. ;)

Did I mention these are my favoritest types of games ever? ;)

My god that game was completely awful on every level.

I did love Parkan 2, played the hell out of it. It’s kinda limited, sure, but once it clicks, as it did early for me, it’s a ton of fun.

Unfamiliar with Freespace 2? For shame.

It was released during my gaming hiatus while I traveled outside the country and, unfortunately, it was just one of those things that I never picked up on my radar, despite spacesims being my favorite genre.

Sounds like I’ll need to go pick it up from GOG :)

Sounds like I’ll need to go pick it up from GOG :)

Dude, totally. Freespace 2 is the pinnacle of the genre. Install that and the FSO additions linked to earlier, and enjoy not only some of the best space combat you’ll ever see, but one of the best stories in the genre…or any genre, really…

And this totally isn’t funny. The man said “good”.

Sadly not anywhere I could find, but with GoG snagging Atari, who knows?

Charles, you tempt me, sir. I’m unfamiliar with the Freespace 2 or “the FSO project”.