I’m looking to compile a list of games that enable and/or reward and/or promote the exploration of natural spaces – with a strong preference towards non-violent games. For example (not saying this is good; haven’t played):

Things like the bird watching in Red Dead Redemption 2 also are of interest: 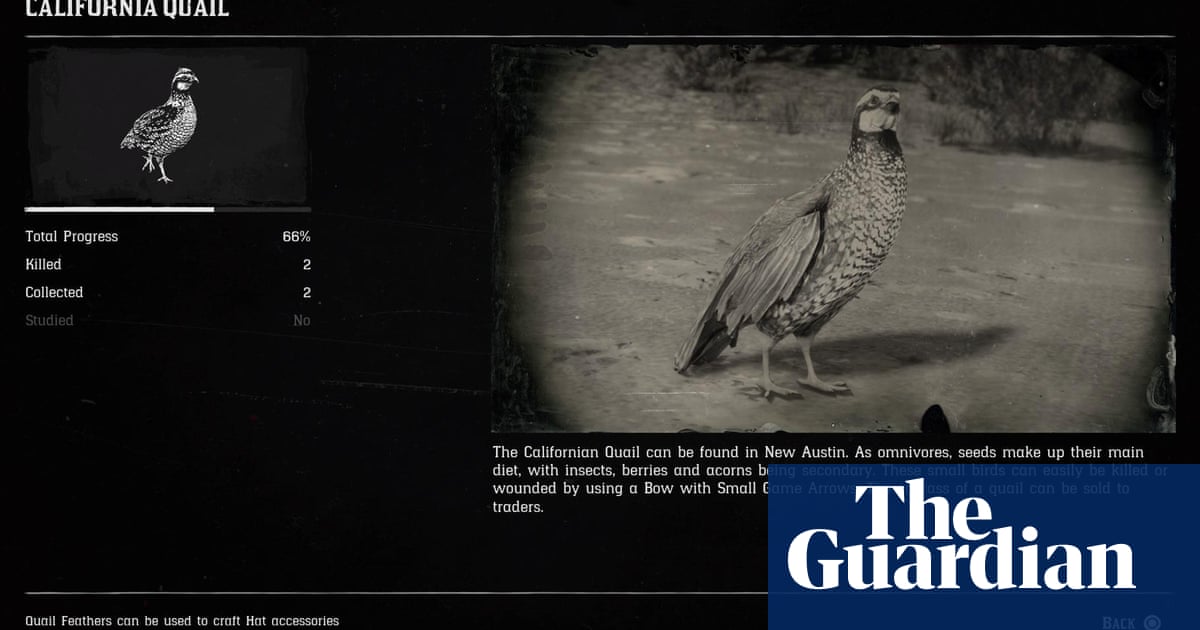 Birdwatching like it's 1889: my bird odyssey in Red Dead Redemption 2

In the hit video game, a birder finds joy and despair in a realistic portrayal of wildlife in the pre-conservation era

What else comes to mind?

You explore a wildlife preserve modeled on the massive Masai Mara and take photos of animals for an assignment for a magazine modeled after National Geographic. Good game, and really lovely for its time.

Awesome! I vaguely remember hearing about that game and being interested. I’ll have to do some digging. Thanks!

A Short Hike is a very nice experience. Short, but also a hike. :D

I’m mainly focused on a subset of nature exploration, specifically of the underwater variety. But each of these is a fairly low-stress exploration and investigation experience that I enjoyed quite a bit.

First, on the Wii there is Endless Ocean - Blue World, which has your character opening a scuba diving exploration company, taking you to many spots around the world seeing many undersea sites, with interesting flora and fauna. I wish it weren’t just stuck on that platform, but I think it can still be found fairly easily (and cheaply).

Then more recently there were two I liked a lot - Abzu is a more fantastical game, in that the environments and situations aren’t really things you could expect to find in any oceans on this planet. But it’s still cool for swimming and finding amazing things to look at and interact with. And then there was Beyond Blue, which is a more realistic exploration game, even allowing you to find some mining gone wrong that is wreaking havoc on the local environment. But it’s still really cool for showing you an actual environment and its inhabitants and allowing you to swim and investigate at your leisure.

Some off the top of my head:

There’s Never Alone, which had fallen off my radar until I saw it in a museum exhibit(!) in Chicago this summer.

Proteus is extremely chill and a favorite in my family.

Kind of cheating, but Firewatch.

Oh darn it! 2 years ago I could have rattled off a bunch of things, but now I can’t think of any!
There is always Hunter Call of the Wild, but your end goal is to shoot and mount them.

In Animal Crossing you do try to catch every fish, and then you get to mount them and put them in your house.

It feels like the games that are best at this (and make exploration the most enjoyable) are rarely games that are about exploration first and foremost. I don’t know why that is. For me they tend to also be games that have combat that can be completely ignored with little effort. RDR2 is probably the GOAT here.

Other games that I have spent way too long exploring the environments - Shadow of the Colossus, Snowrunner, and Death Stranding :P

Experience the wild as a mother badger sheltering her cubs from harm. On their journey th

IIRC, there is exploration, but it’s primarily a survival simulator where you need to protect your cubs and raise them.

Walden, based on Thoreau’s book.

If you don’t mind the lack of graphics, UnReal World is the best in class in my opinion,

It is free on the developer’s website, and if you fall in love with the game you can send a tip through Steam.

There was this weird game Tom played once on Stream (i think it was a request?), where he was looking for mushrooms and other things, although it was hinted it was a survival horror and that you were preparing to survive as a prey in Predator. Can’t remember the name of it, it was on Gog too.

There are a lot of Japanese only games of the sort as well, but I do not know if you’re interested in listing those.

It’s not out yet, but this looks a lot like Call of the Wild/Way of the Hunter, but without the hunting:

Morels: The Hunt on Steam

I love that people can make games about hunting for mushrooms. So niche, but also perfect for the question I posed.

By the way, turns out this is on the Quest, too, as Morels: Homestead:

The Long Dark is more about survival than exploration, but it has some spectacular natural locations to discover (and freeze to death in).

I’m looking to compile a list of games that enable and/or reward and/or promote the exploration of natural spaces – with a strong preference towards non-violent games. For example (not saying this is good; haven’t played):

Subscribed. I have long wished for an open world game focused solely on exploration and navigation across the landscape with routefinding, hiking, navigation, climbing, survival, camping, etc. It doesn’t exist. I own Call of the Wild: The Angler and really like the landscape and exploration part of it. The fishing is eh. theHunter: Call of the Wild provides a similar experience, though the Angler’s initial (only so far) map is just enormous and looks so much like the actual Sierra Nevada that it hurts (though it’s set in Wyoming.)

Snowrunner actually comes pretty close to the experience I want. Gorgeous natural landscapes, a sedate pace, and progression focused on exploration and opening up areas.

Microsoft Flight Simulator 2020 doesn’t allow exploration from the ground, but is great for airborne exploring and has the entire real-world Earth for you to experience.

I think RDR2 and Horizon: Forbidden West provide great opportunities for nature exploration, but you have to play a whole other game to open up the map and they’re certainly not non-violent.