Training camps are underway, NBA 2K14 is out this week and we’ve less than a month until the season tips off… so it’s about time we had this year’s thread to occasionally post things in.

Will Dwight grow up and just play the game? How bad will my Lakers be? What the goddamn hell is going to happen in Brooklyn? What’s the fate of Rondo in Boston? Out of Cleveland, Washington and Minnesota, which potential playoff team will fight off the injury flood and actually make it? The T-Wolves and Wizards have already had depressing news in that category. Can you name one reason to watch the Atlanta Hawks? How many more solid rotation players will the 76ers discover have real and in no way made up injuries that take them out of action for roughly half a season? Yes, in a season where the top teams are probably going to be very good, the bottom teams are going to be really bad. We’re rigging for Wiggins!

The main reason I posted the thread now though, is this: Andrew Bynum… CUT HIS HAIR! 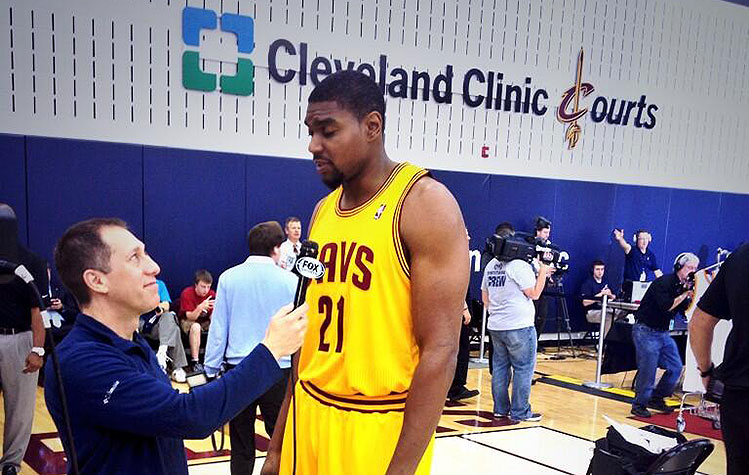 I’m actually rooting for Bynum to get back to his 2012 form. I like watching low post work like that. Also on the recovery boat, I am really hoping we see Rose back to his best by the all-star break. He’s my 2nd favourite player and I can’t wait to see him back at work. I’d love it if the Bulls came out the gates full speed and ruined Miami’s ring ceremony on opening night, but that’s probably a bit much to ask. Speaking of favourite players, Kobe’s injury after that awesome season was quite depressing so I’m hoping he can still do Kobe things for his final couple of years and doesn’t return a shell of his 2012-2013-self.

The Lakers? Jeanie just trashed her brother in print - running anything by committee doesn’t work as well as having someone with a consistent vision and plan running things. Jerry did the Lakers a great disservice by splitting the team rather than giving control of it to the most competent (my vote goes to Jeanie, not that my vote counts for a thing). But even assuming that at some point they all pull in the same direction, this year is a write off. Just about everyone’s contract is planned as expiring at the end of the year so next year they can run wild with offers. God only knows why LeBron would consider for even a moment leaving Miami, but that’s next year.

Kobe may be the most dedicated player ever off the court, but at some point injuries just become a little harder to come back from as your body ages. You’re just bit slower, less physically able. Still not sure when he’ll even be back. Lost our center, or power forward depending on how you look at it. Lost our small forward, but not sure if that amounts to anything. Nash looked like crap last year, D’umbtoni even worse. Maybe if Nash can establish his game with Kobe out, an continue once Kobe comes back, and if anyone can come back and return to a high level it is Kobe, and Gasol not shunted side for the New Non-Franchise Franchise Player…

Still. not lot of expectations. Yeah, they could surprise, but I’m not counting on anything.

Far more interesting are the Clippers (about the most shocking statement in the history of Los Angeles sports). Paul basically put a gun to Sterling’s head and said dump Del Negro and get me Doc Rivers. They balanced the team better with some backcourt outside shooting to spread the court better for their inside players. And well, Doc is an upgrade to Del Negro. The expectations could not be higher - the pieces are in place, the talent has had time to mature, they have the coach that can make the difference. Anything less than an appearance in the finals is probably viewed as underachieving. But Griffin and Jordan have to find that other gear that they have been missing - that’s the difference between a really good team that can compete during the year, and a team that has a realistic chance at a championship.

Oh, and damn, thank God almighty that Bynum dumped the do.

My problem with the Clippers is that I just enjoy watching the Grizzlies beat them oh so very much. I like highlight plays as much as the next guy but I loved seeing Memphis grind over them with defence and old-school offence.

I knew I forgot a major question in my first post - This season, will anybody figure out what the fuck Kendrick Perkins actually does on the court? Because, based on the series vrs the Grizzlies, it’s sure as hell not “play basketball”.

Although my beloved Celtics will not be able to take advantage of it this year, I am really excited about the NBA Finals going back to a 2-2-1-1-1 format.

Lakers Update: More disarray: D’Umbtoni pretending like Gasol didn’t suck last year because he shunted him aside, Kobe gets more knee treatments and still no real idea when he will be back, everyone still has a one and done contract.

Clippers: Griffin notes “Lob City” is done, Rivers emphasizes defense. Whether Griffin and Jordan buy into it in reality is the real question, but Rivers is pushing Jordan that defense and rebounds come first.

Sad that the Lakers and Celtics are going through convulsions, but that’s what happens to old teams.

My League Pass sub seems to include the pre-season this year, so I watched the Bulls & Lakers open things up against the Pacers & Warriors. D. Rose looks quite excellent physically, just needs to shake the rust off and get back into playing the game. He exploded at top speed several times, which was great to see.

The Lakers won their first pre-season game since october 2010, so clearly we’re on the roll to a ring! Hah. I don’t expect us to win that many games but if we can at least keep most of them close, I’ll enjoy watching whoever makes the team scrap and scramble along. Could be fun, if nothing else.

Oh yeah, and Dwight got ejected in the Rockets first pre-season game. Words fail me.

Pacers vs. Magic, Heat vs. Bulls, Lakers vs. Clippers! The season begins!

I forgot the assholes at Fox Sports have canned color commentator Matt Guokas. Craig Sager is still a free man, yet my favorite wry announcer is out of work. Fuck the NBA.

The Laker bench whacks the Clippers in the fourth quarter? So well that no Laker starter ever took the floor? Wow.

I’m actually rooting for Bynum to get back to his 2012 form.

So am I - I picked him up in all three of my fantasy leagues. Total cost: $2 (got him off waivers in the third).

That Lakers game was just awesome, the 4th quarter in particular. The bench outscored the Clipper starters and put up the 3rd most bench points in Lakers franchise history! Lakers beat the Clippers after going 0-4 last season!

Once reality returns (probably tonight against the Warriors), I am expecting (and hoping) things to go more like the first 3 quarters - a close and entertaining game but usually the better team will beat the Lakers. Well I don’t hope for the beating part but obviously I’m being realistic about this! I’m sure the Clippers (and the rusty Bulls) will get on track soon enough.

On another note: Bynum’s cleared to play tonight and might get 15 minutes. I don’t expect him to look much like Bynum for at least a month but progress is progress.

Edit: The 76ers, a team so blatantly tanking that they’ve shut Noel down for the entire season, is up 23-2 against Miami!? At this rate the GM will put Evan Turner and Thad Young out for the season with sprained ankles, just to be on the safe side.

Yeah, I don’t put a whole lot of credit into the first game of the season. Still, it was amusing to see poor Doc wishing they could cover up the scoreboard rather than all those championship banners.

The Bulls should come around. Heck, if Bynum can stay on the court, eventually he will come round (though usually he has forgotten how to play basketball after a long lay-off and takes a month or two to remember how (and, alas, I’m not being facetious).

Edit in: And Bynum is in! Looks reasonably mobile.

Miami and Philadelphia is a game of extremes; with 20-point swings in the first and second quarters. In the third quarter, the two teams combined for 79 points and Miami getting the edge finally. Crazy, crazy game so far.

More of this please, DeMarcus Cousins.

Dwight Howard, roadkill at the Staples Center. The Clippers ran him over and left tread marks.

Lakers play Smite-a-Dwight and D12 bricks his way to a loss!

Lakers play Smite-a-Dwight and D12 bricks his way to a loss!

Just finished that - rather fun despite the scrappy periods and the League Pass version going from 8min left in the 2nd to 2 min left and then playing the missing chunk between the 2nd and 3rd… Hacking players still sucks but it’s amazing how much calmer I feel when the abysmal free-throw shooter continuously going to the line isn’t a Laker!

I’m liking Johnson a lot so far. Lots of hustle and some good defensive moments, plus solid bench-level offense. Also really glad to see Meeks has really improved his driving game this year. He’s much more in control and is making better decisions than his rather trick-or-treat attacks on the basket last year!