Nebuchadnezzar - constructing Mesopotamia one brick at a time.

Mine too. The walker stuff in the Impressions games never appealed to me so I bounced off most of the builders in that era. I liked the first two Caesars but then it was pretty much just SimCity for me up until Children of the Nile.

What’s the pedigree, exactly? Do the designers have a resume at all? Actual question, I don’t know who designed it.

If the pedigree is just “this is kinda like these other games that other people made 30 years ago,” that wouldn’t make me enjoy it any more.

Yeah, sorry, no strict pedigree in terms of the team, just the design philosophy. Doesn’t mean it has to be good, just that it may appeal to the sensibilities of, well, us older folks familiar with that particular style.

Other than 2D graphics and the time period and sort-of looks of the game, it pretty quickly loses any nostalgic feel of Impressions city builders. It pretty quickly doesn’t feel like one of those at all. Not much of a pedigree, other than superficially.

It does try to do some things that are different, but they don’t appear to have done enough playtesting on those things at this point. (One thing I noticed in my two hours before refunding: because of the way the spheres of building services work for your population, you tend to group buildings together which means that your city always kinda looks the same.)

The game just feels bland. There’s no people just wandering around – you don’t see people walking to their jobs, for instance. You really only see walkers on the roads once your city is built. I’d say that if you can skip this to wait for the Pharaoh remix, do that. This might be fixable in the future at some point…but I’ll let someone else find that out.

Thanks for the impressions, Trigger. A shame! The Pharaoh remake will be nice to have, but also a game I’ve played. A pseudo-Impressions builder in a new historical period sure would be welcome.

I do applaud them for wanting to try some different things. I just don’t think that at this point those things necessarily work really well.

I’d say that if you can skip this to wait for the Pharaoh remix, do that

The what?! Wow, I only just heard about this. It looks great.

So I am playing Zeus again. Man the control and graphics of this aged game… ouch. It reminds me of what Emperor brought to the table though. Aside from MP, which I am still hopeful for for these type of games, and game music I loved, I’m not the type of person to listen go my own music when playing a game, it introduced the population actually caring about a diverse diet. I am pretty sure that’s the that required a like 3 or 4 different types to elevate their lives from a bland diet.

I mean crisp graphics, modern UI… and some depth would be great. I hope at least some of these game are taking the highlights of the other games into consideration.

Are you playing Zeus with the high res patch? It borks up a number of UI screens (but not to an unusable point), but it feels really nice to see soooo much of your city at once.

I like the music in all the Impressions games. Or, at least, it’s so thoroughly bored into my skull at this point, I couldn’t shake it if I wanted to. There’s not even that much variety, but I think there’s an art to making music that’s just ambient enough that it can basically loop forever without getting irritating. (Somehow Pharaoh’s music is this way for me despite having shrill whistles in it.)

Are you playing Zeus with the high res patch? It borks up a number of UI screens (but not to an unusable point), but it feels really nice to see soooo much of your city at once.

I had no idea this existed. Thank you! Maybe i’ll finish Zeus and Poseidon this time. I actually have the original disks and box, I think, for both of those. I have too many games I haven’t finished but there is a relaxing yet still challenging quality to the city builders that are not Anno.

For me, Impression games were the games I could buy if I have I think it was 20 or 30 dollars and that’s all I had for like a year or half a year. I needed a game that would run on my not to of the line computer that would also not disappoint, and they always held up. I know I beat all of Pharaoh and Cleopatra, Emperor but Zeus/P I think ran into another game, so I never actually finished it. COTN… don’t think I did all those. At some point it played itself and felt the same.

I’ve looked up some discussion on Nebuch here, and I think they plan on doing more with it, scenarios and such. We’ll see, but if it’s lacking that nitty gritty detail suck… scenarios won’t fix that. 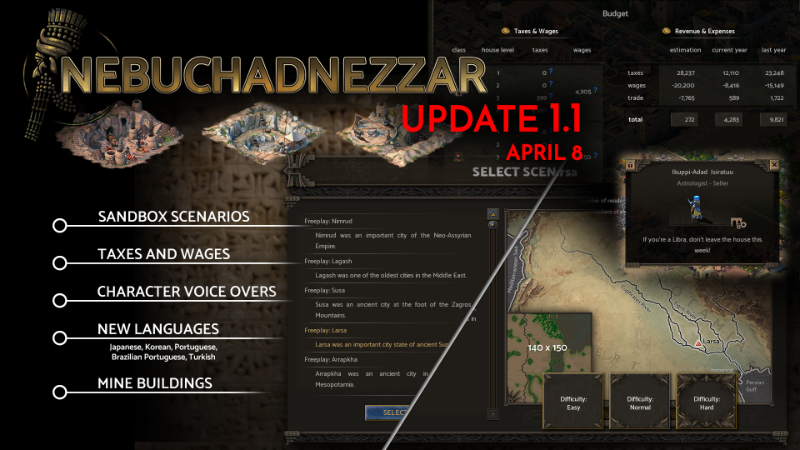 Today is a historic day for Nebuchadnezzar as we release the game’s very first major update!

Has that fixed a lot of he issues people had with the game?

How much time you got to burn to find out? You can either get it in long-form direct from a veteran of the Impressions city-builders, who detailed their complaints about Nebuchadnezzar in a prior video. Who has subsequently gone back to re-evaluate the game with the recent 1.1 update and update their opinion of Nebuchadnezzar. 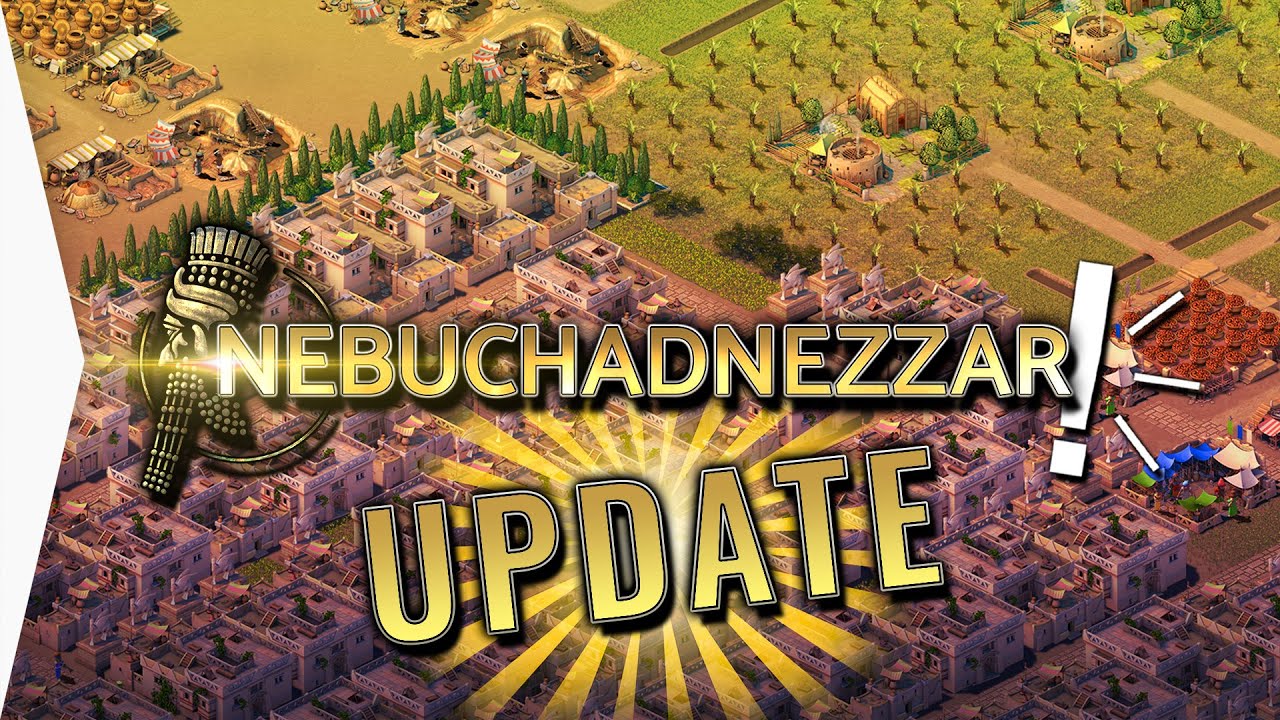 Or I can give you a rather for brief paraphrased summary if you so desire. Essentially, TL:DR, the 1.1 update fundamentally improves the game greatly through the addition of aspects like Wages and Taxes. Game still has areas for improvement and needs some rebalancing in places after the 1.1 update’s new gameplay additions. All in all though, a good improvement to the game that added some much needed challenge and depth.

Developers have been hotfixing the game to resolve some of the rough edges introduced. Ergo some balancing rough edge have been improved between the initial 1.1 update and the latest 1.1.3 hotfix.

For almost half a year, you really couldn’t see any visual difference between subsequent builds, because Chris Beatrice and the Tilted Mill folks were tuning and adjusting and adding and subtracting gameplay stuff under the hood. And I got the impression it was a very painstaking and difficult process to get things just right.

I fear that this final push is what a lot of recent and upcoming games in this genre too-often miss. Seems like it’s reasonably easy to get into the red zone, but taking the ball across the goal line is pretty tough.

That’s not only in this genre of builders, it’s something that happens in every genre. And it doesn’t happen nowadays, it also happened in the old games, it’s just that we are biased: we remember the classics like Zeus and Pharaoh because they were the the few ones which as you say, polished slowly their gameplay enough to reach a high quality, which is why they turned into classics, which why we can remember them now. We don’t remember the poor ones. :P

Ok, it may happen a bit more now because everyone has Internet and stores has automatic downloads, unlike the old times.

In any case, I have the impression that even 20 years ago most games weren’t developed like that, few ones could have the luxury of being almost finished and then be polished for half a year.

Who has subsequently gone back to re-evaluate the game with the recent 1.1 update and update their opinion of Nebuchadnezzar.

Kudos to them for taking the time to go back and provide an update.

I enjoy that channel now too… so good find!

Huh, this might slowly become a great game with each subsequent update. The upcoming 1.2 update for Nebuchadnezzar will be adding fire, crime and disease to the game according to today’s Steam announcement. Tried and true gameplay elements common to all the old Impressions’ city-builders, so they should add yet another layer of depth and challenge to Nebuchadnezzar if implemented well.

We are happy to announce a second major update for Nebuchadnezzar, which aims to deepen the city life simulation.

Sounds like their mistake was not playing the early-access game?