Our local Fox and CBS affiliates are demanding that Dish pay them more money or they will refuse to let them continue to show their channels. Dish is saying we told them we’d pay what they pay our competitors and they won’t take it, locals are saying we just want two cents per day, and Dish gets $5 per month from you to show locals which is good for them but unfair to us, etc. Now it looks like our Fox and CBS affiliates will go black tonight at midnight. I cannot believe this pissing match has gone this far, but that’s for another thread.

Anyway - for the shows we can view on the computer, what is the best way to connect my computer to my HD 1080p 54" plasma in order to get the best picture? I have a Boxee but the interface is slow and clumsy, plus some outlets like Hulu have quite a few shows that they won’t allow on anything but a PC (and which are not on Hulu +)

Your Plasma doesn’t have a PC / VGA input? All of mine do.

Not sure how that middle paragraph fits in, but just get a DVI->HDMI cable. $5 and problem solved. 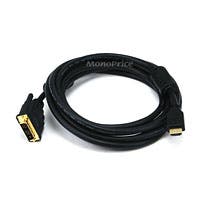 *** !!! WARNING !!! *** Note that this cable is NOT an ordinary HDMI® cable. This is specifically for connecting a device with an HDMI connector to another device equipped with a Single Link DVI-D connector, typically...

I am going to guess that the laptop does not have DVI.

I actually looked and it does indeed have a DVI port next to the VGA port. I didn’t even know what one of those looked like! LOL!

When you plug it in, Windows should recognize the TV automatically and show it as an additional display; just make sure it’s set to 1920x1080 (I believe it’ll default to that), and you’re good.

The only thing you may have to tweak will be the Overscan settings. This is because a lot of 1080p TVs are not truly 1080p - the bezel covers some pixels on the edges of the screen. This doesn’t matter much for most viewing purposes, but is very noticable if using a PC. The problem with Overscan adjustment, however, is that if it uses scaling to make the picture fit the result comes out looking blurry.

If you run into this problem, what you ideally will want will be to not have any Overscan correction, and instead to use a resolution slightly under 1080p. I believe that Nvidia cards specifically support something like a 1708X990 resolution which exists to address this sort of issue.

A lot of the newer HDTV sets are designed to not have this sort of problem, but your plasma might.