My rig (4th gen Intel built in 2014) appears to be bricked (stuck in a power startup loop, see other thread) so it’s time for an overdue replacement. I need to make some quick decisions since I’d like to get the parts this week and build it over the upcoming Labor Day weekend. I have a local Microcenter so I will get everything there if at all possible.

My build strategy is usually to go for stability and efficiency, kind of a solid mid-range rig. Here’s my list so far. Feedback appreciated.

CPU: Intel Core i5-12600K
Cooler: Noctua NH-U12S chromax.black or OG beige
(I’ve always used the Intel stock cooler LOL so this will be a first for me.)
Mobo: ASUS - Z690-PLUS TUF Gaming WiFi DDR4
(Does anyone here have this mobo? I was considering the MSI Tomahawk but I trust ASUS a little more. My previous 2 rigs have been Gigabyte but I’m ready for a change. I’d go ASUS ROG Strix but apparently their huge VRM shrouds make them incompatible with the Noctua coolers, whoopsie!)
GPU: ASUS - NVIDIA GeForce RTX 3070 TUF Gaming V2
(I usually prefer EVGA but realistically I will get whatever Microcenter has in stock for 3060-Ti or 3070.)
RAM: Corsair - Vengeance LPX 32GB (2 x 16GB) DDR4-3200 PC4-25600 CL16
(Something quality without any bling or massive heat spreaders to get in the way.)
PSU: Seasonic USA - FOCUS GX-850, 850W 80+ Gold
Case: Fractal Design - Meshify 2 Compact Black No Window
(I’ve had my eye on this case for a while.)
SSD: Samsung - 970 EVO Plus SSD 1TB M.2 NVMe
(Should I go for the 2TB unit right away? Game installs seem to be getting massive.)
Sound: Mobo sound or Creative Labs Sound BlasterX AE-5 Plus Sound Card?
(I’ve always gotten the current gen Sound Blaster card for my rigs, but I haven’t seen anyone include a sound card in their build in ages. Is current gen mobo sound really that robust, or does everyone just use headphones with USB DACs? I have an adequate 2.1 Logitech speaker setup.)
O/S: I think I will just stick with Win 10 Home until Win 11 matures, though I’ve read that Win 11 is supposed to include some efficiencies for Intel 12th gen CPUs.

Dunno about the specifc MB, but everything else looks fine :)

My opinions!
Skip the sound card and see if you miss it.
850W will be a little bit of overkill for this build. GPU is probably around 200-250W, CPU around 100 say.
2 TB is a nice to have. If you keep a lot of recent games installed, I would do it. I haven’t filled my 1TB, but I have come close once or twice.
You probably know you want 32GB. You could drop to 16 of course.

Do you have a microcenter nearby as they are doing some good discounts on high end of parts right now. Here is a good example: 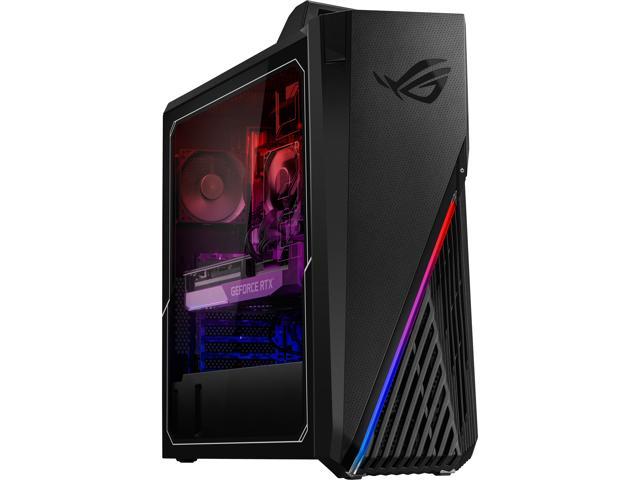 I built a new PC a couple of months ago which is very similar to yours, so a few thoughts:

Mobo: I went with a B660 MSI board in the end, and while I’m happy with it, I didn’t realise it lacked an optical audio output. Similar to you my previous couple of builds have used Gigabyte boards but, at least from my casual research, I don’t think you can go too far wrong with any of these brands (incl Asus) - it’s mainly just checking they have the features you want.

Sound: Agree with @Alistair that the soundcard isn’t a must have. Certainly something that can be added later if you decide you need it.

SSD: I got a 1TB 980 but was considering a 2TB. What swayed me in the end was that 1TB was enough for now (I don’t tend to keep a ton of games installed), and since my mobo had two NVME slots I could always get a second larger drive later (eg a 2TB) to use as a dedicated games drive while the smaller 1TB would be sufficient for the O/S and apps.

O/S: I went with Windows 11 and have had zero issues with it (and I tend to be a bit picky about weird UI stuff, etc).

I try to give myself plenty of headroom since I tend to keep my rigs a long time without any major upgrades. My dead rig has 16 GB RAM and 1 TB SSD, so mentally I am tempted to go beyond that for the new system. I don’t want to worry about closing browser tabs for demanding games, and I was shocked to see some recent games with 150 GB footprints. Yikes.

I do have a local MC. I’d be tempted to compromise with a prebuilt for the time savings, but I pretty firmly want good air cooling and no glass case panel – which is impossible to find in a prebuilt.

How’s your system working out so far. Any lessons learned?

One annoyance with the midrange motherboards like the ASUS TUF that I listed is that they tend to skimp on rear USB-A ports. That ASUS TUF only has 6 USB-A ports in back (plus 2 USB-C), which is a little tight for my liking.

I’m still pondering Win 11. I’d rather let it mature and avoid the growing pains, but it would be nice not have to do major version upgrade later.

DDR3600 is common for ryzen builds. Not sure for Intel.

I don’t know why you would need a sound card these days unless you need a specific output you just can’t get on a mobo.

My understanding is that 3200 is the default for Intel 12th gen RAM support, so I’m admittedly going conservative there. I have heard that 3600 is the sweet spot for Ryzen.

From my recent research, the ASUS TUF line of gear does seem to align with what I look for when shopping PC stuff. Solid reliable products without too much flash or extras.

Very happy with the upgrade. The i5-12600K is a decent step up from my i7-7700K, and the Noctua NH-U12S seems to do a good job of cooling it while also being fairly quiet (PC sits under my desk).

I also went with 32GB of RAM as I often have multiple IDEs and virtual machines running. Perhaps I could have gotten away with 16GB but I don’t regret going larger.

The case you’ve selected looks good. I had to go with what they had in stock, so ended up with a Phanteks P400A. Since it’s mostly out of sight I didn’t really care about the aesthetics, but I’ll admit it has grown on me over time.

Yeah, I’d heard similar things about Win 11, but figured it would just be easier to go with the latest. Install was an absolute breeze and I can’t think of anything that would make me wish I’d gone with Win 10.

My understanding is that 3200 is the default for Intel 12th gen RAM support, so I’m admittedly going conservative there. I have heard that 3600 is the sweet spot for Ryzen.

I went with 3600, so I can at least confirm it works. Whether it makes any meaningful difference I couldn’t say…

Is Win 11 close enough to Win 10 that typical software and drivers are essentially completely compatible between them? In other words, do devices even have Win 11 specific drivers or does everything now just have shared Win 10/11 driver sets?

Good question. I don’t recall having to get anything Win 11 specific ie everything just worked out of the box.

Win 11 works fine, is no issue w/ drivers, and you want it if you’re going 12th gen Intel.

GPU prices will continue to fall. Maybe keep your existing GPU until the 3080 (already below original MSRP on the street) hits a price you find reasonable?

I’d skip the sound card for now. You can always add one later. I use the external Soundblaster X4 DAC/AMP/Sound card which I dig, and makes it easy to toggle between speakers and my headset.

I’d personally opt for DDR5 since prices are far more reasonable than they used to be, but there’s no doubt that DDR4 is a heckuva bargain these days.

I have this cooler. Works great and was easy to install. My PC is very quiet.

I have the Meshify C (with window) and I really like it except the PSU mount is down at the bottom of the case and some of the power cables have to stretch a little to reach their sockets. Nothing that puts any strain on them, but makes clean routing harder. Otherwise the case is very clean, quiet and elegant. I like the 2.5" SSD mounts on the back of the motherboard plate. Plenty of room for everything. Nice cable routing features.

SSD: Samsung - 970 EVO Plus SSD 1TB M.2 NVMe
(Should I go for the 2TB unit right away? Game installs seem to be getting massive.)

Yes. I installed a 1TB SATA SSD when I built my PC two years ago, and just a couple of months ago put in a 2TB NVMe drive. Best upgrade so far.

Starting off with 2 TB does make sense the more I think about it.

Consensus seems to be to stick with onboard sound for now, which makes for a cleaner build anyway

I’m still torn on Win 10 or 11. I don’t like being an early adopter but starting clean with Win 11 would save me from a messier upgrade install later. Looking around, the differences for gaming for Intel 12th gen seem minimal between them. Hmm.

The nice thing about a sound card is that they pretty much last forever now. I’ve been rocking my Soundblaster Z for 10 years. It’s carried over three successive builds and driver support has been solid. Even the newer Soundblasters are still using the same SoundCore processor.

Yeah, definitely 2TB on the SSD. I have a TB boot drive and ended up adding a second m.2 SSD. (But I do play MS Flight Sim, which is enormous…) But headroom is good. Make sure your motherboard has 2 or 3 m.2 slots so you don’t have to swap out whatever you start with, but can just add.

Check the motherboard to ensure it has the proper connectors to fully support all the USB on your case. One reason I went with the Fractal Define 7 is that it has 5 USBs right up front. (1 Type C, 2 3.0 Type A, and 2 2.0 Type A).

I have a collection of excellent sound cards, but don’t use them anymore. Current motherboard sound is super solid.

Definitely go for Win 11. There’s some stuff to do with the weird core split in the 12th gen Intel chips that Win 11 handles better. No reason not to… The only annoyance is the crippled taskbar (if you were a power taskbar user), which can be solved with a variety of free and cheap utilities.

I had a Sound Blaster Z in my previous system. It was very solid. I tried onboard sound or alternative sound cards (anyone remember Hercules lol) a few times in older builds, but none had the fullness and power of the Sound Blaster.

I’m leaning toward Win 11 now so I don’t have to do the upgrade later. I don’t think the taskbar stuff will bother me. Does Win 11 officially have the tabbed File Explorer yet? That would be a big plus for me. I’m mainly concerned about compatibility of software and drivers. I’m glad they got all those game DRM incompatibility issues sorted out a while back.