So, after years of buying gamer laptops, I am ready to once again move into the big leagues!
Since its been so long, I dont really know what to look for anymore, so I figured it make use of the incredible braintrust that exists here on Qt3, if you will allow it!

This is what I am looking at currently.

Is 16 GB ram still good enough? And is the RTX 2070 8 GB card fine? As for the SSD, I really dont know enough about those either, since I seem to recall SSD isnt just SSD these days.

Any input would be appreciated, thanks!
Oh, and as an aside - The game that finally broke me, was Skyrim…yeah, Skyrim fully modded cant run with more than 20-30 FPS on my Gaming laptop that has a Nvidia 2070 card in it…
I tried to use PCMARK10 score system, and it only got 4674 in score, which is…kinda eye opening I think, seeing how most standard gaming pcs are way higher than that.

Oh - question 2 - How well does steams game streaming work? As in - Can I use the above pc to run heavy games, and stream them to my laptop without issues?

And this is the other one I am looking at, but its way more expensive!

You’re paying a premium for an overclockable processor, a high-end motherboard and RAM that will require overclocking - are you planning on overclocking?

The SSD is too small, and unless you plan on storing movies/photos, you don’t need a mechanical HDD.

The H45 is louder than a fan cooler that’ll cool just as well unless you’re overclocking the balls off of it. I dunno about you, but I don’t want to hear a PC when gaming.

The PSU is really cheap especially in a system that expensive.

Would you not look at some of the german PC manufacturers and see what they’re offering?

Aye, noise is an issue, and I did read the H45 was kinda noisy!
As for overclocking - its not something I planned on, but again - I have no idea!

See, thats what I mean - I dont know enough about this stuff to see anything untoward regarding the PSU - I dont even know why it matters.

And sure - I just know I get excellent service from this particular company which is why I always start out there.
They have a build-it-yourself section that I find incredibly daunting but is probably the best way to get what you want.

Edit: This is what tried building, but again, I know next to nothing about many of these choices.

So we are looking at a new laptop for my wife, and broadly speaking the Ryzen 7 is straight superior to even the latest Intel chips it seems.

I would probably lean towards those chips, or even a Ryzen 9 if you can.

Oh - interesting. The Ryzen 9 is a bit more expensive…but still

I think you’d want an X570 board with a Ryzen 9. B450 is previous gen. It’ll work, but fewer upgrade options in the future.

Awesome -thanks! See, this is the kind of stuff I dont know anything about. So, an updated list would be something like this

750W is more than you need for that setup, I’d think. PC manufacturers are pretty bad about trying to include too much overhead on that sort of thing. You’d likely be fine with 550W. There are a bunch of calculators around on the internet so you can work it out for yourself (though always leave some overhead).

Consider whether you want a hard disc at all nowadays. SSDs are so much faster and are fine for reliability. I would try to put games and the system on SSD. Bulk data like photos and music are fine on HDD.
Mentioning which, try to have separate logical partitions for your system and everything else. Makes it so much easier to recover from a system failure.

I wouldn’t get a 3900x unless you plan on streaming and gaming at the same time, and even then an 3700x is almost certainly good enough. A 3900x may future proof you or be useful in other applications – but it’s not going to help Skyrim or any game out right now. Maybe PS5 game ports will benefit from it, years down the road, if the magical PS5 IO chip really does need a couple extra cores to match. But you could step down to a 3700X, or even a 3600X for a real value build and probably wouldn’t notice. I really mean it, you would probably have trouble even telling the difference from a 3600 and a 3900 in any game out right now. There’s a case to be made that a 3700x makes sense so you can match next gen 8 core consoles. 3900x is a great chip if you can use it, but probably no detectable difference in games for years.

D15 and D15S are the best of the best air coolers, probably overkill, but if you value quiet are totally justifiable as they run will run quiet for their performance.

If you’re buying a prebuilt there’s almost no chance you will need to upgrade the CPU in the future so the cheaper B450 is the way to go. Except that ASUS TUF X570 option is a very solid board and their B450 options are all kinda meh so I could talk myself into it probably. Certainly if you do splurge on the 3900x then yeah, get that nicer ASUS TUF X570. If you go with a value 3600X CPU drop down to the ASUS PRIME B450M-K instead.

16 or 32 RAM your choice. Easy to upgrade later as long as you leave 2 slots free.

They don’t really offer any good value fast M.2 PCIE SSDs, that Intel one is arguably not better than the Samsung SATA 860 Evo. And the high end Samsung 970 Evo is great but so expensive. This is a really good area to do your own upgrades later. Stick with the 860 Evo unless you are feeling like really going crazy, then sure, 970 Evo Plus is one of the fastest drives out right now. But they know it and charge a premium. Edit: Changed my mind. Go with the Intel Solid-State Drive 660p Series - 1TB over the 1TB Samsung 860 Evo. The main downside seems to be when the drive gets full which is easily avoided by leaving free space. And it’s theoretically not as long lasting but they both will last plenty long. I wouldn’t use a spinning disk at all if you can avoid it.

If noise is a priority then the case is too, that’s the biggest factor. I’m going to sleep I’ll let someone else check which are of those are quiet. There are some good options in that list.

They don’t really offer any good value fast M.2 PCIE SSDs, that Intel one is arguably not better than the Samsung SATA 860 Evo. And the high end Samsung 970 Evo is great but so expensive. This is a really good area to do your own upgrades later. Stick with the 860 Evo unless you are feeling like really going crazy, then sure, 970 Evo Plus is one of the fastest drives out right now.

I was looking into upgrading/expanding my old SSD a couple days ago and according to good ol Wirecutter there are some decent value PCIe drives out now.

Personally I wouldn’t get an old SATA drive like the 860 Evo if I were buying today since these PCIe drives don’t cost that much more in the scheme of things*, and they are a hell of a lot faster. 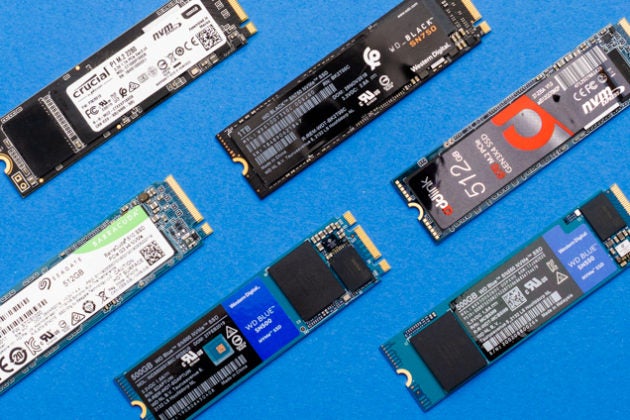 Almost every SSD you can buy today is great, but our top pick has the best combination of price, performance, and capacity of any solid-state drive.

The site Razgon is using didn’t offer anything in between the Intel and the high-end Samsung. There are indeed plenty of good drives in general, a good thing to add later. I do think Intel 660 isn’t that bad and I think it’s the one to get if you have to buy from that store and you don’t want to get the Super deluxe Samsung.

If you’re going to go all in on SSD, you’ll need lots of space, unless you’re planning on only playing small indie games.

IMO, not all games need an SSD, I have 3 drives, 2 are SSD (OS / games that require it), one is mechanical for all the stuff that doesn’t require an SSD.

Really awesome feedback, guys - Much appriciated! I’ve updated my setup a bit, based on what you people are saying, since it makes excellent sense.

I am still somewhat undecided on processor and cabinet. Processor seems futureproff? But Cabinet is just a guess - I tried googling some of them, but most reviews seemed to indicate many of them were old?

The site Razgon is using didn’t offer anything in between the Intel and the high-end Samsung.

Ah I see, even the ‘configuration’ options there don’t have anything outside of variations on those 3 models. Ah well that’s the price for not buying bits individually I guess! :)

Computer cases don’t change that much year to year, so it’s pretty normal that some models may have been be out for awhile.

I just did a build with this mid ATX case:
https://pcpartpicker.com/product/Y6Crxr/fractal-design-meshify-c-atx-mid-tower-case-fd-ca-mesh-c-bko-tg

I like it. Cables are all behind the motherboard mounting plate so there is tons of free space around CPU cooler (Noctua NH-U12S) and GPU (RTX 2070 Super) for air flow. Even at full gaming load I never hear the fans at all.

The power supply is mounted at the bottom of the case, which is slightly unusual, but all of the cables reach where they’re supposed to.

Looks nice, Matt! Interestingly, I just choose a Fractal Design cabinet myself - They are supposed to be really low noise as well.

All looks good IMO. I have that case too I think. If you want to buy right now those look like fine choices :)

Cables are all behind the motherboard mounting plate so there is tons of free space around CPU cooler (Noctua NH-U12S) and GPU (RTX 2070 Super) for air flow.

I have a photo 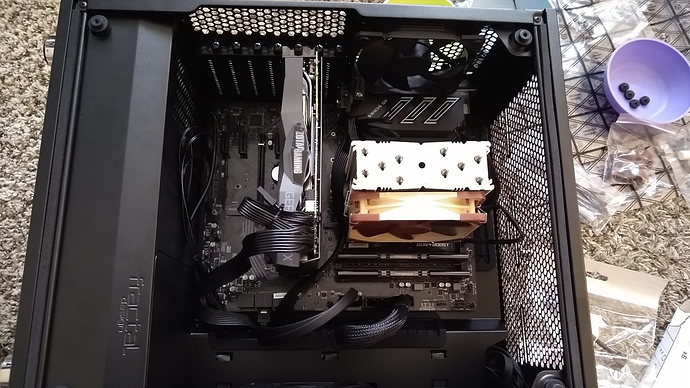 I don’t know about Denmark, but in the US, where everyone has their Trumpbux, there’s a big run on computer supplies. Motherboards, power supplies, and cases are constrained. I wanted that Fractal case, but it was history. As were my second and third choices.