I definitely notice some stuttering on the Switch. Kind of pathetic.

I played a couple levels with my kids. Co-op is fun. So far it hasn’t really triggered my nostalgia because it’s kind of doing its own thing. The Mike Patton song is still pretty badass though.

Can you play couch co-op with a single joycon for each player?

Yes, we have one pro controller and two sides of a joycon.

I played the first level. I know I’ve never liked a game of this type before, but it’s on Game Pass, so why not?

And I have to say, I really enjoyed it. I can’t believe it.

I’m not much of a brawler fan, but this is really, really well done. Highly recommend giving it a go on Game Pass.

Anyone have any feedback on how doable this is solo? I always like these kinds of games but find they get frustratingly hard without other players - I know they are kind of designed around co-op play, but maybe there are difficulty levels or something to offset? It looks fun as hell.

It was a breeze to play solo through the first two levels, but that’s probably not saying much. I was on the medium difficulty. It can also be turned down if you want. Not sure if it can be turned down after starting, though.

I played through story mode on what I think was the easiest level and it was a breeze. I think in a fluke I once lost two lives on one level but it was rare I even lost one. And in story mode, you can just retry the level if you completely fail.

Haven’t tried arcade, that’s the mode where you’re playing through it all in one shot and if you run out of lives it’s game over, but it’s probably almost as easy given how few lives I lost. I’m not entirely sure how the very minor “upgrade” system works in arcade. In story mode, on a per character basis you gradually unlock a couple extra HP, the ability to bank up to 3 special attacks, and some special attack variations. I don’t know if those upgrades are just present from the start in arcade, not present at all, or are still gradually unlocked in the play through.

This is a genre where my habit/compulsion to play all games on hard difficulty really bites me in the ass. I invariably try for a couple days, die at the end of the first stage, then give up and move on to some other game. I’m a dummy.

Haven’t tried arcade, that’s the mode where you’re playing through it all in one shot and if you run out of lives it’s game over,

That’s interesting, because to me “arcade mode” means you get as many chances to continue as your allowance could bear – “pay 2 win” back when a game cost two bits.

That would be an interesting use of microtransactions.

I bet people would hate it.

That would be awful. Of course people would hate it.

Yeah the trend seems to be that story mode is continues/stage select mode to get all the content and that arcade mode is “old school” 1 credit clear challenge mode with no continues. SoR4 used the same nomenclature.

For whatever reason, I’ve never felt the urge to play a beat 'em up on really hard difficulty. I guess I don’t get the mechanics enough to understand why that would be fun for people like it is for a good 3D action game.

I guess I don’t get the mechanics enough to understand why that would be fun for people like it is for a good 3D action game.

Watching narrated speedruns (from like GDQ or similar marathons) is probably the best way to get a glimpse of it, but it’s definitely a different skill set from 3d action games.

Yeah I watched a 1CC run real quick and saw a lot of that. It’s interesting that I’d much rather apply the same skills to a shoot 'em up.

Yeah, I think the game is designed to learn it by progressing through the difficulty levels. Most games/genres teach you the basics one-by-one in the early levels as you play. But as far as I’ve seen, the brawlers drop you in with all your skills and you just go. Button mashing might get you through Easy and maybe even Normal, but on Hard, you better pay attention to that load screen with 20+ combat tutorials!

Best I’ve done is taking off 1/3 of the final boss’s health meter on my last life at the end of the first stage. But I’ve only tried three times so far.

The boss fights kind of suck in this game. Lots of running away and knockdown attacks.

But the true torture is trying to kill a flying boss with 2 other people that aren’t that good with the controls so they’re basically just there to increase the boss health.

As I mentioned I played through story on easy and it was no sweat at all. I went back and tried to change difficulty and it doesn’t look like that’s possible without starting a “new” story mode—you can’t have more than one and it resets your progress. That’s a little annoying that now I’ll have to re-level Raphael if I want to change the story mode difficulty.

But I did play the first couple levels on medium difficulty in arcade and that felt “right”, not too hard, not too easy. 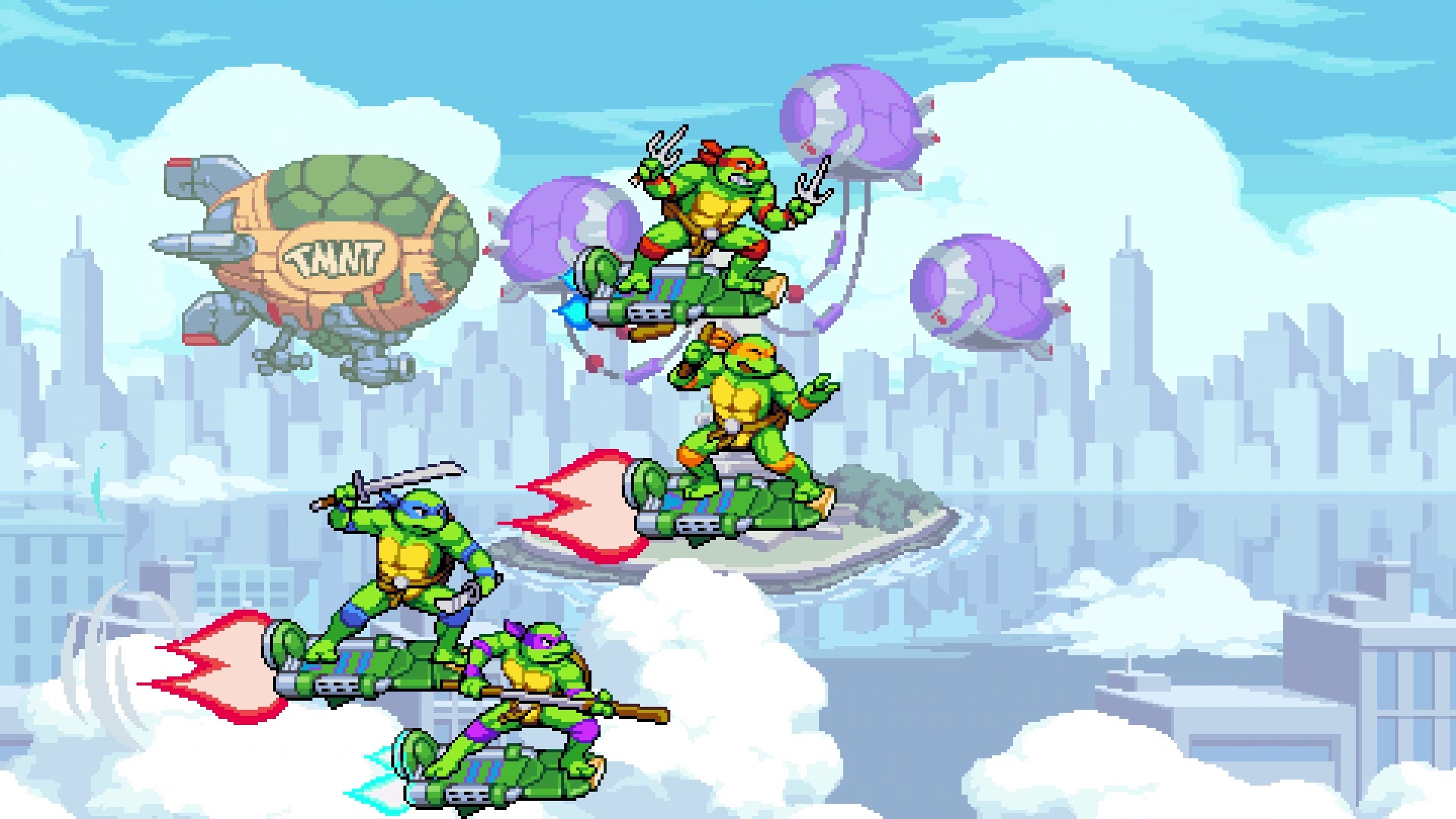 I figure being on Game Pass probably helped spread good word of mouth.