All of my devices are plugged directly into the receiver, so setting things up is pretty easy. My TV is connected via the Audio Return Channel-support port 4 in case I ever watch anything on the TV itself, but I rarely do.

What happens, though, if I want to plug in a new device to a different HDMI port on the TV? For example, I just got a Switch, and since it needs to sit out in the open instead of where the other devices are, I want to plug it into the TV.

Here’s a sketch of the setup. Basically trying to figure out of there’s a way to get audio from the Switch to go out through the receiver. 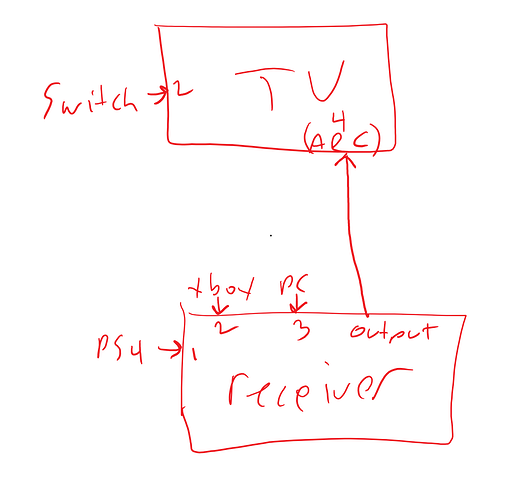 Are you a qualified engineer? :)

I also can’t tell from the basic manuals whether the TV supports multiple audio sources out over its ARC, which is the fundamental question. Maybe call their toll free # ?

It’s certainly how it’s intended to work. I currently have all my devices going into my TV and audio going from the TV to a Blu-Ray/Amp system on the ARC port. Works fine so long as the amp is set to the TV input. No idea if your particular model will also work, though.

I guess the hang up is on my receiver. As noted in my sketch I currently use the receiver Output to go to the TV. But I guess the output on the receiver can’t receive audio via ARC?

When I went into my receivers settings, I could choose the HDMI port to use for ARC, but I couldn’t actually select the HDMI output port.

I think it seems like I need to reconfigure the entire thing if I want this to work, I just don’t know how.

Mind sharing a quick diagram showing how you have it set up?

This won’t help in your situation, but to make life easier for the family (and myself), I ditched our receiver entirely to reduce complexity.

I got a soundbar, which was bundled w/ a couple of satelite speakers and a subwoofer, and it’s connected to the TV’s ARC HDMI port. Now I just connect stuff to the TV via other HDMI ports, and everything automatically comes out the soundbar and associated speakers without any other fiddling. The TV and Soundbar volumes are automatically synced.

I got a Vizio for about $250 from somewhere online. I figured, we’re talking about watching cable TV, streaming video and music, I use Google Play Music which works with the casting built in to both the TV and the soundbar indpendently (so the screen can be off if we want to cast music). So far, so good. It’s not an audiophile solution, but it does sound pretty nice to my barbarian ears.

I actually have the same model of receiver I believe. I know it’s a Yamaha upper mid tier receiver.

From my experience if you have the receiver set to TV, we have ours through optical, it has not had issues. I had the Wii go into the Tv through composite, and the audio kicked out to the receiver and sound system just fine.

I’ve got the RX-V477, too. And I don’t remember there being a configurable ARC HDMI port. I thought there was a specific port, identified on the back, that supports ARC (my brain is saying the leftmost one, if you’re facing the back). I’m pretty sure it’s HDMI 1, since that’s what I have my Vizio TV hooked up to. It’s the only cable running between receiver and TV that I have. Unfortunately, I’ve never tried your scenario of a device plugged directly into the TV to see if the ARC sends the audio back. I’ve only ever used the built in smart apps and the tuner to see if those work (and they do!).

Let us know how it works out. Kinda curious, though I don’t think this will ever affect me. I have all my components (Apple TV, PS4, HTPC) all hooked up in a media cabinet in a storage space behind the wall, I just drilled a small hole through the wall and feed everything through there. I wonder why the Switch needs to be visible? Or is it you just want it handy so you can yank it out to go mobile whenever you want?

Seems like my problem is that I’m trying to do both simultaneously?

Implementation of ARC seems to be not very standard, so some TVs only pass on their OTA/Cable audio, some only pass one or a few HDMI inputs, hard to know what it does.

Can you just run RCA cables from the TV audio out to a spare input on the receiver? Not digital but meh, we’re old :).

I wish there was a resource somewhere which provided simple diagrams of how to wire all this shit up and configure TVs and receivers to play nicely together.

For now, I just bought a 10ft HDMI cable so that the Switch can reach my receiver instead of needing to plug it into the TV it sits next to :-P

A smart solution, albeit probably not the most elegant. But who cares if it works!

Yeah, I just plug everything into my TV and then optical out to audio (in my case a cheapo Vizio soundbar that gets the job done).

I just found a decent article talking about this whole process. Basically, you’re looking for 5.1 surround sound passthrough via HDMI ARC on your TV, ideally both Dolby Digital and DTS, though the latter is rare. Your TV isn’t on their confirmed list, but it might be. I didn’t dive any deeper. It does provide instructions for enabling passthrough on Sony TVs.

Thanks for that article. It does seem to confirm that I’d need to do one or the other - hook all my devices up to the TV and use ARC pass-through, or hook everything up to the receiver.

How many HDMI ports to modern tv’s have? Mine has just 2 so I was surprised to see “hook all devices up to tv” was even a thing.

Mine’s got 4. It’s definitely one of the areas where there’s been a lot of improvement. I wouldn’t have needed a receiver if I weren’t such a big fan of my 5.1 speaker setup! Occasionally I’m tempted by the whole simplicity of a sound bar, but then I remember how much the simulated surrounds still kind of suck.