I played Runner Duck’s interesting Bomber Crew, and since it’s not (and isn’t meant to be) a historical game, and I’m a historical gamer, I wondered what I could do to scratch the itch the game had given me. I own both of Lee Brimmicombe-Wood’s WWII Allied bomber games, Bomber Command and Nightfighter, and thought Nightfighter might be a good forum game since I had played it not too long ago over VASSAL and it was very smooth. It’s also more of an umpired game rather than a straight “versus” game. I asked on the Grognard thread if anyone would want to participate and we got @Spock and @Tom_Mc and my friend who GM-ed the VASSAL game was also interested, so I chose Scenario 5, which gives the defender 3 planes, and thought each person could pilot one of them while I played the umpire. This should mean a minimal commitment for each player, while still keeping the game interesting for spectators. You don’t have to know the rules or even much about air combat to watch this game, so I hope this is entertaining for people.

I’ll post the first turn as soon as our players confirm by posting in this thread.

Background. August 1943. After Air Marshal Arthur Harris took the reins of Bomber Command in 1942, the RAF began to concentrate their bombers into denser formations. These “streams” of bombers could transit the target area in less than an hour, instead of over several hours.

The Himmelbett system could only engage a few targets at a time in each zone and was overwhelmed by the bomber stream. Following “Operation Gomorrah,” the devastating attack on Hamburg in July 1943, Generalmajor Kammhuber was removed and replaced by Generalmajor ‘Beppo’ Schmid, who cast around for new strategies to use against the RAF.

To cope with the concentrated bombers streams the German nightfighter force developed a tactic called Wilde Sau ("Wild Boar”). This concentrated single-engine nightfighters over the target, where they could hunt down bombers identified by searchlights. A special Geschwader, JG300, was formed to implement Wilde Sau.

This ad hoc tactic met with some initial successes, but soon ran into problems. Coordination with flak was almost non-existent, causing many Wild Boar fighters to be shot down. The difficulties of navigating ill-equipped day fighters at night resulted in losses when aircraft ran out of fuel, forcing pilots to bail out. Finally, the tactic only permitted the defenders to see the raiders when they were over the target. Many bombers were caught only after they had dropped their bombs.

Background. 27/28 July 1943. The first night’s raids on Hamburg saw the Luftwaffe’s entire air defense system fall to pieces as a result of jamming from a new system called “Window.” Two days later, the recently formed JG300 was thrown into the fight and performed creditably on a night when Window was continuing to cause chaos.

Difficulty Level: Normal.
Game Length. 15 game turns.
Sequence of Play. Ignore the Radar Search Phase and AI Search Phase.
Attacker Forces. (British) Elements of No. 5 Group, Royal Air Force. The attacker has 45 Lancaster Mk III bombers.
Attacker Entry. Three bombers enter on each game turn.
Defender Forces. (German) Elements of I/JG300, Luftwaffe. The defender has two Me109G-6s and one Fw190A-5. He may designate one aircraft before play as having an experte pilot.
Defender Setup. The defender sets up in any hexes with any facing.
Search Radar. None.
Searchlights. All searchlight zones (A to R) are active. Due to jamming, the searchlights are NOT radar-directed.
Flak. Yes.
Moon. No moon. HISTORICAL NOTE: There was a small amount of moon this night, but we treat this as no moon.
Visibility. Moderate 0/3.
Cloud. None.
Victory Conditions. The player wins if he shoots down three bombers. (“The player” in this case refers to the defending side. So our three players need to shoot down a total of three bombers, not three bombers each.)

Please post your setup hex and facing. For purposes of facing in this game, with the map rotated as it is, we will use the following designations. 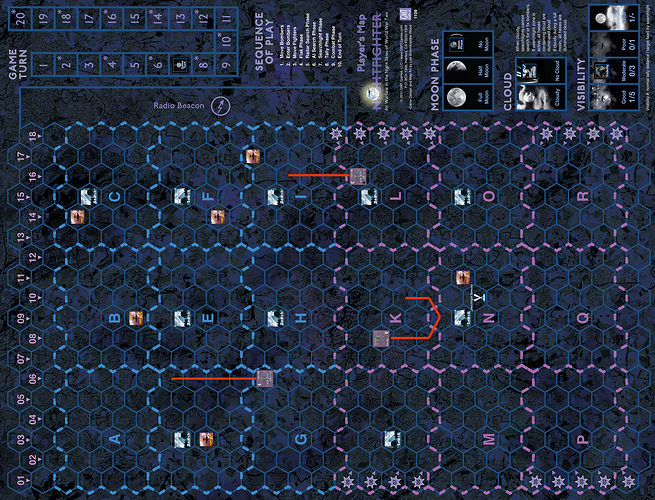 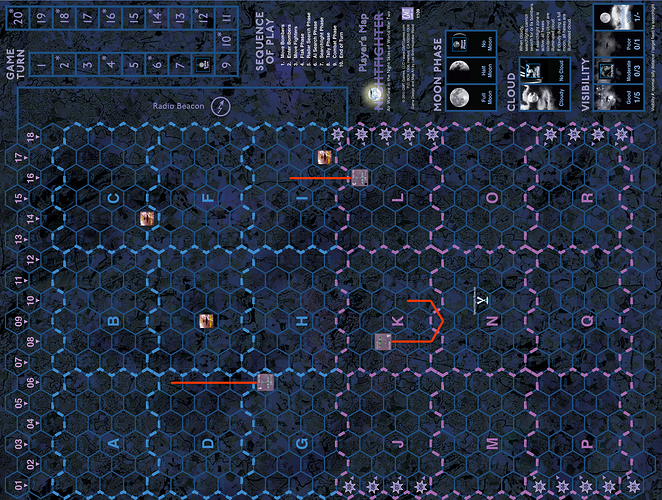 GAME TURN 1
Move Bombers Phase: No bombers on map yet

Enter Bombers Phase: Three bombers enter as per scenario rules. These can move 1, 2, or 3 hexes on the first turn. Move completed on umpire’s map.

Flak Phase:
No nightfighter is in a searchlight zone. Therefore there is no flak roll.

Searchlight Phase:
There are no bombers in any searchlight zone.

Tally Phase:
No fighters have a tally as of yet so there are no tallies to maintain. Visibility is Moderate (2 dice). No moon modifier.
Tally Roll is 1,1
No tallies reported.

Combat Phase:
There are no Tallies so no combat is possible.

End of Turn
No searchlight markers to remove.
It is now Game Turn 2.

Enter Bombers Phase: Three bombers enter as per scenario rules. These can move 1, 2, or 3 hexes on the first turn. Move completed on umpire’s map.

I’m here and ready to confirm.

I’m not a boardgamer so I’m looking forward to observing this. Ever since I heard that fighter pilot on Three Moves Ahead say he prefers air combat boardgames to flight sims, I’ve been wanting to see what he was talking about.

Hey all! I’m @Brooski’s VASSAL opponent from a few years ago. He and I PBEM’d a few games to show him the ropes. You really need to play both sides to learn all you can about the kit from this era, and how they interplay, so I’m glad that Bruce is moderating this one! I’m new to Q23, so please forgive any faux pas on my part!

Welcome, @AleccMG! And thanks for confirming @Tom_Mc. As soon as @Spock posts, we can start.

Super! As soon as I get home from work tonight (evening Pacific Time) I’ll post the particulars.

Sounds good! I know you’ll be posting the map on the forum, but I’m gonna set up my paper version anyway, just for fun. :)

Sweet thread, bro, but why don’t you link BGG, like a normal person? :P 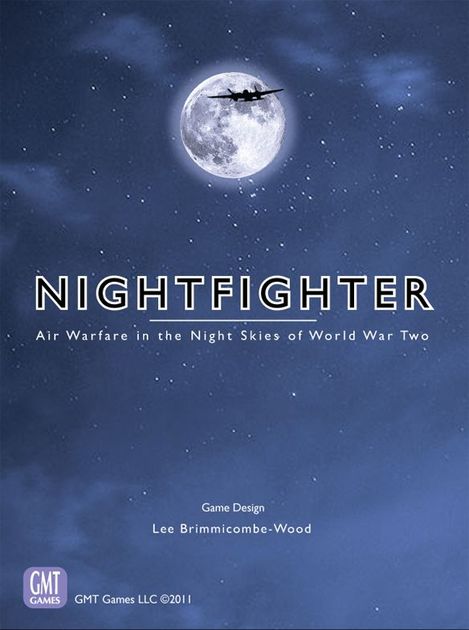 from GMT website: Nightfighter is a board game of air warfare in the night skies of WWII. Using a blind play system, an umpire controls the attacking forces while the defending player must find, fix, and destroy the incoming bombers. Nightfighter...

So many more pretty pictures! 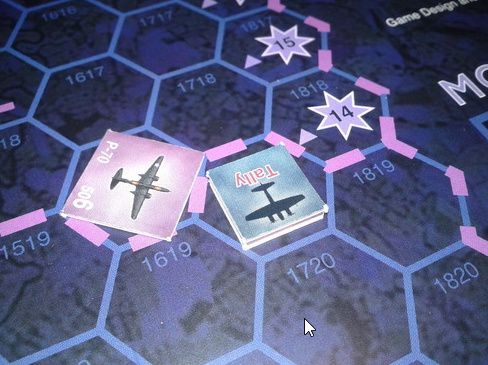 I’m a big fan of EW. How about Scenario 5B with a little Window thrown in (searchlights not radar aided, since they were jammed). If any of my fellow LW players are first-timer’s, I’d recommend assigning the ace to one of them! Chaff, originally called Window by the British and Düppel by the Second World War era German Luftwaffe (from the Berlin suburb where it was first developed), is a radar countermeasure in which aircraft or other targets spread a cloud of small, thin pieces of aluminium, metallized glass fibre or plastic, which either appears as a cluster of primary targets on radar screens or swamps the screen with multiple returns. Modern armed forces use chaff (in naval applications, for instance, using short-ra...

I’m a first-timer, but I’m not sure you want to waste “Experte” status on me. I vote for Tom Mc!

but I’m not sure you want to waste “Experte” status on me.

This game is pretty brutally punishing to the average-Joe pilots. I’m pretty sure a LW NJ pilot would have a better chance of crashing on landing than finding an enemy bombe on given sortie, let alone killing him. As with much of air combat, a preponderance of the kills fell on a minority of the aviators.

In other words, as a game vet I’m happy to take the plane that’s not going to get a lot of action!

@Spock, @Tom_Mc, and @AleccMG, you are ready to go. Please post your starting hex and facing, and I will start the bomber stream. It will be going from left to right, which is top to bottom on the physical map.

I’m not a boardgamer so I’m looking forward to observing this. Ever since I heard that fighter pilot on Three Moves Ahead say he prefers air combat boardgames to flight sims, I’ve been wanting to see what he was talking about.

Just to be clear, Lee Brimmicombe-Wood’s games are about the air ops themselves, not about the niceties of flight modeling and dogfights. So the differences between an Me109 and an Fw190, for example, are minimal in this game.