One downside is that they don’t have HD Rumble and a handful of other features you probably don’t care about (NFC, IR, gyro).

Haha, i totally forget that joycons have rumble. I disabled it the first time I played the switch on public transport, and haven’t turned it on since.

One downside is that they don’t have HD Rumble and a handful of other features you probably don’t care about (NFC, IR, gyro).

Also, one feature that I do care about: they don’t support the system-level button remapping. For a while I changed my pro controller to swap X<>Y and A<>B to match the Xbox button layout and be a bit easier on my muscle memory. But I had to put it back because I couldn’t do the same change on the Hori pad.

It’s a testament to how much more comfortable the Hori pad is that I’m still using it rather than going back to joy-cons in handheld mode so I could make the buttons work the same.

They really do make a terrible sound when they rumble.

If you’re willing to buy the physical edition on the last day of Super Mario 3D All Stars’ availability. It’s on sale for $50.

I personally can’t abide looking for those tiny little theoretical cartridges to put into my theoretical Switch though.

I logged on to Super Mario 35 last night, just to double check that the service is really shut down. But the game launches fine! You get the list of weekly goals! All the buttons still work! You can start the game!..and then it says, “This service has been disconnected.” Boooooooo.

But hey, maybe the practice mode still works! It’s a solo game with no online component! You launch it and…it’s also shut down. Boooo again. Why deactivate something that’s for local play only??

I’m really excited to play this for 45 days until it is pulled from the store too*.

Pac Man CE was tight. If it’s anything like that, I’m into it.

It’s good, but much like Tetris 99, unless you are a Pac Genius, do not expect to win.

Thus far, this seems way easier than Tetris 99, maybe just because it’s brand new, or maybe the baseline skill level for PacMan is lower than it is for Tetris. Unless I screw up catastrophically, getting top 20 or so seems pretty consistent.

Somewhere in the distance, Billy Mitchell cries out, as though wounded. A debt has been accrued, a vengeance, earned.

I always die a mysterious death around top 30. Like something that wasn’t deadly before suddenly is? Who needs manuals

It’s very badly explained, I have no idea what the different modes on the left side do (the standard/strong/train ones. The right side controls targeting, as in the other games). As far as I can tell there’s nowhere on the game that explains this.

I don’t think anything kills you without warning, although after a certain point, red pac-mans start appearing that kill you on contact. It isn’t super clear the first couple times what’s happening there, because the enemy pac-mans up to that point just slowed you down.

Ah that’s what happened probably. I re member seeing a red dot appearing next to me each time and then drop dead. Probably one of those red Pacman in the process of spawning.
Pretty unfair :-/

It isn’t entirely clear to me whether power pellets kill the red pac-mans. I think they might at lower ranks, and then stop doing so at higher ranks, but I might be confusing it with the fruit stage clears.

So in the civilized gaming world, they can often use wireless headphones to hear game audio and do voice chat at the same time. Just sitting on the couch, with the game on a nice TV. But not in the Nintendo realm. The Switch doesn’t output bluetooth audio even, much less support voice chat in any games not named Fortnite.

Discord solves part of this for Switch users, some 3rd party bluetooth transmitters solve another part, but there’s no solution that gives you both audio sources and supports your voice input on a wireless headset.

Until now maybe? Am trying out the Homespot Pro. It’s a bluetooth transmitter that – crucially – can mix a couple audio sources.

I also ordered Avantree Aria Me ($150) headphones. For the Homespot Pro, your headphones have to support the aptX LL codec to keep the action and audio in sync.

My plan was not flawless. The Homespot Pro description says the headphone mic support “is still in beta, doesn’t work with all headphones (no details on this), and degrades audio quality.” Ok then.

I was also skeptical because I wasn’t seeing any reddit threads or articles about this combo working. I mean, it’s kinda obscure, but there is a small cottage industry in bluetooth audio transmitters for the switch and a decent amount of chatter about this issue/problem. It seems like I should have seen an article or three if this worked.

Got both boxes today. The Aria Me box and extras were especially nice. The Homespot Pro was fine and the instruction booklet was clear. Except… no mention at all for enabling the mic on your wireless headphones. It’s not one of the scenarios in the booklet.

I go back to their site online, and after the beta disclaimer thing, it tells me to hold a button in as I plug the Homespot. Everything hooks up ok, except these beta instructions tell me to push a button and an indicator will blink to show my headphone mic is working. No blinking. Ah well. I turn the Homepro built in mic off.

Game audio sounds good. I make a couple calls. Sure enough, I get audio from both the call and the game. My voice sound fine to the listener. Haven’t tried in on Discord yet, but I’m sure it will be the same.

I’ll have to play online for a few hours to put this through the paces. Using a low latency codec, and then supporting voice on top, maybe it show an ugly side with more time.

But right now, I’m chuffed. I can play online, chatting on Discord or a phone call, and hear the talk and game audio together in my wireless headphones. One of the Nintendo pain points has gone away.

It’s the wireless pendant to the usb mixer workaround discussed earlier. I prefer cables to having to deal with the randomness of Bluetooth personally.

It’s good, but much like Tetris 99, unless you are a Pac Genius, do not expect to win.

I got second place! Still trying for first. Has anyone figured out what the different modes (Speed, Strength, Train) actually do??? 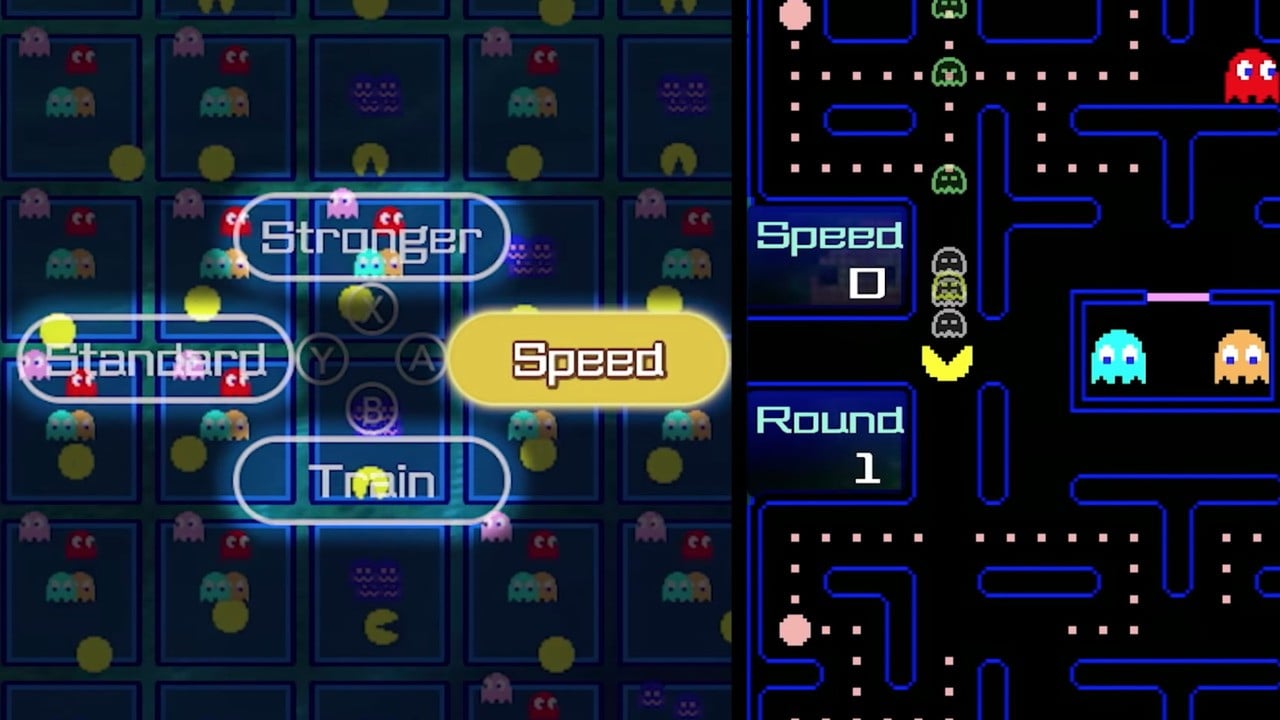 Power to the Pac-Man