Also that battery life is just without equal. Incredible to be able to game for serious hours over a week or two before having to plug again that controller.

Joy cons? Or the Pro Controller too? The design of the Switch finally made sense to me once I realized this. At first I thought, wow, the wires are short enough that the only place I can keep the Switch Dock is on my existing mess of wires, and I have to kneel down there every day and connect these joycons back to the Switch when I’m done playing. And then I saw your comment about the battery lasting days, and I thought, wait, then I don’t have to get down in the wires every day. I can just keep these joycons wherever. I only have to attach them once a week or so.

Never used up the joycons, but I never used them much!
The Pro Controller is part of my hands.

Joy cons? Or the Pro Controller too?

I believe the Joy-cons each have around half the life of a Pro controller - which is still 20 hours. The Pro controller is a ridiculous 40 hours per charge!

Took the advice and ordered a couple pro controllers off newegg, wasnt cheap, but my newegg card made it feel less painful.

tl;dr they all use the same shitty parts 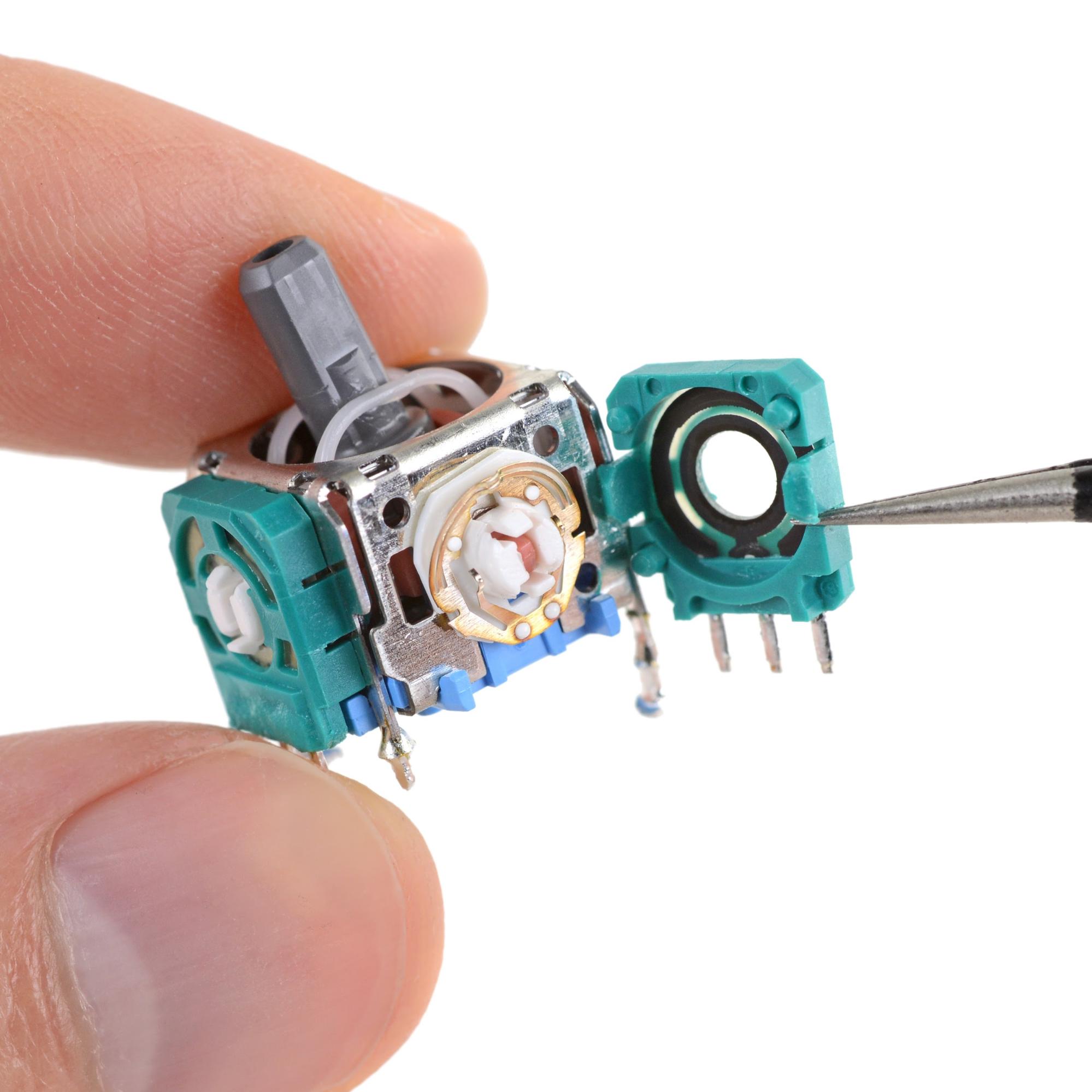 Why are the PS5’s joysticks drifting? They use the same fallible hardware as most game controllers. Here’s what’s happening inside, and how we could fix it.

I haven’t followed or played Pokemon games myself for quite some time. I liked many core aspects but didn’t find new iterations of the series different different enough. Specifically I was bored that battles always devolved into super effective one shots after a while and that the ability to just go out and catch a team of Pokemon you like was very limited. The last one I actually played (might have been Black/White? Silver? The original Pearl? not sure…) had the majority of it’s catchable Pokemon only accessible after you completed the story and beat the final champions for instance.

I have read that Sword/Shield has some light open world parts but it’s difficult to find concise summaries.

So my question:
How much are Sword/Shield and New Diamond/New Pearl similar and unchanged from that old school Pokemon design?

Sword/Shield is pretty similar, honestly. Like you, the last pre-Switch Pokémon game I played was White/Black but lost interest in it before too long. I played the first gen and second gen games back in the day and revisited Fire Red/Leaf Green on a rom several years later.

That said, I thought Sword/Shield was pretty good—the design of the new Pokémon is better than what I had seen post-Gold/Silver for one thing—and its quality-of-life improvements (easier to switch out Pokémon without having to go back to Pokémon Center, for instance) were welcome. But, its fundamental game design loop was unchanged. There are some twists to battles—partner battles with more than two Pokémon battling at a time, an option to temporarily make them grow to gargantuan size, and some raid-style mission battles—that shake things up a bit, but it’s still familiar and these new systems need minimal explanation to make sense if you’ve played previous games. This also means that, yes, battles frequently become about exploiting weaknesses and move at a very brisk pace (its battles not being slogs of attrition was something I appreciated about Pokémon, but admit it can lack combat depth consequently). There are probably more Pokémon to catch in the game than in previous entries and there’s a large zone that facilitates catching them, akin to the Safari Zone in the first games but on a much grander scale and accessible far earlier. It definitely felt like I had more options as far as which Pokémon to use compared to previous games, but there are inevitably certain Pokémon not available until latter parts of the game.

Sword/Shield is largely what you would expect a Pokémon game in 2019 to be: no radical changes, but modernized with new additions handled with competence.

Edit: Also, since it’s been a minute since you’ve played, you might not remember that it’s not a particularly challenging game. I believe most adult players looking for a challenge opt to use house rules to add to the difficulty (things like retiring a KOed Pokémon, or limiting the number of gym battles they can be used in, playing under leveled, etc.), but you can also just kind of chill with it and catch different Pokémon of course.

How much are Sword/Shield and New Diamond/New Pearl similar and unchanged from that old school Pokemon design?

There is something a little more radical coming at the end of January, Pokemon Legends: Arceus.

How to catch and battle Pokémon on your Hisui region adventure.

So much so that they’re not calling it a mainline game. Looks to be proper open world, and the battles have changed a bit too, similar I think but factoring in stats like speed to determine turn order and frequency.

Sword/Shield is largely what you would expect a Pokémon game in 2019 to be: no radical changes, but modernized with new additions handled with competence.

Thanks. After a decade or so that is good enough for me to try it out.

There is something a little more radical coming at the end of January, Pokemon Legends: Arceus .

A news snippet I read about that was actually what spawned my original question. I am interested in something Pokemon + open world.

There is something a little more radical coming at the end of January, Pokemon Legends: Arceus .

I think probably if I were in the position of @Therlun, I would be tempted to wait for Arceus if I knew there was only room for one Pokémon game in my gaming future. But, that’s assuming you’re not specifically looking for an update of a familiar design (which Sword/Shield definitely is) as Arceus does seem like a big departure. There’s also a far greater potential for Arceus to not pan out whereas the mainline series has a built-in quality control to it at this point (I can’t imagine a mainline Pokémon game being anything worse than okay.)

But, Sword/Shield isn’t that much of an open-world game. Its 3D presentation just makes it sort of feel like one.

Well wtf. I bought Fire Emblem through Amazon, redeemed the code to my Nintendo account, and the dumb game doesn’t seem to want to download.

I see it in the “redownloads” section of the eShop app on the Switch, and the redemption in my purchase history on my account, but when I tell it to redownload nothing seems to happen. Says redownload started, but nothing shows up on the Switch home screen.

Servers probably overloaded. Happens a couple of times a year. The exact same thing you described happened to me in Europe… when it was the Japanese Golden Week, and it was driving me cwazy!
The item will eventually show up on the menu, and eventually eventually be downloaded.

Yeah apparently complaining about it on qt3 is what I needed to do to make it work. It’s downloading now, huzzah.

Yeah apparently complaining about it on qt3

My uncle works for Nintendo and I called him to escalate it.

Lantz’s uncle is the real homie.

To add to the very excellent writeup from @Dissensus , there is a wild zone open almost from the beginning. Whats unique about it is that it is semi open world, has maybe 2 dozen ‘locations’ with distinct weather, and what pokemon spawn in an area is weather dependant. So snow will have ice types spawn, naturally, fog will see ghost types and rare pokemon, sun fire types, etc.

So from the word go you can collect a highly varied team of many types. There are spots that only are accessed by story gate items, mainly bike upgrades, but nominally there is nothing preventing you from going anywhere in the zone. You may be blocked from catching anything in some areas as the old badge pokemon catch level limit is still present.

But you are going to be able to build a more diverse party early, including some quite powerful ones. That said from an ‘optimal’ play, fire has by far the most powerful pokemon available early, as there are a lot of quality fire types in the early wild zones. Water is well represented too, I mean if you’ve played the original you know the Magicarp deal. Grass is the type least well represented in the wild zones.

One big QoL update is the pokedex will tell you where creatures are foond, and what weather, once you see one in battle. So if you want to know how to find that elusive larvatar or growlithe, it wiill tell you exactly where and how to find them. Which is nice to have in game as opposed to searching a guide. Especially for the really elusive ones like Dragonaire.

Got Xenoblade Chronicles and Golf Story on sale and my god both are excellent so far.

All the SaGa series’ games are on sale suddenly today. The newest SaGa game and the 2 Romancing remakes are quite on a high discount, 70% off.

What is the SaGa series?