I personally feel it’s much less punishing than the likes of Dark Souls. It isn’t an easy game, but it’s definitely manageable, partly because you also have a lot more options in how to build your character compared to DS. Or at least that’s how I feel.

I personally feel it’s much less punishing than the likes of Dark Souls.

I, on the other hand, cannot fathom how anyone would say this. I probably have two hundred and fifty hours collectively between the various souls games from Demon’s through Bloodborne, every boss, and Nioh 2 makes me rage and not just the bosses, either. It contains what I consider a ton of bullshit, like incredibly fast windups on attacks that come after a large pause so there’s just no way you could see it coming, and the tracking on grab attacks is just fuuuuuck yoooouuu. I think it’s much less fair. However, it’s got much deeper systems and I think the bullshit is worth putting up with as long as your blood pressure isn’t too high.

I, on the other hand, cannot fathom how anyone would say this.

Which is curious indeed because I mean it. I played all Souls games, never finished any of them because I would get exhausted by the “git gud” kind of approach. I finished Nioh 2 and I plan on going on through most new game plus things because I love the game. And I happen to think it’s a lot less unfair than any of the Souls games.

So yeah, it is curious. Maybe there’s something about the movesets, or level layouts, or objetives, or loot that make me prefer the Nioh games. Perhaps it only goes to show how individual perks and preferences can drastically change the perception and/or enjoyment of a game. And I’m fine with that. I won’t ever question why someone would love Souls more than Nioh. It just isn’t my case.

What do you think is unfair about souls?

Maybe unfair isn’t the term - it’s more that it relies so much on trial and error that I find it tense and tiring. Oh hey, there’s a hidden enemy there you couldn’t possibly have seen ever, and you’ll only know it was there after you die. Oh hey, that’s a cool dragon. Hey, it torched the whole place and I died. “Cool”, let’s go there again.

Now, as I said, it isn’t necessarily unfair. It’s the way the game is designed, in a way. But after a while it wears out for me. Which, I guess, is why I never finished any Souls games.

Nioh 2 has some of those things, but it’s… different? I can spot most, perhaps even all enemies. I have more options in terms of blocking or dodging or engaging at range. It’s easier to find gear you want without going to specific places or facing specific enemies. All that means I can adapt better and play to my own strengths - which you can do in Dark Souls too, but only AFTER you’ve played most of it.

Interestingly enough, I did feel that general feeling of “unfairness” in Nioh 1, to an extent. In Nioh 2 it’s pretty much gone, really. And I’m not entirely sure what changed to make me feel like that. Maybe the way spirits work now? Maybe because the ocurrence of “traps” is much lower and easier to spot and adapt to? I don’t know. But I enjoyed it a whole lot more.

Well, I’m not going to argue that your impression is wrong or anything, but while it’s true that Souls games have hidden enemies, Nioh 2 has that in spades, too, and they attack much faster! Also the amount of times a fight took place on a narrow cliff edge, bridge or other eminently fall-offable space was too damn high.

Point being, @Bruce_Barnett, as far as difficulty goes, opinions very much vary.

Yes indeed! It’s a personal thing for sure. A close friend of mine told me Nioh 2 was more difficult than Souls and Nioh 1 and Code Vein and everything. That wasn’t my experience at all, but I’m not saying I’m right and everyone is wrong. Just that these kinds of things happen. Nioh 2 clicked with me for some reason. I don’t expect other people to feel like that, but I suppose there are some who might. ;)

Yeah, Nioh 2 felt waaaaay less “bullshit” to me than any of the Dark Souls games.

It’s a hard game but you have more tools/approaches than you do in Dark Souls. It’s less about memorizing patterns, although understanding how different bosses/monsters attack is going to be a huge help. It just felt a little less focused on that exclusively.

I found the initial part of the game quite hard. The first two bosses really took me a while to down. Then there was a breakthrough moment as I got accustomed to the game and acquired more tools in the game where it became a fair amount easier than Dark Souls. It would oscillate a bit but overall I found it not as hard as the Dark Souls games. Still quite challenging, but with the Diablo-ness of the systems you can kind of outlevel/outpower content that you struggle with to some degree.

I have more options in terms of blocking or dodging or engaging at range.

I glossed over this earlier. As far as blocking or dodging, both are integral to Souls, so I’m not sure what you mean by more options, but engaging at range is not really optional in Nioh but mandatory if you don’t want your ass handed to you on a plate, in my opinion. Ranged combat was always very much lacking for me in Souls games, but if you don’t pick off enemies, especially ranged ones, in Nioh, you’re gonna get mobbed and/or pincushioned.

I again stress that it’s a very worthwhile game that’s much deeper than Souls in some ways (loot for sure, the weapon styles and mix and match moves and on and on), and I look forward to engaging with it again, but the claims of “less bullshit” make me nearly unprecedentedly boggle! To boil it down, for my part the souls games set up an environment and say, do this or don’t, whatever, I don’t care. It is supremely indifferent to the player’s woes. To me, Nioh actively fucks with you. Taunts you. Hates you. But sort of jokingly, like an older brother.

I agree & disagree with you both on your points. Nioh 2 is harder, but the solution for any challenging engagement or environment without usually presents itself on first attempt.

Often that solution is as suggested, don’t just melee wade into mobs but use the variety of ranged options to either neutralise individuals outright, or aggro them to advance on & engage with you One-on-One in a more conducive location for you.

In this respect, I find the comparable options (or lack thereof) in DS leads to a “less fair” experience, along with “less fair” bosses. I have finished both Nioh 1 & 2 in several iterations of New Game+, whereas I’ve abandoned both DS2 & 3 before completion, after repeated “boss skill-checks”.

… and Bloodborne after countless attempts at The Orphan of Kos.

Orphan was brutal, except for, I think, @Rock8man, for whom he was nbd, much to my astonishment.

I was way over-leveled by that point, so it’s not really a fair assessment.

Hah, bosses in these sorts of games are funny like that. Horror story after horror story about running into Gorefist as your first boss in Remnant of the Ashes and I had him down in about 10 minutes and didn’t understand what the fuss was about. Yet other bosses that people breezed through I struggled with SO bad.

Nioh 2 is really a couple of games in one to me. The first game is the one you play before you have enough stat points and equipment for a real build. That is a very hard game. You don’t know the levels or the ins and outs of the enemies. It can be very difficult and frustrating. Then, combat starts to click. Shortly afterwards you are focusing on putting together and honing a build. Once you get there, the game hews closer to, say, a diablo-like, where you are pushing the boundaries of what your build can do while spending alternate time farming up your gear, levels and coefficients. This second game is much easier.

That’s a good way to put it, although I come from the character action side of things, where the first playthrough you get knocked around by all the enemies, but after a couple playthroughs you are dancing around them and killing them in stylish ways. (The first playthrough in games like that can still be pretty frustrating when you get broken out of your flow even if you don’t take enough damage for it to be a threat.)

Anyway, it’s more likely than not that you will not enjoy Nioh 2, Bruce. But eventually you might reach a game that aligns with your interests. You can cheese some of the game until you get there, and they cut out a lot of the boss runs and other annoyances of Dark Souls, but you’re still doing Dark Souls things for a while.

Thanks for all the replies. I think this goes on the wishlist and I will keep an eye out for a deep sale or hope it gets added to Gamepass at some point. I’d like to try it and see if it hooks me, but I suspect I would rage quit early on.

I have such a hard time sticking with one weapon.

I have such a hard time sticking with one weapon.

Why ever would you want to? Whether you’re a serial respeccer like me or not, everybody can benefit from having at least different primary and secondary weapons to use in different situations.

Anyway, I’m halfway through DotN now. Still on the Tsukuyomi build, though I’ve been mixing it up by using a sword and odachi that are transformed to scale off of Magic.

This might be my favorite build in either game so far. It’s such a fun play style, where you’re incentivized to alternate between onmyo and melee, with both benefiting the other.

Dream of the Nioh complete! Seemed to blur together with DotW a bit more than I remember from the first game – am I misremembering, or were there a wider variety of mutators there that could apply to enemies there rather than the single generic “curse”?

Did part with Ame-no-Uzume, which is focused around dodging, but I wasn’t able to make it work very well. I’m just not consistent enough at never getting hit to keep the Death Dancer effect high, and even when I managed it for a while, it seems to decay pretty rapidly.

After that, tried a tonfa build with Acala’s Grace, and that worked better. It’s pretty similar overall, but it incentivizes blocking instead of dodging, and the buff seemed to last a lot longer, which helped me a lot. With heavy armor, a blessed weapon to be able to ki pulse off blocks, and some gear that reduced elemental damage while guarding, I was able to turtle up pretty effectively, and then unload whenever there was an opening.

After that, went back to wrap up a couple loose ends: 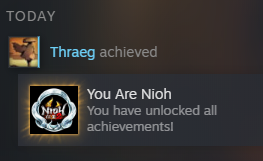 I still have more builds to try, and have only done the first three floors of the underworld, but I think this makes a good breaking point for the time being. All told, 255 hours over three months, and I don’t think anything is likely to top this for my GotY.