This game and the currently available demo really deserve their own thread. First announced ten years ago for PS3 is now looking on track for a release this year on the PS4. This week an “Alpha demo” was published on PSN which can be played until May 9th, I believe. 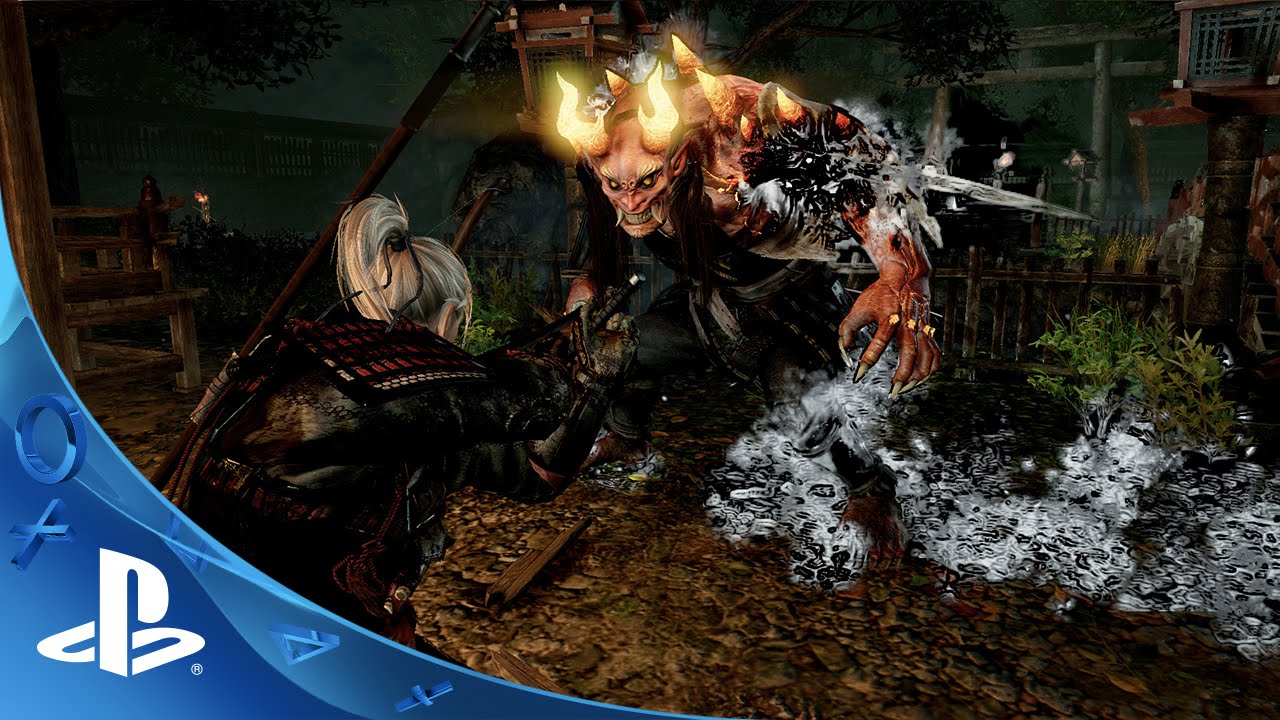 Structurally the game borrows a great deal from Dark Souls, but the combat is a lot more technical and punishing, drawing from Team Ninja’s heritage of combo-heavy, blistering action games. You wash up on shore and immediately find a sword and a shrine which acts like your Bonfire. You collect Amarita which you spend to level by defeating enemies, but there’s also a major random loot system. Since you’re essentially naked at first just killing one or two guys in a single life can be progress as long as you’re finding new armor and weapons.

Ki is the game’s stamina and managing it is incredibly important. Unlike Souls games running out bends you over, huffing for breath. You can also see enemy Ki levels and if they deplete their bar fully it’s possible to get in a special execute move. Attacking, dodging and blocking all take Ki so it’s important to be careful not to overextend yourself, but there is also a system called Ki Pulse where you hit R1 after finishing an attack combo to instantly regain most of your Ki. You also have multiple weapon stances and you can recover even more Ki is you switch between stance to link combos together.

A few tips for people trying out the demo:

Look everywhere and smash boxes. They can drop items to repair your weapons and armor.

Use rocks to draw out enemies one by one at first.

When upgrading your stats be careful. They do not translate to Souls stats of the same name. Different weapons types scale with different stats. and Stamina is for equipment weight, not Ki. Heart=Katana, Strength=Axe/Hammer and Skill=Spear. Spirit unlocks buffs from your Animal Protector Ghost thing.

Offer all your junk gear to the Shrine. You don’t just get exp, you’ll also get additional healing items, arrows and other very valuable items.

Don’t forget to unlock new moves and skills. Some of the combos will be hugely helpful.

Elemental magic buffs for your weapon are very helpful.

This thread title is still topical!

They’re doing another demo in August that smartly incorporates some fan feedback from the first one. I also hope performance has improved. It sounds like it’ll be the same demo content plus a short tutorial area in a dojo.

Last time there was a demo, I did download it. And I played it a couple of days later, only to find the message that the demo was no longer active.

Boo i didnt download this at the time but i was hearing about this and then this thread made me excited that i could try it out.

I should have known. Every time i try to download a demo on PSN, it is always an extremely painful experience that ends with failure more often than not.

There’s another demo coming in August. Mark your calendar this time.

Yes, the previous demo was time limited, which I noted in the first post. Don’t miss out on the next one which may be as well.

The second demo will be from August 23rd to September 6th. I’m sure I’ll bump the thread when it’s out.

Info on what’s in the beta demo Koei Tecmo has revealed new details on the downloadable beta demo for its upcoming action RPG Nioh. The beta demo will be available via the PlayStation Store from August 23 until September 6, after which time the demo will be disabled. With the demo,...

Along with a new trailer

I forgot the clowns at PSN USA don’t update the store until the afternoon (compared to midnight for all other civilized parts of the world). Same problem as last time.

It’s a bit of a bummer since Madden and Deus Ex both released at midnight. I’m quite frustrated the Nioh alpha is out everywhere but North America right now.

Seems the PSN store has been updated with the Nioh beta demo page, but I can’t see any button to download it. I can see it on the UK’s PSN, but not in the USA/Canada.

Performance is vastly improved. I think they downtuned some of the light (seems a little fullbright) or fixed the torches because now it seems like a steady 60 fps in action mode. I miss the cripsness of 1080p in movie mode – and movie mode with unlocked frame rate isn’t bad – but the upscaling is tolerable enough on a TV to make action mode the best balance.

I don’t know if I have a poor memory or what, but I swear the UI and effects are clearer now. (I’m noticing the little red icon to do a finishing move more often now.) And did they redo the skills? There are some pretty sweet-looking ones.

The change to lock-on is fine. NeoGAF was all worried it would make the game too much like Dark Souls. The only oddity is it doesn’t auto-select another enemy after you kill the one you’re locked onto. I prefer the stamina changes too: there’s less consumption, and you can no longer exhaust yourself by pressing buttons, only if you’re hit when you’re already out of stamina. It might make the game “easier” in theory, but I think it improves the flow by speeding up combat and making it less risky to go all-in. It’s still easy to overextend yourself, especially if you’re not taking a breather during a long fight.

Better performance and tuned gameplay means I’m even more excited about this game now. Can’t wait to get to the new zone.

Damn. I got so absorbed by DOOM tonight, I completely forgot to fire up this demo. Oh well. Maybe tomorrow. Last time I kept saying “maybe tomorrow” and then the demo wasn’t available to play when I finally booted it up.

Well, if anything is going to out-souls Dark Souls at being the best, hardest most brilliant game out there, Nioh is probably it. As it stands, it’s probably already my game of the year right there!

The only hting I could do without is the stupid loot pinata every time an enemy dies. It’s annoying to see items with pointless byzantine random stat upgrades pile up, it’s even more annoying to painstakingly separate the wheat from the chaff.

What do you mean by “painstakingly sort through?” Every 30 minutes or so I see if I have a weapon that does more damage (BLUE GOOD RED BAD) and sacrifice the rest for souls. I don’t mind a little inventory management (and it’s very little) so your mileage may vary.

My problem with the loot piñata is the particle effects blocking my view as another crazy person is trying to skewer me.

Also, I love when I take out fire archers with a bow and the golden-colored souls shoot over to me and I think it’s another fire arrow. Tricked me again even though I played the alpha, haha.

NeoGAF is far ahead of me (still stuck on the first boss again) and it sounds like some of the later content can be pretty hard.

Will remember to try this tonight!

Well, the game doesn’t make it that easy to keep one weapon of each type, since it sort of throws stuff up willy-nilly (none of the orders make sense). Are elemental damage bonuses added to the overall damage? Stance bonuses also kind of matter and I don’t think they’re reflected in the overall attack rating. There’s no item page just for ranged weapons too. Can’t seem to make sense of the crafting system either, but it doesn’t even seem to be worth it in the demo. Maybe it’ll all make sense in the full version. But it does make it so you should keep crappy items of high level to update your lower-level items with good abilities, which is something else to keep track of.

Also, better “blue” armors can be considerably weaker than they seem because heavier armor have a better % reduction as a special effect. At least, that’s what experience tells me, because I don’t really know how defense works exactly.

On top of that, you can’t get explanations of all the different bonuses when looking at your status, which is where it would be most useful.

Plus, you seem to get bonuses for sacrificing lots of items at once, which means they kind of encourage you to do lots of cleaning up all at once.

So yeah, lots of stuff to tweak in that regard. Still fun, though.

Ah, so it’s harder to sort through if you care about all the details. I just look at the big number and figure that’s good enough. Of course, I could really use some more damage against this boss…