If you turn multi off, do you still get the community bases showing up in Expeditions?

I found those could be pretty handy, as some are built to help you do the more obscure objectives.

Kinda/sorta. The game seems to automatically grab stuff from Online Discovery Services in the local region of space, and some player things do tend to get downloaded before the option is toggled off, and it’s hard to make them go away at that point. Especially comm balls.

So I started an expedition this evening and - oh wow. I don’t really know how to describe this because I’m not sure if it’s a spoiler for the main game - I mean I assume the expeditions don’t contain features that aren’t present in the main game? I guess maybe I’ll spoiler block it just to be safe -

So I managed to get to my ship, repair it, get a hyperdrive in place and fueled and then blast off. I think two hops on I ran into a pirate attack on a massive carrier - I help these guys drive off the pirates and I’m prompted to land on the capital ship and talk to the captain. I do this, and he then suggests that I take over as captain of the ship - which I did, and now I have a massive capital ship, along with a frigate I can send on missions! This is kind of nuts, I am blown away with how things escalated this quickly, and now I guess I need to figure out how my new little (big) command is going to work. I guess I thought I knew what the game was about, but now it’s kind of ballooned into something different. It’s pretty awesome.

Yeah that happens pretty quickly in the normal game, too! It is kinda cool. :)

I don’t really know how to describe this because I’m not sure if it’s a spoiler for the main game - I mean I assume the expeditions don’t contain features that aren’t present in the main game?

You’re probably going to love that freighter. It’s a real game changer. (Kind of OP, imo, but whatever). And yes and no. Just in case you want to keep that a surprise for your other playthrough, I’ll spoiler tag this: Expeditions advances a bunch of stuff at a faster pace, but freighters actually appear fairly early in every game mode. The first warp-in rescue event occurs after your fifth warp (if in an inhabited or formerly inhabited system), and recurs every five warps plus 3 hours cumulative play time. The first warp-in rescue event freighter is what’s known as a system freighter (smaller, variety of models), and subsequent rescue events are known as Capitals (much larger, only two basic models).

I guess that’s the danger of playing Expedition first. You kind of accelerate through the game and spoil all the stuff for yourself!

OK, that makes sense. In fact I kind of figured that probably happens in the main game, which is mainly why I spoilered it. I just found it a little amusing that I was talking to some alien that wanted about 4 million for an upgrade spaceship, and then I just get handed … that. And seriously, I need to think about how this changes things for me. Do I even need planet-side bases anymore? I am sure I’ll need to go mining and looking for stuff on the planet but a base on a planet just seems kind of redundant.

But yeah, I’m going to see if I can work through this expedition then go back to my main save and progress a bit more in my main game. I confess I’m doing a bit of speedrunning in the expedition, not really bothering to learn alien languages, not really doing much mining except to cover my immediate needs. And even still I’m swimming in resources from hitting milestones - it may be tough going back to the vanilla game!

Planetary bases are only strictly required for (1) the early Awakenings step, (2) the exocraft specialist NPC, and (3) industrial resource mining.

Edit: oh, almost forgot. In case you were wondering, here’s how much buildable space the freighter base has: 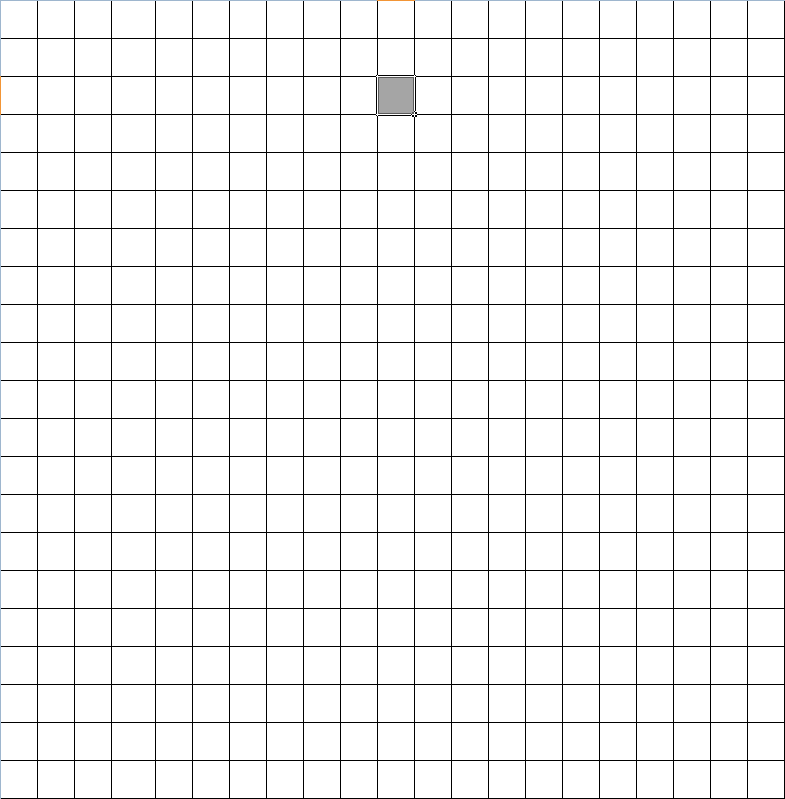 (The grey square is the ramp up from the freighter hangar, and you can have 13-14 levels.)

To add on to this:

While you’re at it, you may also want to turn multiplayer off entirely, to prevent crashes and other oddities.

This was a good suggestion. I had issues getting the freighter battles to spawn in expedition 1.
As soon as I turned multiplayer off, the battle spawned in the very next system.

Yeah, it’s a shame that multiplayer ends up being such a liability. Gets in the way of so many things.

Figured I’d at least pop in and keep the updates going with my expedition. I haven’t yet completed any one of the phases, but I’ve got a fair amount of progress in pretty much all of them. I think the overarching goal is to find these ‘rendezvous points’ but I haven’t yet found one, I guess they’re hidden? Nobody needs to answer me on that one, just thinking out loud. But I’ve seen and found so much, even stuff like black holes and some bizarre thing called an Anomaly, but no rendezvous points. Who am I rendezvousing with? Where are we going? Nope, don’t answer those either.

But I’m enjoying just kind of bouncing around doing random stuff. Earlier I said I maybe didn’t need to make planet-based bases but I’ve since decided that yeah, I probably do, and have made a few more across several systems. For one thing, it’s just too easy to build a teleporter in my base and pop between bases and even to starbases to sell stuff I find. I mean holy crap, I’m sitting on 7 million space bucks! I can finally afford one of those starships that dudes keep trying to sell me! But I’m not going to, because I like the one I have just fine. Plus, even though it’s C class and I occasionally find a B class someone will sell me, it usually has worse stats in offense and hyperdrive capability, so what’s the point? OK, you can answer that if you really feel like it.

Anyway, it’s still a lot of fun. I’m finding the weirdest planets with the weirdest life forms. I found a mostly mineral-based planet with these lifeforms that look like glass columns that just jet around. So far, to my pleasant surprise, I’ve found that no lifeforms are hostile. There are sentinels of course, but even they are mostly happy to just observe me as long as I don’t farm in their presence. You guys were right, this game is totally cool and a relaxing good time exploring the galaxy. I’m glad I got past all the negative hype this game started out with.

I want to answer the things you don’t want answered only because the expeditions are on a short-ish timer this time around.

Hmm; in that case maybe a hint? Are the rendezvous points tricky to find on my own? I assumed I’d stumble over them like I have other things as I work my way along the expedition path. If that’s not the case and I’m in danger of running out the clock, I guess I’d be ok with a little assist. Before you answer - will telling me these things give away things back in the main game? I do still intend to go back and play the game through, and it’s fun finding all these things on my own. But I’d also be bummed if I missed out on some cool stuff because I couldn’t complete the expedition before time runs out.

I think I’ve talked myself in circles here. I’ll trust your collective judgment on this, folks.

For me IMO No Man’s Sky is a once-and-only play through. Grinding and base building I have no interest in.

Regarding the ship: Expeditions gives you a random one, so I can’t really comment on how good it is, but this chart might help you while you compare it to other ships: 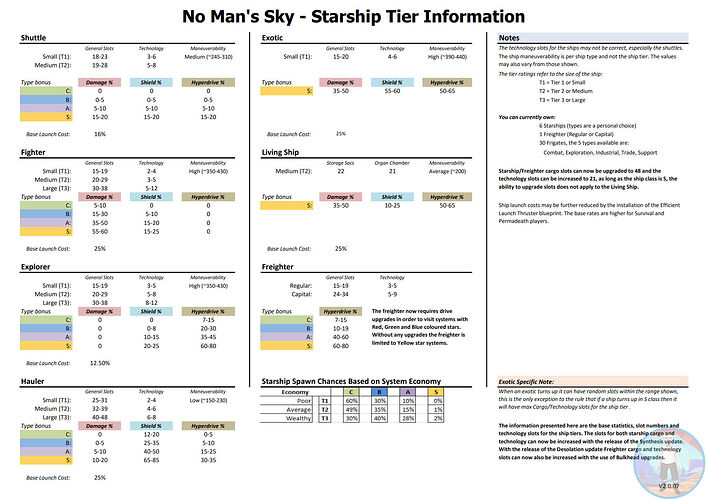 I’m tackling the scaled down version of Expedition 1 and it is fun. Going to do all three of the ones I missed over the holidays.

Some pro tips for Expedition 1 : (I’m going to spoiler tag them even though I don’t think they contain any real spoilers, just solid advice that can save a lot of time and units)

The toughest milestones to get in Expedition 1 are the exploration ones. Finding undiscovered systems is going to be next to impossible when following the expedition path as thousands of explorers have preceded you and they’ve charted every system around the path for 1000+ LY. I recommend upgrading your warp drive with S-class modules as soon as possible, and then either warping away from the expedition path in a different direction for several jumps, or finding a black hole (also a milestone) and hoping it leads to an unexplored region of space. If you have a base with a teleport ring you can always port back to your base (and thus the expedition path) from any space station once you’ve completed the milestones. Finding an abandoned system seems to be dependent on simple luck, and is probably the most time consuming milestone. Note that the first undiscovered system you enter will complete the First Contact milestone, which rewards you with Cadmium Drive plans. Build the Cadmium Drive ASAP, as visiting a Red system is another milestone (which in turn leads to Emerald and Indium drives/systems/milestones) but the red/green/blue stars are far less likely to have already been explored by other players, meaning they can help you achieve the exploration milestones more easily.

They’re just waypoints, you should see them on the galaxy map and when you jump into the system they’re in.

The expedition goals/waypoints have very little to nothing to do with the base game.

Edit: Also in your main menu, the Expedition log, lists all the steps to finish all of the ‘phases’. You have to do everything, even if it sounds ridiculous.

Yeah, good to know. I don’t think I’ve come across any rendezvous points yet then, or maybe I’m just not looking in the right spot. Regarding phases, I’ve unlocked quite a few just bopping around doing random stuff, but I see that several of them involve finding rendezvous points so they stuck out to me at an activity I just haven’t done yet.

That’s quite a lot of content, and to be honest I don’t understand all of it. But that’s ok! I’m good with doing my own thing and figuring it out as I go.

Take a very careful look at the galaxy map when you jump from system to system. There are options there to change the view, including some to highlight paths to different objectives depending on your log quests. If you select the Expedition milestone for “Rendezvous One” or whatever as your active quest in your Log, the path to the Rendezvous system will be highlighted on the galaxy map. It will take several jumps to get there…then you’ll figure out what to do when you arrive.