Noita - all the pixels simulated!

That ice level is a massive difficulty spike. Asshole jetpacking pewpew guys and wtf why are there snipers. 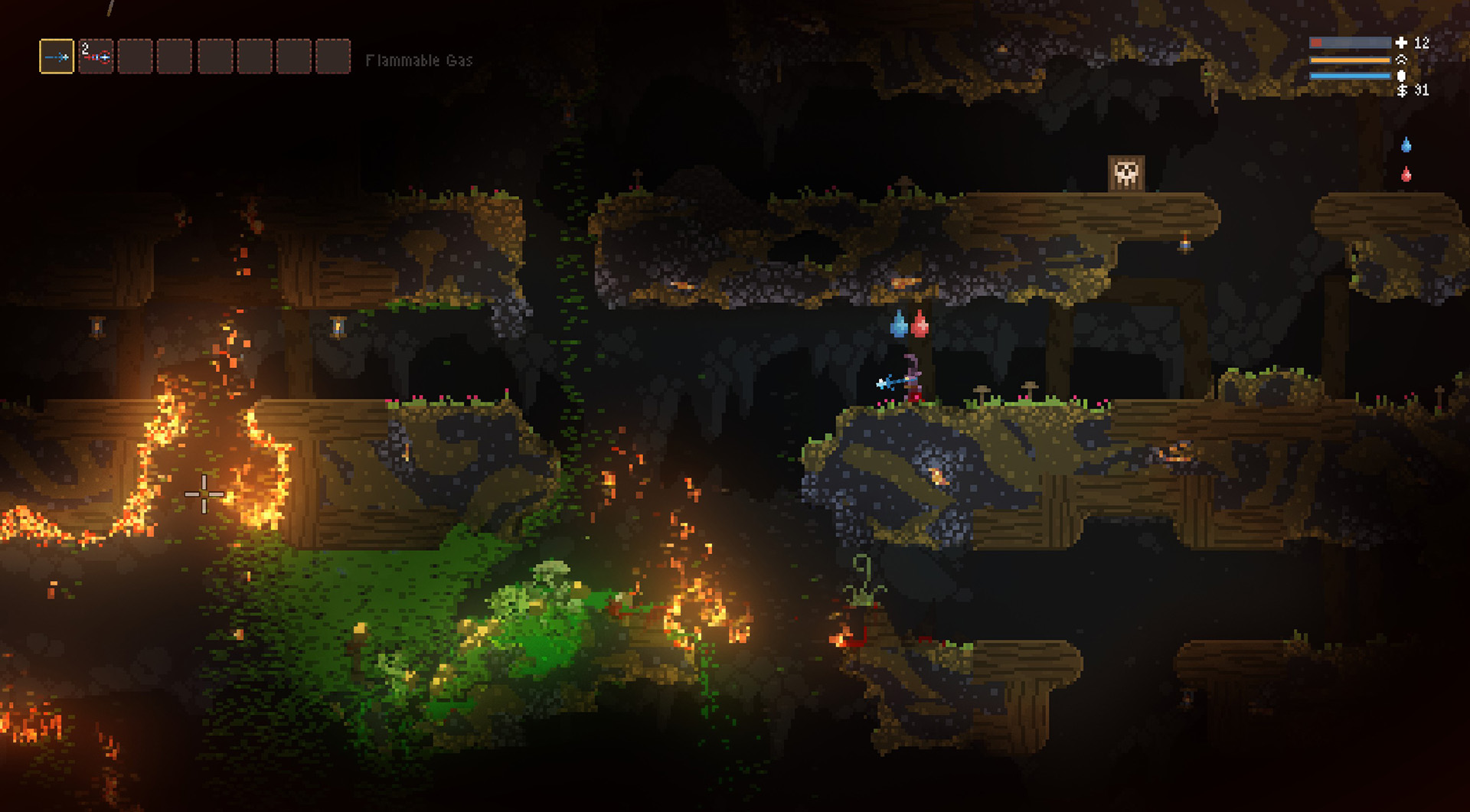 RIGHT CLICK WATER FLASK DAMN IT! I annoy myself.

Today I learned that Acid != Toxic while I melted the entire level (and myself) with Acid trail on a triple shot wand with a long duration projectile.

On another note, don’t think I’m getting past level 3 for awhile.

Man I’m annoyed at myself. I found a potion “Lively Concoction” that basically was healing water in level 1, probably super rare. What do I do? Drop a rock on my head immediately on entering level 2.

Also, the water in the safe spaces seem to be special that refills the original contents of a flask, so it was a renewable healing potion at that.

Damn, I feel your pain.


Finally made it to level 4! Then died to a slightly too itchy trigger finger (that gas canister hit a wall behind I think and bounced into my fire) 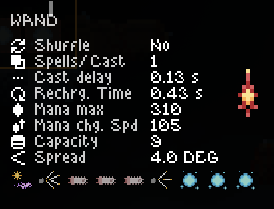 This was the wand that enabled it. Finally figured out how things work - basically spells become nested in the multicast.

And since all spells are cast, we go immediately into recharge (cast delay has no impact), which was originally 0.43s, but due to the presence of the chainsaws, gets reduced to 0s, leaving only the individual cast delay of the spark trigger itself (listed as 0.05s). So a machine gun to boot.

I would not recommend taking Freeze Field. All water freezes under you, or around you. You can’t put out fires anymore. And if water pours down onto you, you are trapped in a shell of ice.

Basically got Edit Wands Anywhere as the first perk, which allowed for a snowball. Second had the Perk Lottery, which then allowed pickup of explosion/toxic/melee/electricity immunity.

Ended up with these three carrying the day.

That first was a railgun of lightning explosions, but super dangerous until immunity which was picked up late. The basic pattern was carried through a few wands. Second was explosions, and the third was even more explosions. Also had another wand filled with concentrated light (laser?) that basically was a super machine gun.

Finally made it to the Hiisi base. Even survived for a while. It helped that I had immunity to explosions.

Ok I instantly see how this is like Cortex Command. The problem with CC though besides the lack of a real game was the horrible controls/navigation, and incredible slow down when multiple drop ships carrying multiple bodies all exploded simultaneously in a massive pixel mess. Looks like this game fixed those problems.