Nice list! I’m also good, but you can definitely get some money for the shrinkwrapped stuff, as well as Love for Sail, probably.

The rest honestly is likely not worth listing, but don’t take my word for it – look it all up on eBay!

The educational stuff and arcade ports can almost definitely go directly into the trash (or your local Goodwill, if that’s still a thing during the apocalypse), to save you some time…

(Edit: because arcade aficionados are generally after the actual arcade game itself – emulated at the very least – not a port for a dead OS on a floppy they can’t read. There may be some exceptions, so like I said, definitely verify!) 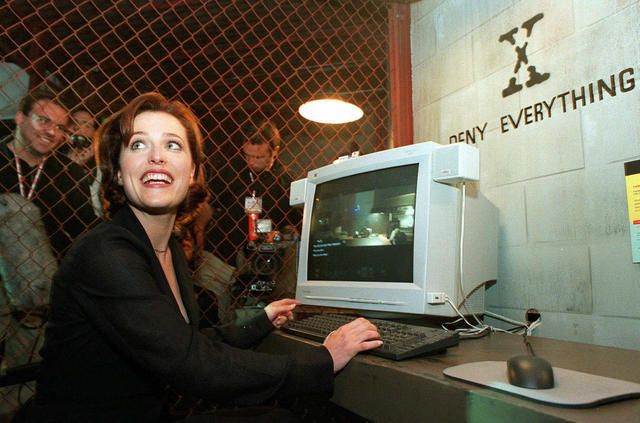 Not sure if anyone’d find this interesting.
I took some pictures before I started selling games.

Here’s the cheap ones from my gameboy collection and the Nintendo Power subscription I had for a few months. A few found good homes. The guy who bought some last night has a giant Super Mario RPG sleeve tattoo and almost complete Virtual Boy collection. 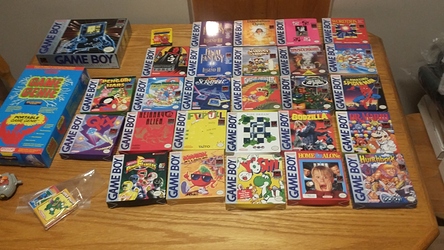 I also found Sega Screams Volume 2 in a drawer. o_o
No idea where that came from, never had a Saturn.

You’re selling them… I’m buying them… 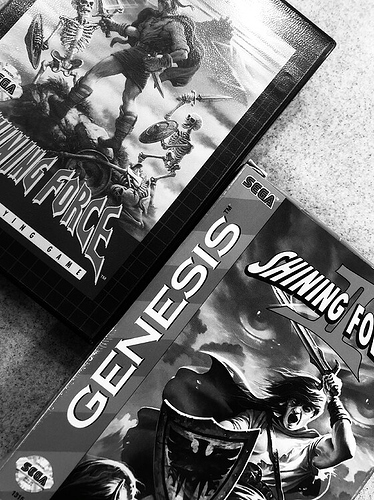 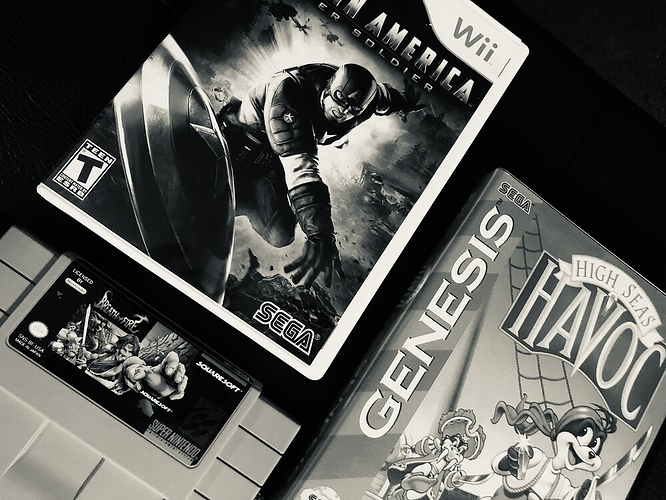 That was a nice Game Boy collection! Personally, unless I need the money, I won’t sell anymore. I understand that’s not how everyone else works, though.

Ummmm… a number of those Game Boy games aren’t “cheap” when they’re complete like that. Did you look up prices on them? Like… some hardly ever even appear on ebay at all in that condition.

Yeah, I should’ve put cheap in quotes. The others are crazy person prices.

I messed up one already not realizing the auctions didn’t include the game.

The local retro store tried to get them for almost nothing. Glad I didn’t let my parents handle them.

Yeah, I started looking up your stuff and when I see things that don’t even show up on ebay more than a few times a year in complete form, I’m always expecting big value. When that’s the case, you can often almost set the much higher new value!

I have Heiankyo Alien for example (cart only) and I’ve seen cart only for many of those in the retro stores, but very rarely see them with box and manual in mint condition. Stuff like Turtles is always valuable too it seems.

Just stay on your toes as you sell. Also, if you have Genesis/Sega CD/32X/Saturn/Dreamcast, PM me. :)

I got a steal on that Shining Force II. I paid as much for both as that is worth by itself. It was a good weekend when I stumbled into that one.

I’ve got this damn thing.
I bought it new 20 years ago, and it’s still sealed.
Problem is, I think it’s worth something because it’s sealed. I guess the game itself wasn’t very good, but that doesn’t matter? Anyway, I’m afraid to sell it anywhere for fear of getting scammed. I’ve never actually been scammed on eBay or anywhere else, but selling something like this makes me nervous.

I’ve also read that having it graded will increase the value, but I’m afraid to send it away for that as well.

I normally wouldn’t consider selling any of my games (and up until now, I haven’t sold a single one), but I got into some debt 5 years ago due to medical reasons, and I’d like to finally get out.

Any suggestions as far as lowering my risk? 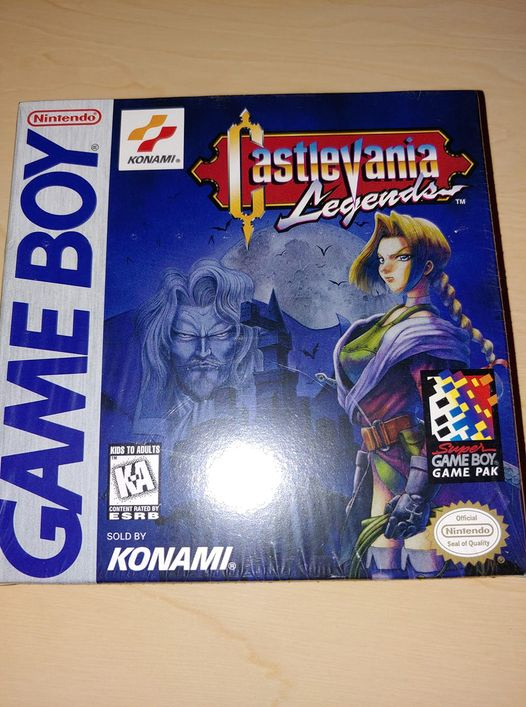 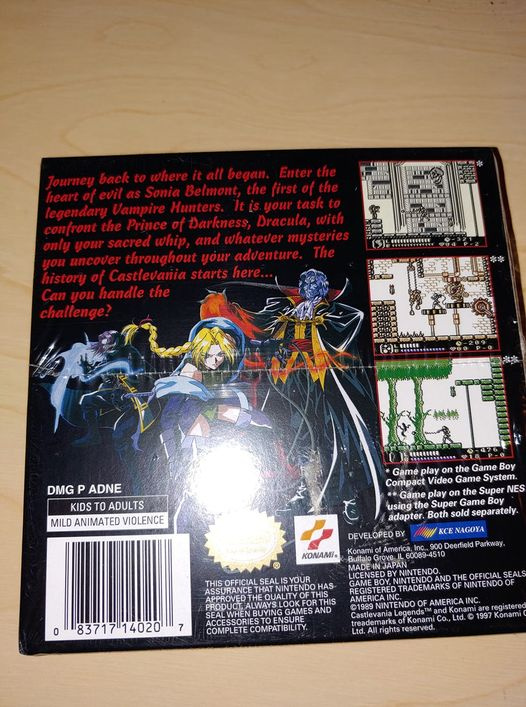 Hey, now that actually looks like it’s worth something! Just list it on eBay. I’d probably start it at $750, since I’m seeing complete (but not-in-shrink) copies listed for $500ish, with a good deal of interest, and selling for not much less than that.

I’d be prepared to drop it as low as $500 fairly quickly if I wanted it to move.

We’re not talking the Hope Diamond here. It’s a Gameboy game for a few hundo. A very nice amount of cash, but in the ballpark of what you’d have if you’d put the purchase price in an index fund in 1997. Don’t worry, you won’t get “scammed.”

Just make sure you pack it up real nice, in a sturdy box, when it sells, so it doesn’t get damaged in shipping, and insure it for the selling price if you want to be extremely careful.

YMMV, but for me, anything above a couple hundred is worth putting in the effort for a private buyer locally, although I happen to know a couple people who are active collectors and so they navigated the process for me any time I’ve sold something valuable.

I sold for a little less than the theoretical max asking price online, , but by saving risk and shipping and eBay fees, it was about the same.

Thanks for the advice.
edit: And thanks for yours as well, @CLWheeljack.
The only reason I know it’s worth anything is because I ran across it in one of those articles about the most expensive collectible video games, where a sealed (and graded) copy reportedly sold for $12,500 maybe 10 years ago…I can’t find the article now, and I realize those kinds of articles are a dime a dozen, so it likely wasn’t true anyway.

I’m seeing one new in shrink on eBay right now, in Paris, listed at $999. Maybe start around there or even higher if you have time to wait a bit! $12,500 seems unlikely, but if you can find someone to pay that, more power to you.

Yeah, I’ll hunt around and do a bit more research. Thanks again!

Ah, I see it now. That one is a Japanese version though. Don’t know if that makes any difference.

While I still can’t locate that article, I did find a site called pricecharting.com, where that $12,500 price apparently happened in 2012. It appears that sealed copies don’t sell often.

In any case, that $12,500 price was apparently an anomaly, with other sales happening at a much lower price range, which varies considerably.

Interesting! I guess it all depends on how fast you want to get rid of it. I don’t know how much I trust that pricecharting thing, but if I had all the time in the world I might list it at $2k or $3k since it’s just so rare to find new. Just know that however long the $999 Paris guy waits for his to move, if yours is more expensive, you’ll be waiting longer.

Not in any hurry, really. I’ve been whittling away at this debt now for over 5 years, and have been making slow but steady progress, but it’s been wearing on me. I’ll eventually make it out one way or another. I was just thinking it would be nice to take a big chunk out of it in one fell swoop. :)

Pricecharting and Gamevaluenow.com are what I use. That’s definitely a bit of a unicorn you have there and if you have more sealed stuff, it will also command much higher value.

One thing that’s happening now in game collecting is the people who collected comics, cards, sealed toys, and the like, are now looking for games. Sealed is their playground. They will pay and if you don’t get it graded, they will. That’s ok though because you can make a nice fee just because it’s sealed.

You should potentially list on http://www.retrogameboards.com I can vouch for you there if needed. There are other forums like that but you’d probably want to be around awhile before selling something so unique.

We’ve actually been talking about this a little on RGB. Folks there who have similarly weighty stuff (I do too… I have a sealed Castlevania: Aria of Sorrow for example…) say that Buy It Now on Ebay is legit and the way to go. Take a photo of the item in the packing box. Cover your ass in every way. Insure the shipping. Get delivery confirmation.

Some folks via Discord went back and located all the instruments used to create the music for Super Mario World and created an uncompressed version of the original soundtrack. I wouldn’t call it “restored” but more like modernized. It is also amazing to listen to.

This companion article about this relatively new phenomenon is worth a read.

Uncompressed source audio for iconic video game soundtracks is fun to find and to listen to, but it's not the "real" music.

What do they mean by “compressed”? Isn’t NES music just MIDI with low-fi chip-tune instruments?