Any suggestions for how to make rivers more visible? I use the filter (press N), but it’s not always obvious on curve how two hexes relate. They look fine on flat terrain, but not forests or hills.

Do you mean like a mod or something? The only ingame option is the filter you mentioned. But, yeah, I wish rivers “popped” more since they’re so important to combat, exploration, and city development. If it’s any consolation, you’ll learn to read rivers better the more you play.

…is anyone else finding that science production follows this pattern?
Turn 1 - 50: Your only beakers come from your leader and the courtier you marry. ~30 per turn
51-70: You start adding beakers 1 at a time in your three family seats. ~40 per turn
71-110: You double your science every 5 turns and end up 400+ per turn.

Something that’s not immediately obvious is that one of the main sources of science is kind of under the hood: specialists. Science production is a by-product of cultivating your advanced workers (called “specialists”), and not something you develop separately, which is how it works in almost every other strategy game I’ve played. In other words, science kind of “happens” as you develop your economy, regardless of how you develop your economy.

Which is why science structures like libraries and universities don’t add science production; they multiply it.

How do I tell when a resource has regenerated for another harvest?

How do I tell when a resource has regenerated for another harvest?

The harvest basket icon! One of the filters shows the icons, and they also pop up when you select a scout.

This one has a basket, but was not harvested yet. 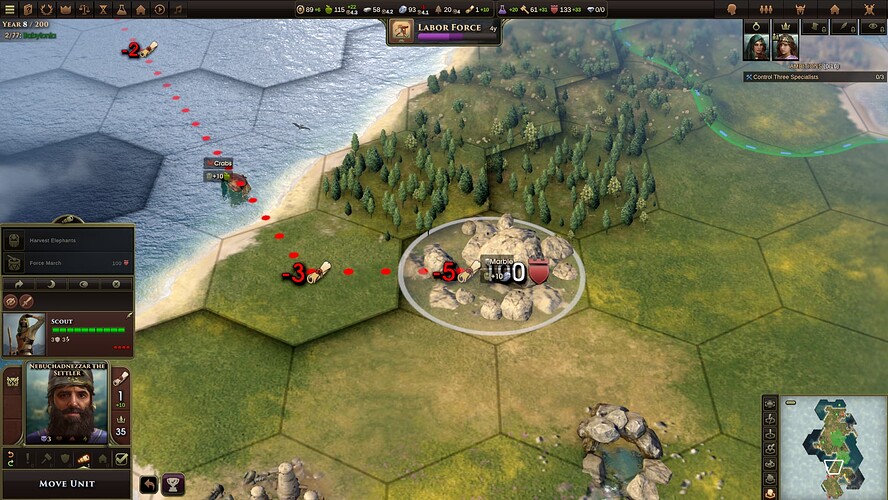 What I’ve figured out is that there’s a tooltip which tells you in words, but it’s to the right of the final letters in the resource label. I’d show, but mouse carrots aren’t visible.

This one has a basket, but was just harvested. 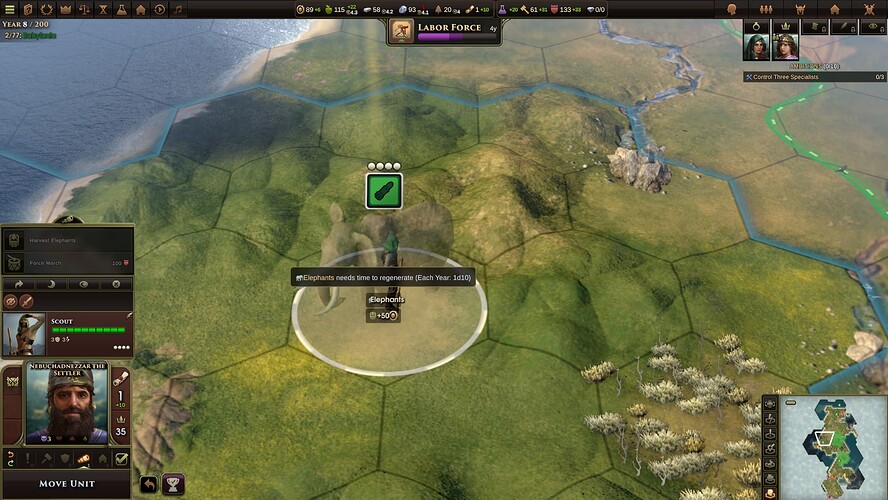 I also figured out that pressing F12 instead of Print Screen makes the game load your last quicksave.

I also figured out that pressing F12 instead of Print Screen makes the game load your last quicksave.

Since it’s not on Steam for another year, they’ve got time to work that one out. :)

The issue is that you have the Tile Yields Overlay locked, in which case the Harvested icon isn’t shown. (We can fix that.)

Do Cimmerian Archers require a technology? I cannot build them from my Strong city with a Citadel.

What are the benefits of establishing a State Religion? After reviewing the Tolerance law (-2 discontent per non-state religion), assigning a state religion seems like a non-obvious way to invest 400 civics. Here’s what I know.

Does state religion interact with Monastery, Temple, and Cathedrals? I build two sets of each in the game where I established two religions.

A single anchored ship creates a water travel zone of iirc 3 hexes diameter over which land units can sail just as they do in the water under control of a city. It’s a very elegant system.

Do Cimmerian Archers require a technology? I cannot build them from my Strong city with a Citadel.

Hmm, should just require the appropriate civilization, a citadel and resources. Can you see Cimmerian Archer greyed out? Can you build an Akkadian Archer there?

Yep, make a bridge of overlapping transit areas using the anchor command (and remember to wait a turn for it to become active).

I was mistaken about the Cimmerian Archer problem. I can build them, all is well.

Great pointer about “wait a turn for the anchor to become active.” I was about to direct my sages to divine portal machines.

I’ve reached the point where I’d like to try out customizing things using the in game editor. Much of the editor is similar to the editor from Civ IV so I can use that easily. The part that seems fairly opaque to me are the console commands - I can figure out how to use some, but many of them elude me. Is there a list of console commands, or a guide on how to use the console?

Are the promotions available to to a unit completely random? The first four seem to be random, but after awarding one or more promotions, are you choosing among the initial options that rolled?

Also, I’m still not understanding how to tell when a resource can be harvested again. I have no overlay locked. I have a scout selected. I can see the basket where I harvested one resource, but no basket where I previously harvested another. 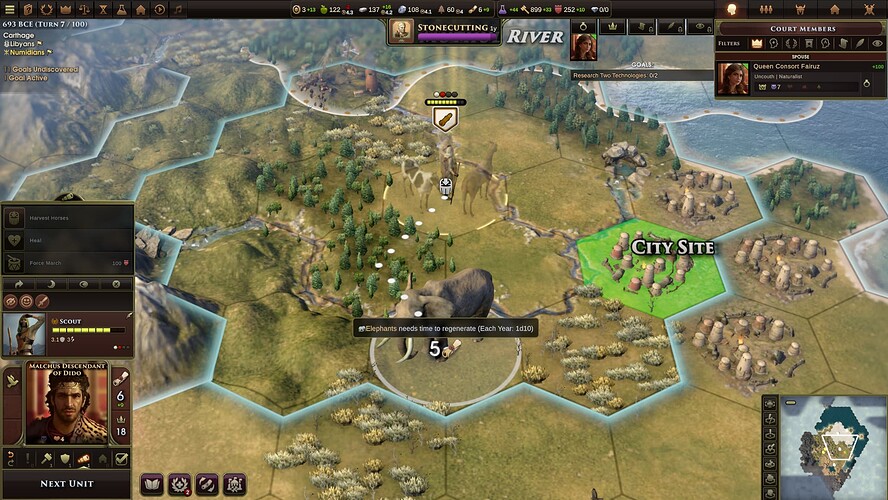 If there’s no basket, then that resource should be available to harvest. In your screenshot, in theory that elephant should be harvestable but since the text says it is not, I don’t know what is going on. If the elephant is not harvestable it should have a basket.

I think the scroll is covering the basket as the text explicitly says needs more time to recover.

That said a resource can also be locked if you are too far from one of your cities. Not sure the distance, but if your scout is too far, it can not harvest (I want to guess in the 10-15 tile range)

I don’t think range is an issue since the city borders are visible at the top of the screen. I think you’re right that the tooltip may be covering the basket/harvested icon.

The tooltip, which is explicit, does not cover the basket. There is no basket on this elephant.

I’ve realized the Carthage scenario part 1 is a tutorial on a map with no foreign nations. Are all the parts of the scenario for begginers?

Where do I point my mouse to remind myself what special ability my nation has? Babylon -20% cost for urban specialists, Rome +1 fatigue, and so on.

Weird, must be a bug. This is what you should be seeing. 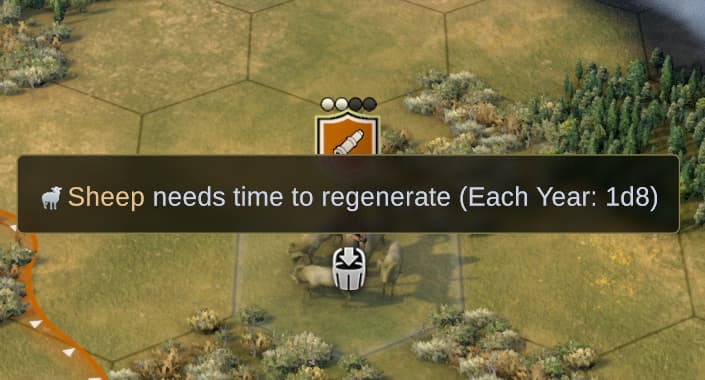 I look up nation details by hitting F1 then typing in the name of the nation, bonuses are listed there.

IF you have one of the overlays (like tile yields) locked, the basket doesn’t show. Should be fixed in the next update.

We have some mod documentation here: Support - Mohawk Games
Not sure if it covers console commands.

I haven’t been able to access those documents - I tried a few weeks back and again today and I sign up using email but then it says “check your email to complete the process” and I don’t have anything to click. I do get Mohawk emails as I signed up when I bought the game but the site won’t let me access those documents.

Also one of the documents is labelled “console commands” so it’s probably what I’m looking for (angry smiley!)

Edit: bah I think I see the problem - my PC uses my work email for google docs but I signed up using my personal email. Sigh, let me see if I can figure it out…

Edit two: OK I re-submitted my access request using my personal email so hopefully that will go through.