And if you’re very nice to Ms Theron, or Mrs King Tom, then everything will start looking up. As I’m sure you can imagine.

Prob should have been slightly less flip there - in case you don’t know or readers don’t know, you can spend resources improving relations with people - you can tell how they feel about you visually by a kind of coloured triangular corner marker in their portrait, if you don’t want to look at the stats

on is upset with me. Old World is great about giving me the tools to understand and quantify that fact. What I don’t understand is why t

Yes, you are getting 50% less Civics and Training than you would normally get because she is Upset with you.

Oh, wait, I get it now! I’m dumb! I didn’t realize my spouse was adding those values. I was accustomed to seeing those values presented as bonuses I’d get if she were the leader, but I didn’t realize my spouse added her global bonuses. That makes perfect sense, and I see now the global bonuses are halved. So, of course, now there’s an incentive to be in a happy marriage.

Well, it’s a moot point anyway, because I married Rebecca Ferguson instead, who wasn’t upset with me.

Yes, you get global bonuses from your Leader, your first four Heirs, your spouse, and your Courtiers. (Basically, everyone listed under the Court section of the Characters tab.)

And every other number in the game. Why are these different? They’re screwing with the birthday card I got my in-game wife.

you get global bonuses from your Leader, your first four Heirs, your spouse, and your Courtiers.

Ooh, I didn’t realize multiple heirs can chip in a bonus, too! Time to found Catholicism! Or at least pay closer attention to the succession laws.

EDIT: Wait, that means my lame-ass low-score heirs also apply a penalty! Gah! Why does family have to be so complicated???

Wait, so this is a deck building game?

Wait, so this is a deck building game?

You’re thinking of this. :) They have a lot in common, but only one of them is really a deck-builder.

I just got an event that was going to force me to choose between pissing off my leader’s brother, or pissing off the nearby Egyptians. As with many such situations, there was a third option to avoiding pissing anyone off, which I was able to select because my leader is “charming”. Behold: 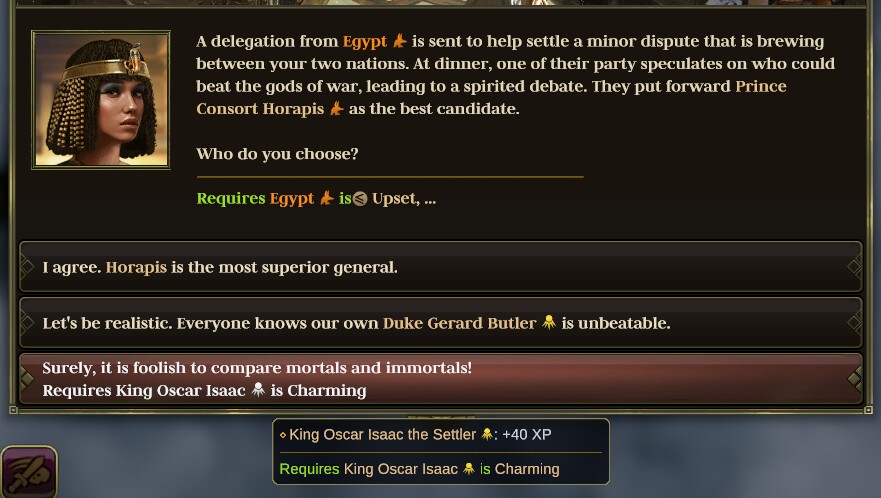 But hold on a sec. If I look at my leader’s stats, I can see that his traits are zealot, intelligent, dealmaker, and educated. 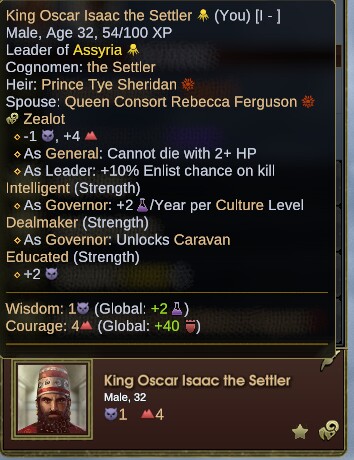 How is he getting to select a choice reserved for charming characters?

Well, digging deeper into the tooltips – there’s always another tooltip in Old World – I see that dealmaker is included in charming: 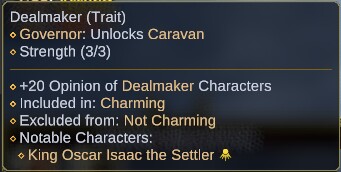 Which seems to mean characters have overarching traits that are actually buried a layer deep. My leader isn’t just a zealot, intelligent, dealmaker, and educated; he’s also religious, martial, inquisitive, seven virtues, and charming. Is that correct?

Q: For each trait, is there a “parent trait” that isn’t shown on the character’s info panel? Because wouldn’t I want to see these traits as well? And does that mean there are some traits that aren’t even displayed because they haven’t spawned any “child traits” through which I could reach them on tooltips?

These “parent” traits are really just a way of grouping similar traits together so that they are more likely to be relevant during events. They have no other gameplay effect, so we don’t list them (unless you mouse over the child trait itself).

Ah, okay. That’s going to be a bit confusing, to be told in the text that this option is only available to “charming” characters, but to avoid telling me elsewhere in the game which characters are “charming”. I guess that’s what the tooltip means by “included in charming”. Whenever something says “charming”, it means a variety of traits and I don’t have any way of knowing what they are. :(

On a similar note, I’m getting frustrated and confused trying to parse the effects of the four character attributes: wisdom, charisma, courage, and discipline (I don’t even know what these values are called and they’re not listed in the civilopedia, so I’ll just go with “attributes” for the time being). For instance, here’s a character whose courage of three would add 12 points of training if she were my leader:

So the obvious inference is that each point of courage adds four points of training. Easy enough. But let’s look at what my actual leader gets from his courage of four:

Q: What is even going on there? +40 points to training??? So much for my “each point of courage adds four points of training” theory. Does the bonus for courage hit a threshold at four where each point gives you 10 points of training? Or, more likely, am I misunderstanding how character attributes work?

Couple possibilities I can think of, interested in hearing Soren’s answer. First, it’s possible they don’t scale linearly. I’d be curious what a 2 Courage leader showed. Second, I wonder if personality traits can have an impact? The consort is also Unhappy so the stats may reflect that.

Just speculating, not trying to answer since I don’t know the specifics. :)

The consort is also Unhappy so the stats may reflect that.

Ah, excellent catch! And I see it’s the same upset character whose marriage proposal I refused. I see that she went off and married my brother instead. Ha!

So here’s a character with a -1 courage and no attitude adjustment:

And here’s a character with five courage whose furious with me because we started off with some vengeance thing and I just made it worse when I refused to spend 300 money to buy him a bunch of silk robes:

Of course, it can’t help that I didn’t like that Greenland movie that he was in.

Now if he were leader, I’m guessing his behavior mod wouldn’t matter, but it occurs to me now that he’s actually breaking even as the general of my most powerful unit. His courage adds 20% to their attack rating, but his furiousness with me subtracts 20% from their attack rating.

So… I’ve started the game for the first time as Egypt, clicking all defaults otherwise - and a few clicks later I’m… playing the game (hey - where’s my mood setting opening cinematic? LOL).

I go to found my first city - standard Civ stuff… and I’m immediately confronted with 4 choices. Apparently I have to pick a founding family… and each gives their own set of bonuses. But all the tool tips tell me is a wall of stats… and what I’m looking for is a little blurb kinda summing up why I might want one focused on Clerics vs Sages vs Landowners vs Riders

So can someone tell me what I’m in for with those 4 choices?

Your guess is as good as mine re: those stats. I’ve read everything everyone here has said about the game and I don’t have the foggiest.

So can someone tell me what I’m in for with those 4 choices?

There are ten different family types. Each nation gets four of them. In any given game, you will use three of those. Suffice it to say, it makes a big difference which you choose. Your choices will have ramifications in literally every other aspect of Old World. They’re arguably more meaningful than your choice of nation before the game started.

Each family type is listed in the civilopedia, so you can go there to look up the specifics.

I forget since it’s been nearly a year since I last played, does Rome start off diplomatically with everyone else starting from the position of not liking them?

Because my initial contact with 4 or nations where we have zero history starts with them upset or at best cautious.

Example: I’m located nowhere near Greece, yet my diplomat is informing me they’re upset. OK, so huh is it hard coded that the Greeks and Romans don’t like each other?

Because my initial contact with 4 or nations where we have zero history starts with them upset or at beast cautious.

As for any hard-coding between nations, if that’s the case, you’ll definitely find it in the tooltips.

Yeah - I’m reading through the specifics, and none of these mean that much to me. @SorenJohnson if you’re taking notes, it would be helpful to have a few lines of text above each Encyclopedia entry kind of summing up why you might want to pick each family for those of us who have literally no idea what these stats mean. I see Riders get me Connected cities. Is being Connected a big deal? Am I saving myself a few turns of work, or a LOT of effort?.

EDIT: Same goes for these techs! I’m all for specifics, but please put in some boilerplate dumbed down text for the ignorant :)