How are initial traits determined? Are they randomly added if the character ages on the shelf?

How are initial traits determined? Are they randomly added if the character ages on the shelf?

What do you mean initial traits? Because as I mentioned, there aren’t any! A characters gets an archetype when she turns 18, which determines her wisdom, courage, charisma, and discipline. Any additional modifiers – stuff like educated and superstitious – come from events.

In the Family section, it will list the archetype most likely to be found with that family, which give big Ratings (Wisdom, etc) boosts. All characters also have a chance each turn to have their ratings go up or down and to pick up extra traits (this is what you see in the turn summary). Events also do this.

Families automatically generate new characters if they don’t have enough characters (and the target number goes up per city).

I’m trying to figure out why I’ve never created a minor city.

What dictates the purchase price when buying tiles? Or specialists.

Minor Cities are really just a solution for what happens if your borders reach another city site (which is mire relevant in the OCC). You have to fully surround the land tiles touching all of the site’s urban tiles.

The purchase price of buying tiles goes up each time you do it (per city).

Thanks. By how much does the purchase price increase each time I do it per city? It doesn’t seem linear, or based on how many existing border tiles are adjacent. Likewise, the coin cost for rushing specialists in a city are not obviously dependent on the civic cost of the specialist + some adder for #times of previous rushing in that city.

Can you share the formulas, or do I need to break out a spreadsheet?

Looks buy tile cost also goes up each time you do it anywhere in your nation, and the distance from the city center increases it as well.

Ah, great to know. Thanks for the response.

I had been rushing specialists turn after turn, regardless of the city’s civics production, because the “X Elder Specialists” mission is a part of all my games. But now I know I should let them put a turn or two into the chain.

How is the amount of discontent for rushing determined? Seems like 15, then 16, then 17, but I’m not positive. 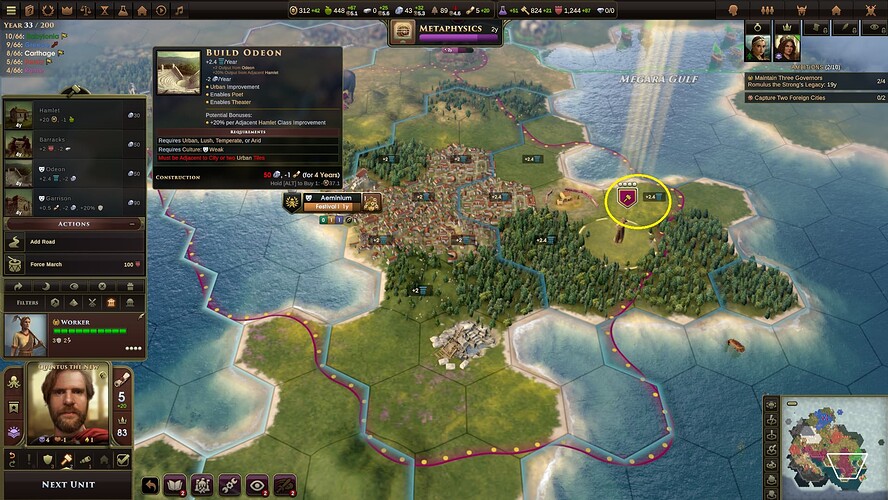 You can tell the hamlet is on greenfield, because the current border reflects the two point distance surrounding the original city. I’d have captured another three tiles to the east if the hamlet was built atop an original urban tile.

You’ll note that the game correctly disallows building an Odeon underneath the worker.

There’s a special rule for coastal tiles - IIRC you only need 1 adjacent urban.

Is there a way to see how many total citizens, or just specialists, a city has while on the city screen? It’s no big deal to click out of the city screen back to the map thanks to Old World’s fantastic interface, but I wonder if I’m not just missing it. I keep hovering my mouse over the growth bar in the lower left corner of the city screen, but that just tells me its rate.

Is there a way to modulate the religion a family chooses to have? I’ve been paying closer attention to details like maintenance and discontent levels, but this usually strikes me as arbitrary. In my current game, 75% of a family’s citizens were in a Jews-only city, and 25% in a second city with Judiaism, Greek Paganism, and Christianity. The family flipped to Greek Paganism within 5 turns of me capturing the city.

Well enough. This game keeps every turn exciting for one reason of another–I wouldn’t change it if I could. But I wonder if anyone knew more how family, and character, religion choices function.

Is there a way to see how many total citizens, or just specialists, a city has while on the city screen?

This isn’t the best solution, but if you mouse-over the Culture level of the city it will bring up a tooltip explaining the upkeep costs required for the city’s population. And part of that tooltip will be the total population for the city.

This is an older version of that tooltip, the newer version lists the total population figures:

Also, I did go back and fire Old World up again, and futzing around on the city screen it turns out you can get an even better pop up by mousing over the city name: 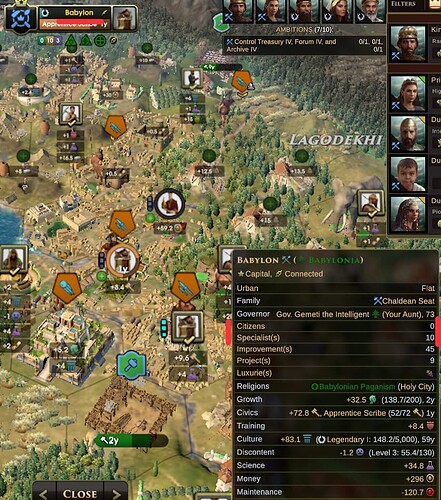 Ah, that’s great! I’ve been avoiding that tool tip, since it’s one of the longest in the interface and I rarely can get it to stick when I want to. The information hierarchy answers my questions only after a thorough investigation. But it shows me the number of specialists and total pop, as well as the number of improvements. I’ve learned in my recent game that maintenance depends on having a good ratio of specialists to improvements. If you have too many improvements without specialists, you pay for them. I think it’s more of a drag on your econodynamics than a strategic tradeoff, but however to think of it, if you have a tall empire, or even just one city carpeted with quarries, you might need to prioritize specialists to avoid coin shortages.

I also learned to think of food production as coin production, because 1 food = 1 coin when the price is as low as 2. My Landowners capital has three nets and three crop tiles boosted by three granaries and two specialists. One tile produces 42 food per turn.

If this isn’t already a word somewhere, I’m going to steal the heck out it.

Is this where we report game breaking bugs? I’ve seen this issue consistently with Babylonia: 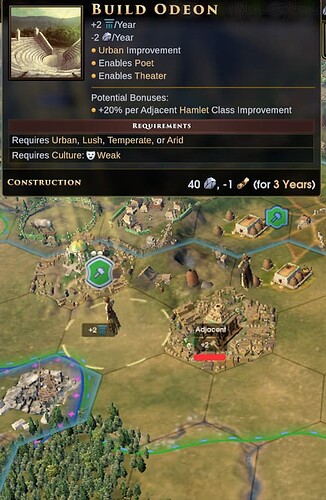 Who do I have authority to marry? I thought it was any unmarried successor 18-years-old. Is it just my heir (successor #1)? Does it depends on their relationship to the leader, i.e., you can order your kids to get married but not cousins or in-laws?

I think neighboring nations should occasionally request to marry one of your characters, and take them out of the game. It seems very one-sided I can snap up women, and men, from the surrounding nations and get +20 to +40 diplomatic modifiers with the nation.