Article on their upcoming game which sounds awesome. They talk about his thoughts on strategy games and 4x which is always illuminating.

Soren Johnson on challenging the norms of 4X games

“Sid [Meier] didn’t know he was inventing a genre back in ’91 – if he had he might have been a lot more careful. He was just making it up as he went along.”That’s how genres begin. By mistake. Somebody creates a set of rules and systems for the needs...

HA! I know. It’s more of a theory article than one about Ten Crowns, but still hoped to bait him to stop in and give us something - ANYTHING more LOL. Still love hearing his thoughts on 4x.

Not a ton of detail, and in fact you get a sense of how far (not) developed it is. However you get an idea for what he is aiming for.

Give it a listen @jpinard

I played it with Soren when he came to visit last summer (LAN party!) so I hope he drops in here to talk about it.

This doesn’t sound very well thought out to me. What do you call the inevitable sequels? 10 Crowns 2? 11 Crowns? 12 Crowns? 20 Crowns? Attack of the Killer Crowns?

Also, I think we can all agree that when you hear “10 Crowns” you immediately think of this:


[Album] Treat yo self 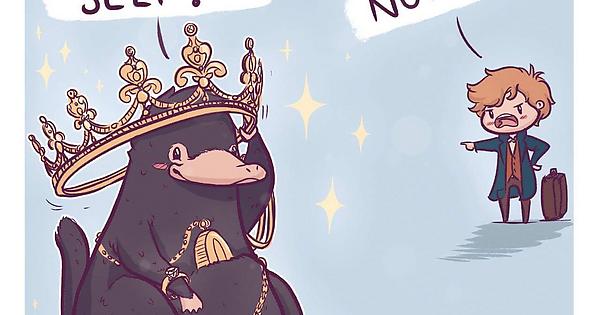 Which isn’t what they should be going for.

(although that’s sort of a given nowadays, isn’t it?)

Also, I think we can all agree that when you hear “10 Crowns” you immediately think of this

We can’t agree, because I have no idea what that is.

I think it’s a platypus wearing like 5 crowns. Maybe something Harry Potter related? I’m really not sure.

Indeed it is, it’s from Fantastic Beasts and where to Find Them.

He’s niffler, basically a platypus that has a pouch of holding that steals shiny things.

I’m really not sure.

So why would you say we would all of think of that when you don’t even know what that is?

I liked Soren’s musings on victory conditions. Who needs em? I love Crusader Kings II and EU4, and I’m not sure I’ve ever “won” either game.

But if there are to be victory conditions, then I hope Soren considers opponents that are inherently superior to us, not peers. (One of the comments on the article mentioned asymmetrical opponents as a way to get around AI challenges.) I loved “AI War,” because the game did not pretend that I was playing against a peer. I was playing against a supercomputer with more resources than me. The dungeon runs in Hearthstone (also mentioned in a comment on the article) work the same way: the fights aren’t fair, and I don’t care – they’re fun, and it’s satisfying when I win.

I liked Soren’s musings on victory conditions. Who needs em?

I do! I do!
I need the direction of developer specified goals.

I’d like to see a game not based around victory conditions but loss conditions.

Well you are thinking about it. I think history has proven me right.

The most exciting thing in that interview was the idea of making a game that is fun even without any other opponents.

I think the main problem with civ and 4x games in general is the whole notion of seperate city screen- instead of using the map itself for the development side of the game, it’s basically only there to move units around and build improvements(which you then have to go into a city and allocate a worker to) in, which seems very wasteful of these maps. Civ6 started to move things to tiles outside the city with districts, but it feels like not really doing enough, because to really see what a city is doing, you have to go into a screen, no matter how much text you put on its tooltip and numbers to show what it’s doing.

What if cities were just hubs for tile improvements which themselves give you their benefits instead of trying to shuffle workers around to optimize turn by turn, as cities grow, they get another tile improvement and then that contributes to the overall economy, rather than having each city be a microcosm. Maybe i’m off base here, but I feel like you could absolutely make a civ where 20-30 cities is very managable without automation, rather than the limit of 4-8 for most players, and when you have more cities, maybe wars can be more interesting because you can lose a few and not feel the need to mash the load button.