I want to get into Old World. Can anyone recommend any tutorial videos? Alternatively, is there an up to date manual? Please and thank you.

I posted links to the manual and other resources here.

My general view at present is that, as someone with little experience with 4X and particularly Civ–and I’m rubbish with history too–Old World needs a much smoother introduction and ‘first experience’. I’m no good with real-time strategy and economics but Offworld Trading Company effortlessly got me on board. The canned tutorial stages introduced the basics before pitting you against a competent AI to test what you’d learnt, and that was enough. I feel like Old World needs something like that, even if it’s just to get you started. Maybe a bespoke tutorial campaign so choice is backloaded in favour of introducing the game’s HUD, core concepts and how they relate to each other.

Well, Mohawk definitely made good on all this! I’ve been slowly working through the tutorials and they’ve been fantastic. Not much more to add just yet but I’m grateful they’re there now and I feel like I have a much better handle on a lot of things already.

An aside: I was just choosing my next research path and saw ‘Border Boost’ (+6 border tiles to all cities). Huh, that sounds useful but… how do I know which 6 tiles for each city? Well I noticed this: 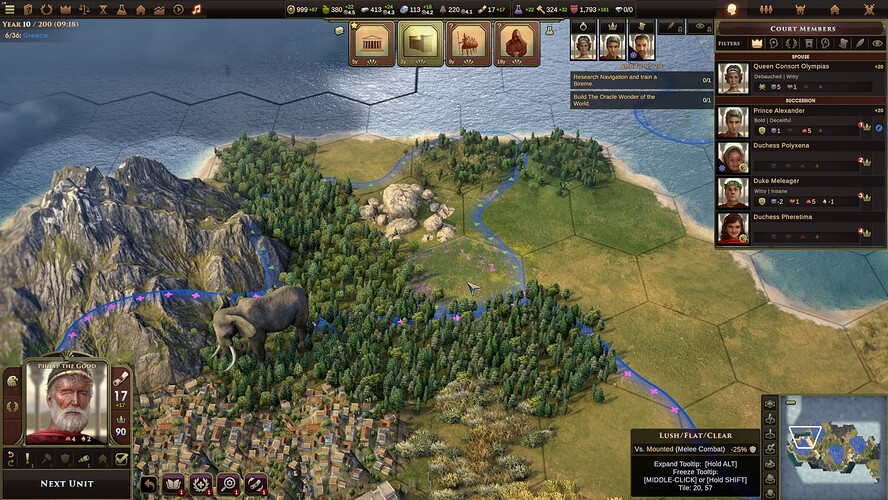 The extra blue border to my north with the little green arrows pushing out? Boom, there’s the boost (and one more tile over to the west out of sight). And that was on each city so I knew exactly how the boost would benefit me. I love stuff like that.

It was also a nice surprise seeing ‘learnt’ in the tutorial instead of ‘learned’ :)

The extra blue border to my north with the little green arrows pushing out? Boom, there’s the boost (and one more tile over to the west out of sight). And that was on each city so I knew exactly how the boost would benefit me. I love stuff like that.

So many nice touches like this! The one I recently noticed is the tiny builder icon on improvements in progress when a) you have a worker selected and b) your leader is a builder: 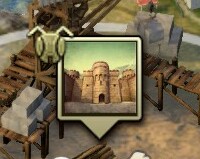 That bug head icon on the upper left means your leader is a builder, which gives your workers the unique ability to stack up and simultaneously construct buildings. The icon is just reminding you, “Hey, you have a Builder in charge, so don’t forget you can stack up your workers on this improvement currently being built!” That wasn’t there when the game came out, but at some point, Mohawk put in the perfect discrete reminder to help people play Builders better. It’s so very, well…chef’s kiss.

I found the micro really heavy towards mid/end game - any tips on controlling it? Should I just let go of my OCD and automate workers?

I really wish the automate commands came earlier or were well, automatic, for that reason.

I found the micro really heavy towards mid/end game - any tips on controlling it? Should I just let go of my OCD and automate workers?

I’ve never used the automation, but if you use it, please report back how well it works for you. Once you get several cities with several workers, there is a ton to keep track of,

I wonder if maybe slowing the rate of research would slow the amount of available improvements and projects, making it feel less overwhelming?

heh, i usually feel research is too slow! i rarely make it to the end of the tree and unless I play babylon and really focus on science I dont get much use from the late stage techs I do unlick.

I suspect this is working as intended. Unless you’re using some weird settings, your games will usually end long before you’ve exhausted the tech tree, and you’ll have to choose carefully which advanced techs you want because you’ll only get a few.

Yes, I think so too and thats fine. But I would like to make it to 1 end stage tech.

I suspect this is working as intended. Unless you’re using some weird settings, your games will usually end long before you’ve exhausted the tech tree, and you’ll have to choose carefully which advanced techs you want because you’ll only get a few.

My first game ended on an ambition and points victory (both at the same time) on turn 158. I had gone off the end of the tech tree. But I was very passive about attacking the AI after a very frustrating early war against Rome where he kept dodging around and ambushing me and then even after I cleared out his units the city near me was effectively invulnerable (so I pillaged all the improvements and went home).

It reminds me a lot of endless space 2 in that the AI is able to maintain a lead early, but cannot stack the econ bonuses correctly and falls behind. On the other hand the AI seems very capable of using its military, so its different from ES2 in that respect.

Having played both games extensively, I’m going to have to stop you right there. There is almost no way to continue this sentence without me objecting. :)

I’ve been very critical of the AI during the game’s Epic release, and since then I’ve seen the Old World AI struggle and especially improve. But most importantly, I’ve enjoyed some wonderfully competitive games of Old World that Amplitude’s games will never be able to achieve, precisely because Amplitude is notoriously bad at AI. There are certainly issues with Old World’s AI, but it’s head-and-shoulders – and then some! – above Amplitude and other similar strategy games.

The Old World AI is actually quite good overall, except that it doesn’t have the ability to take advantage of the very deep and micro-management intensive economic development sub-game, especially in terms of urban developments. It takes a lot of pre-planning to create a powerful urban economy in Old World but if you do, the output basically rewrites what is possible in the game. To build a potent urban economy, you have to do a bunch of things the AI just doesn’t have the capacity for including, pre-building of resource structures to bring in the necessary resources while not sealing off the spaces you need to build the urban buildings into, leaving space for the urban buildings that need adjacent pre-reqs to have them, and then taking advantage of as many of the adjacency and other bonuses as you can, and building up your growth so you have a lot of citizens and building up your city-civic production so you can crank out specialists, and then building the urban buildings and pumping out the specialists. If you do all that, you end up with vast multiples of production - ridiculous civics to further the pump, ridiculous training to crank out units by the bushel, ridiculous research, like 5X to 10X the pittance of research you start with, and so forth.

The AI just can’t handle all that (and in fact it tends to make many players insane with OCD) and that’s where the Old World AI cannot keep up with a human.

I consider that an inevitable side effect of the amazingly deep economic development system, not really a flaw in the AI.

It’s just the nature of Old World having both a very deep military game AND an even deeper economic game.

I don’t consider the limitations of the Old World AI to be a “flaw” but rather an inherent limit of what AI can do these days compared to the depth and richness of the economic part of the game design.

With random maps, I don’t believe there is any way to make an AI that can do the kind of layered planning that is necessary to truly crank out an urban economy in Old World. There’s a truly staggering amount of tasty juicy min/max synergy in the Old World economy but it takes a human brain to build it. Maybe eventually AI will get there but I haven’t seen any AI in any game that would even come close to the kind of multi-tiered planning that would be required. So I don’t fault Mohawk for having a “flawed” AI - I think the AI does as good a job as current technology allows; the issue is the game design would require an AI that hasn’t been built yet, and when that AI is built, it will take all our jobs and render us obsolete. That’s how intense the economic part of the Old World design is. Once AI can play the Old World AI game as well as a human, we may as well throw in the towel and worship our robot overlords.

i’ve felt that micromanagement burden at times. I second the suggestion to automate scouting once available, and to go with suggested worker improvements until the game feels more legible and you have a more intuitive sense of what to build next. Also, if you’ve extra orders, feel free to just not use them and let surplus convert to gold. There’s no need to pay 10-30 gold to adjust the position of a military unit if you don’t immediately know what to do with it.

I didn’t pay close attention in my last campaign. Does an automated scout use up orders in roaming about on its own?

edit: answer appears to be yes, something to keep in mind should you consider turning this on.

I consider that an inevitable side effect of the amazingly deep economic development system, not really a flaw in the AI.

It’s just the nature of Old World having both a very deep military game AND an even deeper economic game.

I don’t consider the limitations of the Old World AI to be a “flaw” but rather an inherent limit of what AI can do these days compared to the depth and richness of the economic part of the game design.

In one of his many designer notes, not sure if it was written or podcast, Soren, talked about when it is ok for the AI to cheat and when it is not. The player facing system, like military, trade, and diplomacy the computer should play be the same rules as the human. The economic stuff is fine to be asymetrical aka cheat. When you take over an opponent city you sometimes look at say that’s not very advanced or well layed out, but it doesn’t really affect how you play the game.

When a formerly peaceful Gandhi nukes you now that impacts your game.

And I did! scored 1 bonus point for an end-line tech. But by turn 100 I knew I was going to win, and I let the game drag on more than I should have.

I think @alcaras should promote his Youtube channel much more actively than he does. Recently, he posted a series of excellent videos about capital founding, one video per nation. They are great for both beginners and intermediate players, and I believe that experts would find them useful too. 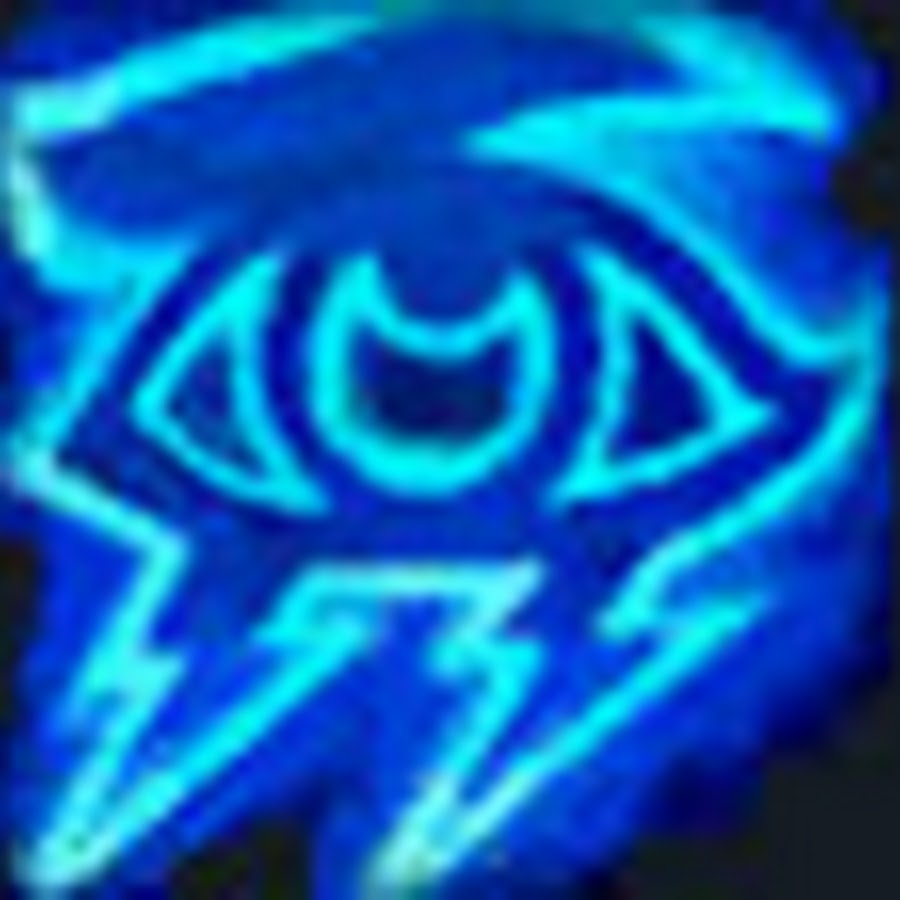 Thank you! New to making videos :)

Open to ideas of what folks would like covered in a video.