One thing that surprised me was seeing the undo button being used in a multiplayer game! But I was pleasantly surprised, because the undo button wasn’t just helpful for me learning the game, but it had become an integral part of how I played. I would routinely make test moves to see if I had enough orders, or check different results for events to verify the implications, or especially to work out various solutions to any given tactical situation. I played Old World like a boardgame, routinely moving the pieces around to check stuff before “locking in” my actual move.

So not having that in multiplayer was a difficult adjustment. I understood why, of course, but it still made it difficult to transition to multiplayer games, even when I was just playing friendly co-op.

But now you can use undo in multiplayer! That’s awesome! Are there any checks on this? I don’t care when I’m playing with friends, but I guess there’s no way to keep it from being abused if you’re playing with people you don’t know? Personally, I have no problem with the trade-off, but I wonder, @alcaras, if it’s been an issue among those of you who play a lot of multiplayer?

There are no checks on it – some events have changed to not give you traits until the following turn (so you can’t just undo to get the “right” outcome for an event). I think some RNG has also been fixed on turn start (e.g. so you can’t undo to find which horse wins in that racing event).

But it’s possible to abuse undo to scout to find goody huts early or to force march a scout all over your opponent’s lands and then undo. The community norm / expectation is “don’t do that” but there’s no way to enforce it and I don’t think there’s a way to do so without pretty significant game changes.

Another Cloud Duel. Tried something different this time – instead of narrating each turn, we do “situation reports” every 10 turns or so where we each review what’s going on.

We also had a lengthy post-game discussion after the game as well.

Continuing to be in love with all the interlocking systems this game has.

Added some tabs to my reference spreadsheet: 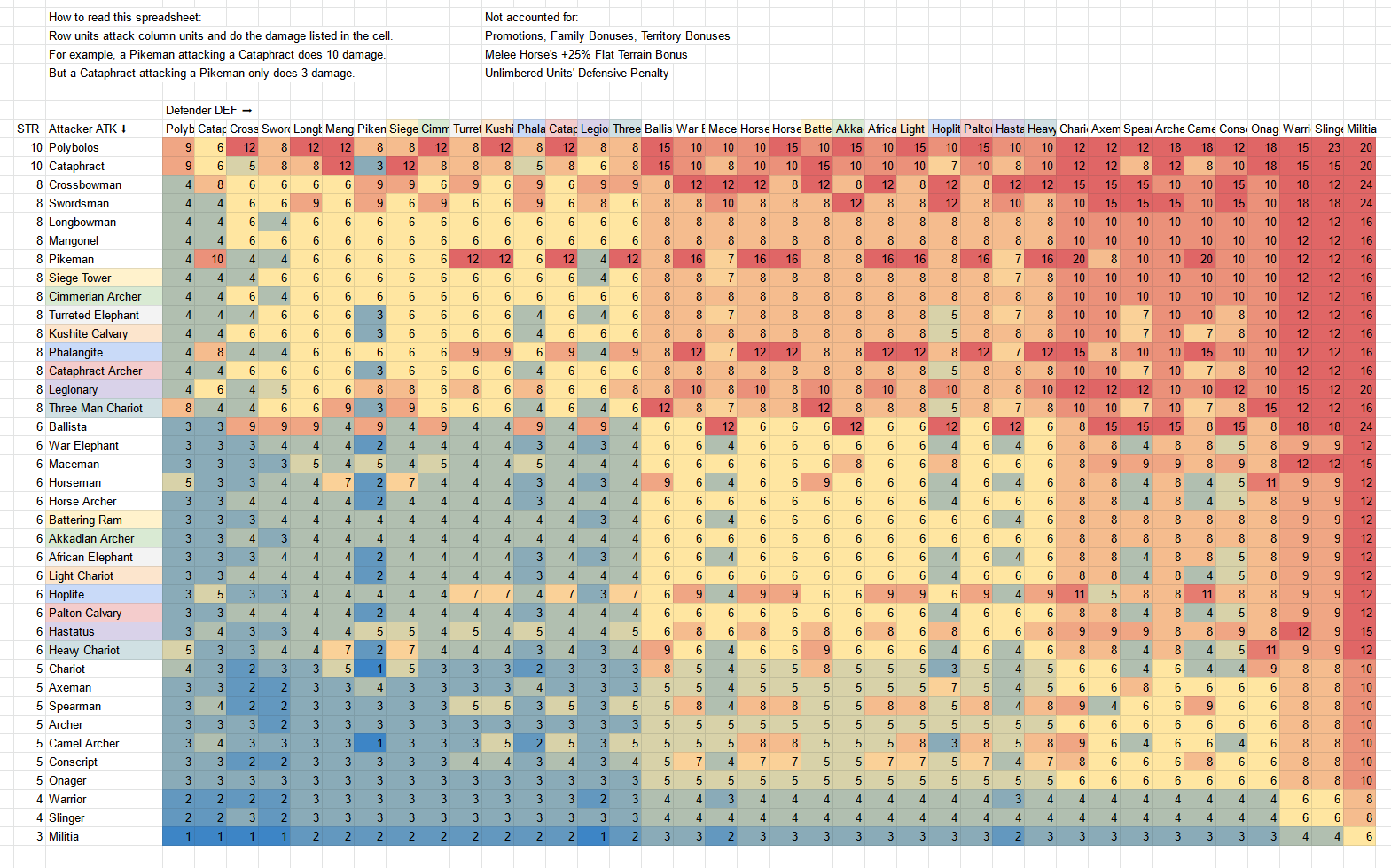 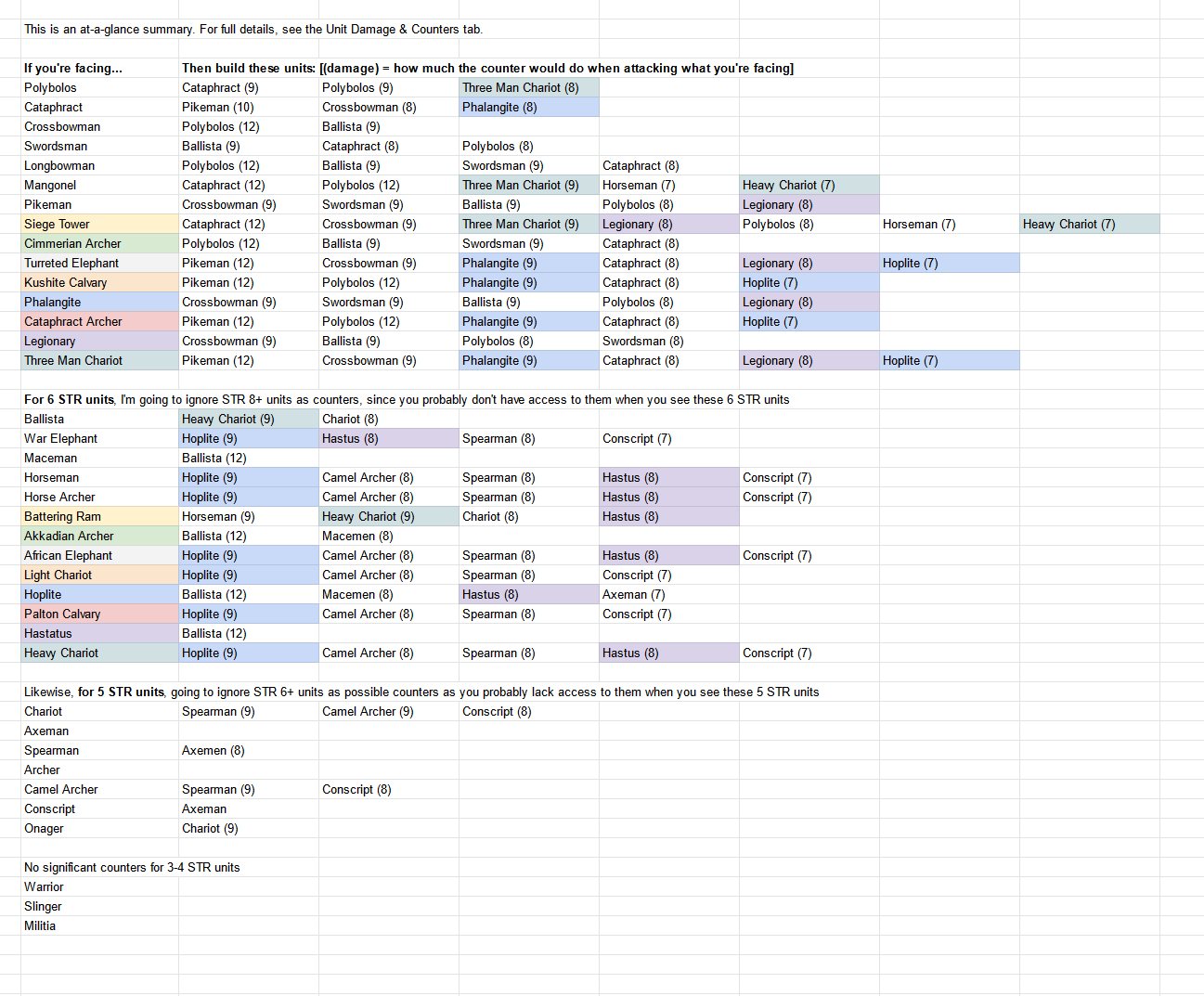 A quick reference version of the above – if you’re facing X, what should you (ideally) have to respond with?

I had to log in and say damn dude. Awesome stuff.

Another cloud duel with situation reports and a (much briefer) post-game discussion between Frederik and I:

Fired up a campaign in this one again and immediately had the same first impression of medium/large maps I did the first time I played it, there needs to be a way to zoom out more.

In AOW 3 or Hegemony III just to pick a couple random examples that come immediately to mind I can zoom out far enough to easily see the entire map.

Why would you not make this possible in OW?

The main branch has been updated!

I’ve been on a 100% Elden Ring diet since March and I’m finally cooling down and looking for something to tide me over until DLC. Enter Old World.

I checked just now after installing it on my new rig to see how many hours I’ve put in since first purchasing it in early open beta or whatever. Nearly 2,000 hours!!! And none in more than 6 months.

Yeah, I really love this game and I believe I’ll continue to love it for a long time. Right off the bat I can tell there’s been a LOT of new events and I’m looking forward to that.

I feel like this game has totally replaced the jones I used to feel for the Civ games. I actually like that it’s focused on the one era. Most of all, I really enjoy the style of play with the orders system, and the collection and production of resources always feels ‘right’.

For me, it’s the stuff you said, as well as the unique way it situates personal narratives in a geopolitical context. No game has done that as well as Old World.

I just binged on House of Dragons over the last week or so, and the whole time, I was thinking about how no game could support stories like this so well as Old World: personal, internecine, domestic, and international drama, all at once, all interrelated. Crusader Kings can churn up that stuff in its spreadsheets, but it comes so naturally and elegantly to Old World.

And, yeah, it makes it hard to go back to regular ol’ 4Xs, doesn’t it?

I got an email from Mohawk games just now! That’s exciting. It reminded me: Oh yes, I have owned this game since launch, when I abandoned it after a few days.

Just ducking in to ask: Does it have a better tutorial yet? I remember Tom Chick asking so many questions that I was also wondering about at the time, and thinking, Tom has the stamina to learn all this, but I sure don’t. If the game doesn’t have a good information on the interface and in the tutorial to teach me these things, there’s no way I’ll make a Herculean effort like Tom does to learn it all myself by asking questions on Qt3 and experimenting, etc.

Not my place to say whether they are good or not, but we now have two sets of tutorials, one is a traditional scripted tutorial (press here, then press here) and the other is a set of premade maps which play out just like regular games but with dynamic tutorial events based on when you need to know different pieces of information.

Are any more expansions or anything of the sort planned?

Definitely enjoyed what I got!

Hmm if an expansion adds civs, let’s guess what they would be…

If we stick with the geographic range of the initial game, then there’s a few obvious choices:

Sumerians - Let’s get some Gilgamesh going, and a civ with some cultural bonuses I would guess, maybe some river/irrigation bonuses as well. I suppose you could do a whole thing about having the Sumerians be heavily river based.

Minoans - Minos - bonuses for livestock - not sure what else was distinct about this Civ? My knowledge is weak.

If the game goes beyond the Ancient Med/Near East, then there’s tons of cool options - various Chinese Dynasties, multiple options in Africa, India and southeast Asia. I don’t recall if Korea and Japan go back far enough to fit the game’s time period. As a practical matter, I could see an Old World 2 set in the eastern/southern Old World with a somewhat different tech tree.

Take my money, Soren. Take it.

Sumerians - Let’s get some Gilgamesh going