Is this Apple Silicon native now? See claims that it is, but Steam system requirements don’t mention it.

Yes, as of the June 1 update: “Mac: Added native support for M1 chips on Steam”

Thank you, I didn’t think to look at the patch notes.

@SorenJohnson you guys should list Mac Silicon in your system requirements, it might lead to a dozen more sales.

Lots of big changes in this test patch:

This file has been truncated. show original

Made a quick video going over the changes: 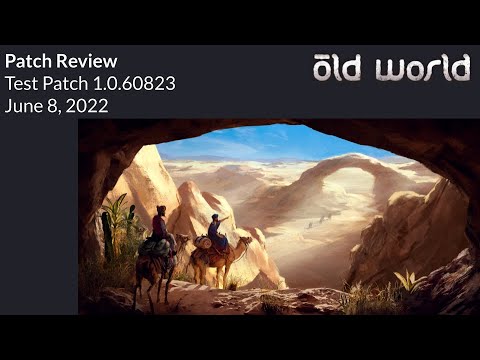 Others have mentioned the no characters mode, but indeed tuning event frequency is probably a better option if you want more/less character stuff.

As a relatively recent addition, we even have the Minimum event level which will limit events to the ones that are necessary for normal gameplay (like marriage proposals and heir education) while getting rid of the narrative ones.

Lots of big changes in this test patch

Yow, you weren’t kidding! This is one of those patches that’s doing enough minor but important changes that I’ve lost the will to play the current build! :)

I watched someone named “nolegskitten” stream the upcoming build on Mohawk’s Twitch channel yesterday. He was a relatively high-level player with a predilection for min/maxing that I could relate to (although not live up to!), and he showed off a lot of the changes while attempting to play at a punishingly uneven difficulty level. It was pretty thrilling to watch, and like your video, it really made me eager for these changes. It looks like a lot of them are to even out the game for some of the unique demands of multiplayer, but I also like how the folks at Mohawk are also taking pains to make everything intuitive.

For instance, neutral river movement and the ability for scouts to travel on water. They’re both important elements of gameplay that you can fold into Old World as you choose your laws. Scouts traveling on water was part of the Colonies law, and movement bonuses along neutral rivers was part of the Exploration law. Now they’re both under Exploration! I understood why they were separated before, but it just makes so much more sense that they put them together, and it pushes the game even further into that boardgame elegance zone. Now there’s a single discrete switch you can flip to make rivers and coasts a very different terrain feature, and it’s called Exploration with a capital E, and it’s one of the mutually exclusive decisions you get/have to make on the law screen. Now the water on the map comes even more alive. And now the decision to breathe that life into your game comes with a new cost: the mutually exclusive choice to take Exploration over Epics. Perfect!

Similarly, the changes to Slavery. I suspect 99% of us get a weird little tickle of guilt every time we adopt our fake videogame slavery, but it comes with the territory. Old World won’t hit you over the head with the enormity of slavery, but it will ding you with a discontent penalty to perhaps ease your guilt. But I’m glad to hear others think those bonus orders are just too good to pass over. Despite a couple attempts from Mohawk at nerfing Slavery and I think even boosting the alternative, Freedom, it’s always seemed to me that Slavery is just too good to pass up. Mohawk seems to agree and I love that the change to Slavery isn’t just to even out the choices you make, but how it also makes Slavery feel so much more thematic, and it also seems to fix its position as a way to meet the early game demand for stone. I like that specificity rather than the blanket utility of more orders. And the bonus to orders has now been shifted to Vassalage, which makes far more thematic sense as a social structure with widespread utility.

Also, the changes to food can’t come fast enough. I felt like every game played out with me selling tons of food. No matter how much I tried to back off food production, I am always desperate to get growth going, so I always end up with massive food stockpile, and therefore I always end up playing as a food broker, sitting on vast stores waiting for opportune moments to convert them to cash. Hopefully that won’t be such a consistent part of the economy for me.

I even like that they’re still putting in finer and finer gears for the amazing clockwork of their event system. The bisexual trait, for instance, might seem like no big deal, since gay is already a trait in Old World. But gay and bisexual are very different, both narratively and mechanically! So when I see changes like this, I’m imagining how the effects can trickle down through the event system to make more stories in my own games.

Anyway, great video, @alcaras! You and nolegskitten have done something I didn’t think anyone could do: make me stop playing Old World! Not that I’m complaining. These changes sound really exciting, and I’m happy to wait.

I watched someone named “nolegskitten” stream the upcoming build on Mohawk’s Twitch channel yesterday . He was a relatively high-level player with a predilection for min/maxing that I could relate to (although not live up to!), and he showed off a lot of the changes while attempting to play at a punishingly uneven difficulty level.

Yeah, nolegs is one of our team members now, and he’s certainly one of the most skilled and experienced MP players. He has remarkable, encyclopedic knowledge of the game’s rules!

Thank you for the kind words!

Load up the test build and give it a go yourself and send Mohawk feedback :)

One thing I didn’t cover in the video but that came out in data mining (really looking at the game’s XML files, since this game is somehow amazingly open source with everything moddable(!!!)) is that in the new patch AI will able to attack at Cautious or Pleased, whereas right now AI won’t war dec you unless they’re upset.

I’m curious to see how that plays and how the various probabilities work out, as it seems like significant shift in the game. (I like it – one of the reasons I prefer MP over SP is you can’t easily diplo humans the way you could AI and this makes AI harder to diplo).

…in the new patch AI will able to attack at Cautious or Pleased, whereas right now AI won’t war dec you unless they’re upset.

…in the new patch AI will able to attack at Cautious or Pleased, whereas right now AI won’t war dec you unless they’re upset.

There are a lot of changes that seem nice in the patch, but when I saw that one I have a hard time believing that will be a positive change. One of the biggest complaints about 4X games is when the diplomatic AI acts inconsistently with the relationship you have with each other. Old World was nice in this regard. If the AI starts attacking all willy-nilly…that isn’t good. I definitely understand the need to create more tension between the player and AI at times, because I’ve had some very peaceful games, but it seems like there would be other ways to accomplish it.

I’m not sure I follow this change at all.

I already had a very narrow circumstance under which I could form alliances, now in addition to that nations that are cautious or even pleased can just up and attack?

This sounds like Total War now with no diplomacy.

Maybe there should be an option to let AI nations attack nations they are pleased with, so people who don’t like that behavior can disable it. Attacking cautious I can understand if there is a good reason, and if it is rare compared to getting attacked with a worse relationship.

FWIW, you guys are discussing something that was gleaned from the files in a test build. And a test build that’s probably going to be in testing longer than usual because Mohawk is making some ambitious changes.

It sounds like the war thing is a change they’re floating for their testers and if they introduce it into the game, we’ll get a heads-up on how it works. But I doubt the AI is going to be declaring war willy-nilly or that diplomacy will suddenly become the black box we dread in other games. :)

Well that is a much too reasonable response :-) You’re right though - I should wait and see how it is in practice and not assume the worst.

I believe that it is only at Cautious that they will declare war now - please correct me if I’m wrong!

My understanding was from XiaoMao’s datamining / XML parsing (discord thread link), which shows Pleased appearing to have a chance for war.

I don’t know how that translates into actual chance to wardec though as I haven’t looked through the code.

There is a difference between a Declare War trigger (which won’t happen as please) and the regular “War Offer” percentage which is the regular number. In the former, war is happening no matter what (barring an event that allows a very specific way out.) The latter means a diplomatic event happens where war is one of the options but more likely the player will choose something else.

Or, to out more simply, the AI won’t just declare at Pleased but might at Cautious.

Awesome, thank you for the clarification.

So, to confirm my understanding:

In this patch is the AI can now unilaterally declare war at Cautious whereas before it would only do so at Upset.

The AI can threaten you with war at Pleased (or Cautious). but you’ll always have a way out (it might be costly). It would do this before too, but now it will be more likely.

Or, to out more simply, the AI won’t just declare at Pleased but might at Cautious.

Thanks, sorry for jumping to conclusions!