and thanks all for the many suggestions. i feel like I have figured out how to play Rome and Greece, so I’m going to keep on trying to improve my Babylonia game.

After a b-b-b-brutal game last week, Mohawk returns with something a little more reasonable. I never play One City, so this was a interesting change of pace game.

[spoiler]I won an ambition game with about 20 turns to spare. I used the Land Barons family and aggressively bought tiles to expand while simultaneously kowtowing to every foreign delegation to avoid conflict while knocking out non-military ambitions. 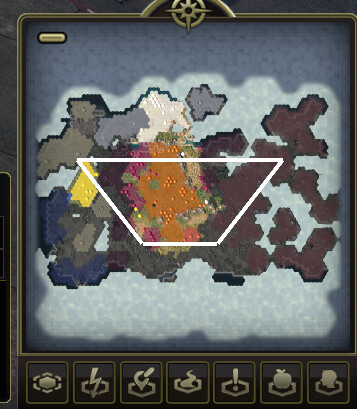 Hah, nice. I recently discovered the power of buying tiles with Colonization and I ain’t even mad about it.

I amuse myself by buying up all the tiles between me and another close Civ. I need to make a point next time I’m doing to check if it annoys them.

I recently discovered the power of buying tiles with Colonization and I ain’t even mad about it.

It’s one of my favorite things about playing Egypt (Rome has access to it too). Getting the ability to buy tiles right off the bat via the family seat of the Landowners is so so so nice.

game of the week

I bought this game as soon as I heard about it in early access, but I’ve only dug into it now. Fantastic game, I’ve have not had this much interest in a 4X game since Civ4. The AI even pulled off an amphibious invasion across the Adriatic and took a couple of my cites. Impressive!

I bought this game as soon as I heard about it in early access, but I’ve only dug into it now. Fantastic game, I’ve have not had this much interest in a 4X game since Civ4. The AI even pulled off an amphibious invasion across the Adriatic and took a couple of my cites. Impressive!

I think there are many reasons to like the game. But ultimately the reason OW is going to remain on my flash drive is because the AI is able to surprise me, and make a competitive game. Although, I haven’t actually see an amphibious invasion yet. So I’m looking forward to it. Mind you’ll I’ll certainly curse the AI when it does it!

Speaking of AI, I seem to recall reading somewhere that one of the reasons it performs so well comparatively was that the map maker was adjusted to give lots of open space and not too many bottle necks, so the 1UPT system gets a chance to work.

Is this true or am I misremembering stuff?

Also, if the source code is available, does this mean someone can put in stacks?

Removing 1upt would be such a massive, fundamental change to the game design I have a hard time imagining a mod pulling it off.

Not do I think it is at all necessary. The problem with 1upt in Civ V & VI is entirely around the AI.

I have a hard time imagining a mod pulling it off.

Hence me asking about the source code!

Not do I think it is at all necessary.

In this game, not. This and Gladius turned me around on 1UPT.

The problem with 1upt in Civ V & VI is entirely around the AI.

More specifically, my understanding is they designed systems but without taking the AI into account, whereas here in OW the systems appear to have been modified specifically for the AI, map generation being a specific example.

On the map gen front I don’t remember seeing that but I also don’t really read games press any more. I can tell you that my experience with the game is that choke points definitely exist (mountain ranges are very consequential, which I love) and the AI isn’t great at attacking into them … but it’s really hard to attack into a choke point in this ruleset and the AI at least can make a credible attempt (it doesn’t do the idiotic Civ shuffle) and seems to try to go around if such an option exists.

Two large reasons why Old World is better than Civ at handling 1UPT are the orders system and the scale of the game.

The inherent problem with 1UPT is the “carpet of doom” where there are so many units and everything becomes so clogged up that no progress can be made and turns take forever.
Civ’s attempt to fix this problem is by making units much much more expensive (after the very early game). And to prevent this being overwhelmed, production levels can’t ramp up as fast. This has its own (imo negative) effects on how other gameplay systems work compared to earlier entries in the series.

Old World has the orders system which severely limits the utility of any units beyond the number you can command with the orders you produce. (This is probably why units do no retaliatory damage when defending.)
The scale of the game is also very different when compared to Civ. There is vastly more distance between cities, allowing manoeuvring room for a reasonable number of units, and the units move much faster. That means the AI can generally choose the ideal hex for each of its units to bring all their weapons to bear.

Lastly, the shorter time period means early units are not so hopelessly outclassed by later units. This provides more strategic choice on how and when to strengthen your military and means that when a player loses a war it’s likely to be for strategic reasons (failure to build enough units / have them in the correct general area) rather than tactical ones (difficulty manoeuvring / being temporarily slightly behind in tech).

Well said, agreed on all points. Hadn’t thought of the distance-between-cities aspect, but as soon as I read that it’s obvious on its face.

To expand on the tightness of the timeframe, one of the biggest things that works in OW’s favor IMO is how scaling over time stays really flat. Yes, later units are better. Yes, bigger cities produce more. But on like a 3x scale at the outside, off the top of my head? You just don’t have these breakpoints where “whoops, they got Muskets first, guess I’m boned” because their army just flatly outclasses yours (or vice versa, which certainly can be amusing in a comp-stompy sort of way).

Though, tbh, I think production scaling is a much bigger culprit than unit effectiveness. All Civ games have suffered from this – hell, Stellar Empires suffered from this – but the absolute worst offender of all time has to be Master of Orion 2. A developed colony in the midgame could output what, 20x? 100x? Some absurd multiple, anyway, of an underdeveloped or new colony. Which meant that the optimal strategy was always, always, always to boom econ unless you had an exceptionally cheap war of conquest to fight (likely because of a tech advantage, likely because you out-boomed the laughably bad AI).

Anyway. All this is to say that Old World is great and I love it so.

Well said, agreed on all points. Hadn’t thought of the distance-between-cities aspect, but as soon as I read that it’s obvious on its face.

Soren & Team actually spent the time figuring out what would make 1UPT work instead of just slapping it in to an existing framework like Firaxis did with Civ 5 and 6. Going from stacks to 1UPT is a fundamental and dramatic change that is going to require that the scale of everything be reworked but they didn’t do any of it, they just hacked around the edges by making a combat unit cost almost as much to build as a Wonder. It was bad enough in Civ5 but after they just ported the system over which next to no changes for Civ6… well, that’s when I washed my hands of the franchise. I shouldn’t be thinking of these issues more than their game designers are.

Old World has absolutely shown that 1UPT can work in a Civ-like game. Props to them for not only designing holistically around it but spending the effort on the AI to make sure it can play the game as designed. That’s a major problem I have with 9 out of 10 strategy games out there.

Old World has the orders system which severely limits the utility of any units beyond the number you can command with the orders you produce.

I think it is equally due to the high level of individual unit movement points and significantly less ZOC-lock than other titles. That is, while orders do limit the number of units one can move, each unit can be moved multiple times and each move frequently results in multiple tile moves, on top of that forced march can push units even further.

The effect is an initially surprising degree of movement and fluidity for an (initially) small number of units. In the early and midgame, due to fewer units, map openness, the degree of movement freedom, and the sheer number of moves one gets to take in IGYG fashion, while their opponents units sit frozen, unable to reaction; it is almost impossible to create fronts and solid lines of engagement.

Units quickly rush across empires (especially along controlled coasts), and dance ‘through’ and around enemy positions.

Further thought: the attacker advantage works in concert with the above to make early and mid games warfare feel like COPA-style futbol in comparison to the more static UEFA-style football of previous titles.

I love how it thematically works, too.

Sure, you can move a legion across the empire in a year. If you have the logistics and C3 to do it. Makes so much more sense than “nope, these dudes can only move from Chicago to New York in this hundred-year span.”

Yeah. The orders system and how it ties into movement like that is just sublime. I love it, it’s such a neat design that is integrated so well into the game.

My personal opinion is that larger, more spaced out maps are a key reason OW works with 1UPT, and Civ5/6 don’t. The Civ maps are cramped, and with slow unit movement it means you’re constantly trying to funnel your armies into the available paths. For the AI this means the pathfinder becomes unreliable - any small change due to a hostile unit or anything else means many paths become impossible. Pathfinding is a very hard problem, and the Civ AI is mostly brought down by attempting to deal with the traffic jams. If you try Civ6 on a more spacious map without chokepoints, you can definitely see the AI perform better at war.

Old World just circumvents the issue by having larger maps and faster movement. A unit suddenly appearing in your path won’t entirely mess up your ability to get where you want, you can just go around the unit. Certainly within your own lands you can move freely, without having to carefully plan just because there’s a mountain in your territory.