Stone is never over. That’s an Old World lesson I’ve had to learn the hard way.

Yeah, I really have to get better at placing quarries even when there are no mountains about. You can never have enough stone.

I don’t know I waited so long to bring this up, but hats off to whoever came up with the soundtrack. This from a guy who normally turns the music in games off. This is the only game in 40 or so years in this hobby where I would buy it if it was available.

I tend not to notice the names of events, but I took a Dane city and got an event where one of the prisoners claimed to be the Vandal king’s son. I could have returned him to the Vandals for an opinion bonus, or I could have said he was just another prisoner and added a citizen to one of my cities. Instead, I chose to make him my ward.

Within a turn, I was noticing that my second and third children had been bypassed by me, and I kept meaning to track down what that was all about. But I was thinking that was ridiculous, they weren’t bypassed, they were never going to be king anyway. Then I noticed that this ward had become the first heir.

I had a wonderfully amusing situation that played out where Alexander kicked it early, and the adopted Dane became regent for Philip’s granddaughter. He was actually awesome, and ruled effectively for a decade, marrying a barbarian general who had joined Greece a while back and fathering a few kids of his own.

It was a tough choice to abdicate for the natural heir when she came of age - he was unquestionably the more skilled tyrant - but in the end I followed the laws. The regent emeritus lived his days out as the bitter but brilliant governor of Pella, and two legendary queens later the Greek civilization was acclaimed the greatest of all lands.

I have done the adoption route a couple times, and I think it depends on your inheritance type.

I had two daughters, so my newly adopted Thracian lad became the heir, but I think I’ve adopted before without that being the case. I could be misremembering though.

My latest game and I was having trouble getting heirs after one died and then every new king or queen (usually queen) just didn’t seem to be interested in having babies. SO I was desperate to recruit a husband once a young female heir took the throne and there were no heirs should she meet an untimely death…

One family gave me two options and as I looked over the pros and cons of stats, I saw one had a trait that made my decision easy “Gay: 50% less chance of having children” or something to that effect. Now if we’d had a robust family, I would have welcomed either, but I really needed babies.

Hah, I’d like to read the designer notes on setting that percentage.

I had one game in which I discovered my son was gay by reading up on the effects of the trait and stumbling upon a list of “Notable Gay Characters”. Imagine my surprise at seeing my heir’s name at the top of the list! We immediately sat down to have a talk so I could make sure he knew I supported him no matter whom he loved. Then I made him marry a Danish princess.

That’s YOUNG_HOSTAGE, it has an option to adopt the temp character from the event, but that’s a regular iAdoptedBySubject bonus. Sounds like the adopted character jumped to the front of the succession here, which is probably because the young hostage is 16. We don’t have a rule saying biological children come before adopted ones…

We immediately sat down to have a talk so I could make sure he knew I supported him no matter whom he loved. Then I made him marry a Danish princess.

I’m happy to report the game’s also aware of those circumstances, and your son may end up having second thoughts about accepting such a marriage!

But there are rules about legitimate and illegitimate births. Seems like a ward should fall under the category of illegitimate birth, right? I guess I’m also confused about what adopting a ward means. All I know about adopting wards I learned from Jon Snow in Game of Thrones.

All I know about adopting wards I learned from Jon Snow in Game of Thrones.

I learned all about it years before from Batman. And now look where that led. Thank you, Dr. Wertham!

Ok, I’ll double check if that event warns you that adoption will warn you of a succession change.

Ok, I’ll double check if that event warns you that adoption will warn you of a succession change.

In the meantime, he became a spectacularly successful king (if I ignore the fact that he and the queen had no children). The big surprise was that although both he and the queen were 100% foreign, I never saw any penalty for that. Which diminishes the need for a warning. I just assumed that there would be stiff resistance to a foreigner on the throne.

The big surprise was that although both he and the queen were 100% foreign, I never saw any penalty for that. Which diminishes the need for a warning. I just assumed that there would be stiff resistance to a foreigner on the throne.

I’m guessing it depends where you look. Sage families, for instance, have a negative opinion modifier if you marry someone from a Tribe. Xenophobic little buggers.

There might be a similarly negative modifier somewhere for rulers with foreign blood.

I have mostly enjoyed Old World, but after somewhere around 200-300 hours of play, I think I’m done - at least with SP. This is fine. I enjoyed my time with the game, and consider the best 4X game since CivIV.

I appreciate the RPG’ish direction OW took. For SP, should there ever be an OW II, I’d love to see them lean even harder into the character/role playing aspect. Really make a run at living up to the “Crusader Kings meets Civilization” epithet.

Ambition goals and limited turns score hunt is a clever way to help avoid the dread 4X late-game, but those mechanics might also be a bit of a mixed bag as they further introduce or expose some issues at the same time they are mitigating or obfuscating others.

While the AI is decent, and in certain limited aspects and slices can seem downright competent, overall it still isn’t good enough. Once you see the flaws, though, they are hard to un-see.

Early game AI is incredibly dependent on having an unfair head start, which can prove very challenging at times, albeit more often than not in a “that was bullshit” sort of way when the post game map is revealed.

In the mid-game, AI somehow seems unable to convert its early game 3-5 city advantage into a competitive “score.”

In the late game, mechanics (limited orders?), a lack of effective resource constraints, and the absolute sea of apparently aimlessly wandering units (especially siege) that the AI tends to build means that the game tends to limp toward a predetermined finish like a boxing or mma fight with open-score judging.

The only tension is wondering if you, the player, will pick up the win by 10th ambitions or by having a comfortable score lead at the end of regulation time.

It was a fun SP run - no regrets - I’ll be back when the DLC starts to roll in.

I think something may have gone a little screwy with terrain height generation in one of the recent weekly challenge games. 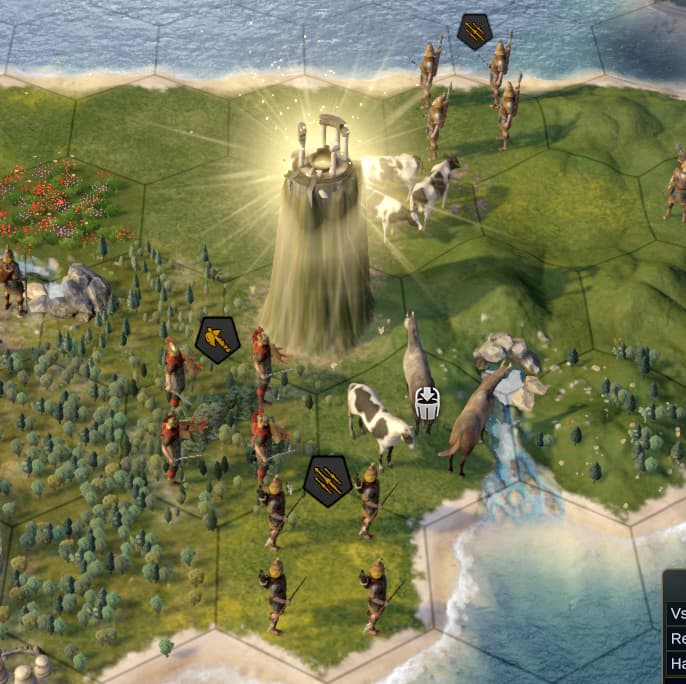