Old World: The Rise (and Fall?) of Qt3: a playthrough starring you, the folks on the forum!

Here’s a teaser for what I’m currently doing: 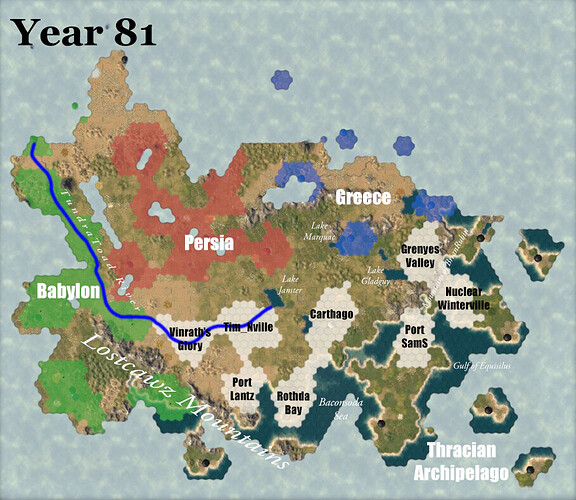 As you can tell, seriously subpar Photoshop skills, but I’ve got heart!

Your writer skills show in the topnotch selection of fonts.

Must be one hell of a party.

Dude, that party never ends, does it?

Where is @Kyosho when we need the poking.

Where is @Kyosho when we need the poking.

Oi! I am unfamiliar with this game and this thread. Get your own poker!

This is an incredibly educational (and entertaining) thread. Thank you! (And also tossing my name in to the character hat :D)

I guess we’ll never know how this story ends… will we, @tomchick ?

For a long time, historians struggled to explain Carthago’s collapse. A thriving civilization, maintaining a complex network of political and cultural ties with neighboring empires, disappeared from the historical records seemingly overnight. Documents from Babylon or Persia simply don’t mention Carthago after a certain date, Material evidence no longer appears in archeological digs. 18th century writers suggested the cause was simply “decadence”. Modern historians sought a material explanation, offering theories about changing climate, invaders from the sea, or depletion of the sea snail colonies that were apparently crucial to the economy.

Recently, however, an old manuscript discovered in an Italian monastery and purporting to be a copy of the writings of an ancient chronicler (whose name was anachronistically given as Thomas) have offered a new explanation. At first it seemed absurd, perhaps written as cautionary tale by a medieval monk. As the chronicle was studied further, historians had come to reluctantly accept its veracity, and its account of Carthago’s glorious last days.

We now know Carthago never collapsed at all. They were just partied out.

I guess we’ll never know how this story ends… will we, @tomchick ?

It ended with me losing faith in the game’s AI. :(

That said, I fired up a new game the other day and was delighted to see the AI adding theologies to world religions. I had literally never seen it do that before. It might be time to see how far the AI has come since the month after release.

It ended with me losing faith in the game’s AI. :(

That fall down the far slope of the chick parabola is as scary as it is inevitable.

I’d love to see his take on AI War 2 as I suspect he wouldn’t close out his session playing it with the comment “losing faith in the AI”.

I’d recommend checking the game out on Friday…

This is the poorest ragequit justification i ever expected to read here. I enjoyed @ArtVandelay 's outro much more.