You’re welcome. The stats included are what is used in the sunday show that DRC does going over league data. Tournid is making use of the tag column in the view, which ends up blank in the report. My spreadsheet as of this morning calculates OPS+, ERA-, FIP-, wRAA, and wRC+. OOTP write the files using a timestamp as the name. So I go through in the order that I exported, and quickly change the filename to the tournament I’d. Then my python script will populate that column with the tournament I’d when it pulls the data in to create the big csv file.

That link should keep working, and the file files should get updated as I continue the work with the tone tournaments appending in the end of the files.

The batters file contains some fielding stats in addition to the hitting stats.

Thanks! I’ll check the link periodically, then.

So would you put Ray Brown in your starting rotation? Love the 90 Stuff; don’t love the 65 MOV or 70 CON.

While I’m at it I guess I should link the card data as well:

Thanks for that. So the AH price for Ray Brown is about 20,000 PP. I’m not sure how much of that is the novelty of the Negro League cards – or that this guy can play outfield and pitch! I am hurting for utility outfielders, so I’m going to give it a try.

The NGL cards are going for high prices right now. I sold 1 silver, and 1 gold Friday morning for a total 67000.

I suppose I should consider selling mine while the prices are high, but as a sentimental matter, I kinda want the card. Plus the guy is a slight upgrade for my pitching staff.

Speaking of upgrades: I’m not sure whether to spend in the AH to buy one for my OL team. I’ve got about 14,000 PP – small change by the standards of you guys! My weak spot is probably SS (72 OVR Danny Thompson, who has IF range 90), or maybe my closer – I’m using Twitchell even on my OL team. But a significant upgrade to either is 3000 PP or so, for a decent gold card. I’d like to be promoted, and I’m about 2-3 games below the promotion threshold with 12 to play. Should I stand pat, keep winning tourneys, or buy something on the AH now?

Tough call. My calls are probably not optimal but for what it’s worth. I’d start Brown but I think the best thing to do is to sell him.

I wouldn’t worry about promotion. Falling just shy this week means you are likely to promote next week. You will probably earn more PP in the Rookie league. Any change now will be unlikely to really have a huge impact in 12 games so I’d ride it out and see.

Thanks, Madmarcus. I appreciate the advice.

Yuka’s Twitch stream is up, by the way.

Yeah, if you want to keep him and try him out you should. There will be plenty of other missions to catch people buying things up from the sounds of it.

Wow, just pulled this out of a tournament pack: 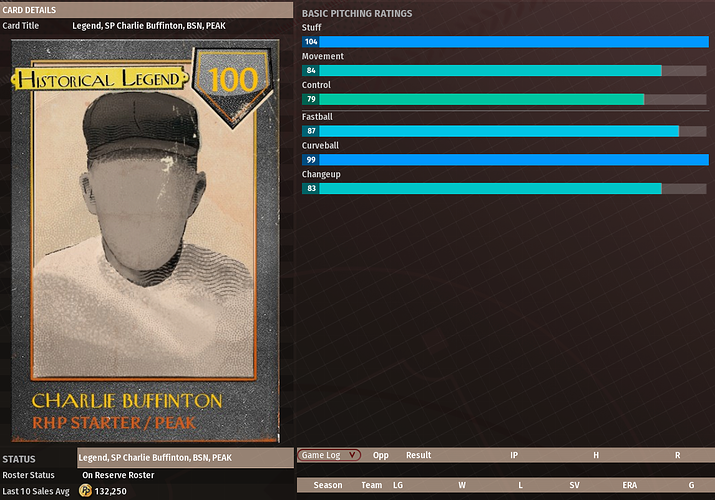 Wow, great card! Are you going to keep it?

My Red Sox OL had a classic Red Sox September swoon, and we fell out of first place in our division. Just like 1978. And just like 1978, we roared back to get a wildcard spot, winning 9 out of our last 10. Still missed promotion by a game, but I’ll get over it.

My non-OL teams both did promote, to Iron and Stone respectively, and one is also in a wildcard spot. Will that be enough to get me a little badge of honor on my OOTP banner, or do I actually have to win a playoff series?

That is the quandry. 130k is a lot of points, but that is a nice looking card. They already gave up Frankie Frisch for 200k, so I don’t know if I’ll force them to do it again. The Negro League cards have been rarer than the perfects for me. The count since Thursday is at least 3 to 2. 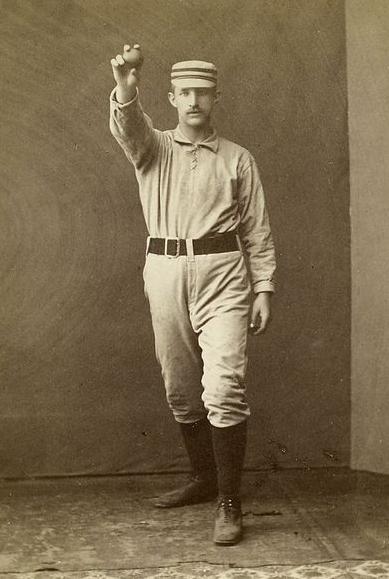 Thanks! Wow, that’s a great picture. I wonder why they can’t use photos like that on the card art. Surely it’s public domain. But I know that one must pay to use the likeness of certain deceased people, so maybe that’s it.

Good luck to you in the playoffs!

He would be perfect for your Red Sox themed teams.

Great pulls and glad to hear the stories of your guys success. Saturday was a terrible day for both of my teams in terms of tournaments play. I was getting knocked out in the first round over and over and over. What’s weird is that I did not change my teams from Friday to Saturday yet Friday they did well and Saturday it was terrible. I think I even looked at one tournament where my DH went to zero for 19. I’m going to write all that down as the luck of the draw.

One thing I noticed for Annandale, who has a silver tournament team, is that the Negro league cards are starting to appear on the winners. It’s not clear to me (yet) if those cards are becoming required for silver tournaments but if they are I’m scared because I don’t have the kind of money to throw down for three or four of them.

Both of my teams started playing a lot better in league play on Friday and Saturday. It was unclear to me whether my teams were improving that much or whether other teams were starting to try to throw games in order to not get promoted. Of course, to be fair, Annandale did complete a few elections and added a few of the SEs. My thoughts about promotion are I try to play my team a certain way, and if it is close to getting promoted I don’t change the teams behavior to try to throw games. What that ended up meeting was that Washington, who won 90 games but finished fourth in the wildcard chase (and third in my division!) Is getting promoted, while Annandale missed promotion by one slot. I’m fine with both those outcomes.

The funny part of the promotion story is that Washington was set up to try to not get promoted… I put my starters on a low pitch count and was hoping that my bullpen would be pitching exhausted all year long. Annandale I just set up normally. So both teams did the opposite of what I intended!

Had an OK day yesterday. Didn’t get to play in as many tourneys as I’d hoped due to irl stuff, but did get a win in a 16 team and got a 5 pack from that. I’d like my team to do a bit better more often, but I’m generally getting 3 or so rounds into the tourney but crapping out just before the payout rounds. Still, I think I have a pretty strong team with just some adjusting to do. What strategies do yall use? I kind of bounce around between moderate saber and tactician usually.

I ended up pulling away in my PT division. I’m thinking of selling my 100 Candy Cummings card. He’s down a bit from his AH high of nearly 200k, but there are a still a lot of 100 cards that are much cheaper to replace him with and have plenty left to stock up on other positions… He didn’t have the best ERA of my staff, but did go 12-1 so he just wins, Baby!. My ERA leader went a very mediocre 12-12, poor guy.

My card pull luck returned to crappy after pulling Candy earlier this week. I saved up and opened about 30 packs (5 or so gold) this weekend and only got a few gold (most dups) and one BoL. No Negro leagues, no Diamonds, nothing special that I could see. Yuck.

Great pulls and glad to hear the stories of your guys success. Saturday was a terrible day for both of my teams in terms of tournaments play. I was getting knocked out in the first round over and over and over. What’s weird is that I did not change my teams from Friday to Saturday yet Friday they did well and Saturday it was terrible. I think I even looked at one tournament where my DH went to zero for 19. I’m going to write all that down as the luck of the draw.

Yeah, I do a bit of tinkering between my 3 bronze tourney teams and I’m always wondering if I messed them up or something when they have a barren stretch. Usually at least one is running a different lineup than the others just to see how different players do. My Chandler team has had a really good run the last few days, zoomed past Cedar Rapids in its winnings and catching up with Texarkana. When you get 10 packs a win you can make up a lot of ground.

I’ve had amazing luck with my packs this year. I decided to let Buffinton play for Chandler for now. I can always sell him this week if I change my mind. I doubt his value will fall that much over the next few days.

I’m going to have to be vigilant to keep my rosters OL compliant. I wasn’t competing in OL this week, but my Cedar Rapids team somehow snuck a Future Legend onto the roster. I didn’t notice because I’d been just searching against the live card type until he won the batting title for their league last night.

Yeah, I’ve almost had a Future Legend sneak in too – easy to overlook, as we’re all filtering for non-Live cards, and Future Legends aren’t Live cards.

My OL team won its wildcard game and is now tied 1-1 with the league leader, a whale-ish team not in OL. I don’t expect to win this one, but anything can happen in five games. It turns out this means I will be promoted after all – Stanley Kuppchaser says wild-card winners get a promotion slot too. One of my two non-OL teams will also be promoted to Iron League. So I’m not doing so bad.

Can’t say I’ve had your pack luck. Or your success with tournaments. Now that I’ve got a decent tourney bronze team, I do win a few packs a day. I haven’t finished building bronze teams for my two “alts” yet.

So it sounds like you guys really emphasize amassing a war chest. How many PPs does one need to be competitive?

The first few seasons there are large promotion cuts because they need to fill up new tiers.

That makes sense. In general, I’m impressed with how well this runs. Amazing they sim all these games week after week. As you say, I wish they could give us a similar service for hosting private OOTP leagues.