Boy, I bet the bullpen is tired:

Heh, 16 innings. Is PT playing with the new extra-inning rules, with a runner starting on 2nd?

Also, the BFF folks advise us to join with only one team. So I’m gonna pick one, and maybe put a second in OL.

About OL: I’m slowly realizing that it’s not a big disadvantage to forego Live cards, as most of the best cards seem to be non-Live anyway. Also, it’s cool to have an Old Timers team. I now have a rotation that includes Carl Hubbell and Satchel Paige.

Right now my Charlie Buffinton seems to be outperforming my Cy Young.

Possibly my favorite team I’ve run across so far is a bronze tourney team called the Bronzons with a picture of Charles Bronson from the Dirty Dozen as the logo. If folks have seen the movie they’ll probably remember the scene that resulted in the person choosing the team name.

@Spock I see you got the discord invite, welcome to BFF.

Thanks, vyshka! Are you moving one or two teams to BFF? They encouraged me to move just one, asserting that it’s hard to be competitive as FTP. All my teams are FTP anyway, though.

Also, the Discord welcomed me with this meme. Illogical! 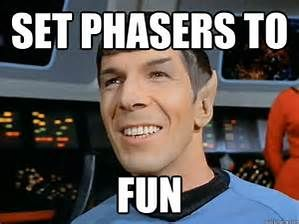 Just one. I haven’t decided which yet, but probably Texarkana.

I entered two 64-team Thursday tourneys: the Unsung Heroes (again) and Snapshots, in case anyone else is interested. Unlike the Unsung Heroes cards, Snapshots has ratings above bronze and much costlier. My roster is cheap and mediocre, and I’m sure some whales will dominate that tournament.

Good luck, @tylertoo ! I’ve started entering the occasional longer-term Perfect Draft, sometimes with 64 players too, as I don’t have the time or patience to do a PD every couple hours.

@vyshka, I’ve been watching DRC’s video on how to extract tourney data and put it into Excel. Is this how you do it? RBTL: Daniel Wallner - YouTube

I’m gonna start downloading data from tournaments in an effort to start looking at it myself. Gonna watch that video to start. I think I can use Google Sheets but if I start running into some obstacles I’ll just spring for an Office 365 sub.

Yep, I’m now looking at Office 365 prices now, lol. Not that bad, honestly. LibreOffice can make a Pivot Table, but it doesn’t have the same flexibility or functionality as Excel. Pretty tempted to pull the trigger.

These BFF folks are great, Charlatan.

Yes, that is how I got started. :) And yes, it got me to spring for the $7/month or whatever it was for office. We eventually need to do the family version for the kids anyways which is only a couple bucks more.

Yesterday was a fairly slow day for my teams in the tournaments or at least felt like it, but I’m currently sitting at 25, 20, and 44 packs respectively with 2 tournaments into the money at the moment as well. So it should be a good night of opening packs. I’ve held on to Brooks Robinson and he started to hit a little bit, getting up to .260 I think but I was ready to just quick sell him out of spite for a while yesterday because he was doing so poorly. Someone has been trying to sell one on the AH and I’ve been watching as the price goes down from the 196k to now the initial bid is 125k and still no bites.

Re: the data collection and analysis, I imagine there are people in the discord that will have much better advice on doing. There are folks there dumping everything into databases, plus others that do some modeling.

Heh, several people in BFF also say they just sprang for Office 365, lol. Can we use our Microsoft Points to help pay for it? I’ve got 13000 MS points from bing searches and quizzes.

So @vyshka your method seems more advanced than the Pivot Table DRC uses. He just adds tourney data, one after another, to the same table of his spreadsheet (which automatically expands to accept the new data), and lets the Pivot Table auto-update to reflect the new tourney data.

Yeah, I ended up going off into the weeds with some power pivot stuff. I’m a newb when it comes to excel and I was trying to figure out how to get it to show me player ratings next to the stats so I wouldn’t have to go dig for a card in the game. So instead of the simple pivot table like he shows, I’m using the data model stuff where I have the relationship set up between the batting & pitching tables with the card data table. A result of that is that I can’t do calculated fields like he did and have to instead use something called measures which has a language called DAX. I’m figured out how to display the ratings, but I’m still getting stuck on displaying things that pull from say both the pitching data and the batting data in the same pivot table (or something else if that is possible). So it is baby steps of slowly figuring out one thing at a time. I managed to do my own calculations of some things like woba, wRAA, wRC, wRC+, FIP, and FIP- so that was fun and seems to be working. If my reasoning was correct anyways. Tournaments are played in neutral parks so all the terms where they are adjusting for park factors should just fall away. The values seem to comparable to the stuff in ootp anyways. So it has been fun, but a chore :)

Edit: I will most likely scrap all of my pivot tables, or port the raw data over to another workbook and start over with the benefit of things learned at some point in the near future.

Thanks for that explanation. I agree that it’s fun! And even a learning experience.

We’ll probably all want to start over next week, once the new Live ratings arrive. As we’ve discussed, some cards will become silver, and even those that stay bronze may change their ratings, effectively turning them into new cards.

Incidentally, I have about 20 packs to open myself, but I’m holding them until after tonight’s OOTP stream. New Gold Build a Legends cards arriving, along with some new “limited edition” thing?

Yeah, definitely going to start holding packs on Wednesday thru Thursday PM for a chance at whatever gets announced.

Tourneys have been brutal today, Washington is 4-7 in 1st rounds, though I have won once, and Annandale decided to start doing serious work on their silver team and is 2-5 in the first round. I entered the Daily Late Silver to scope out the teams tonight thought my chances of winning are slim to none. One issue is an complete lack of silver cards on the AH. All you can find in non-live silvers is NL cards for the most part. I wonder if people are holding back for the Gold BAL missions tonight?

I haven’t run across Washington today, and I don’t recall seeing Annondale recently. Washington has seemed to get the better of me overall, though I took 1 finals :) Yesterday and today I’ve had a number of runs where they get to the quarterfinals and then lose, which seems to be the least efficient outcome :)

We’ll probably all want to start over next week, once the new Live ratings arrive. As we’ve discussed, some cards will become silver, and even those that stay bronze may change their ratings, effectively turning them into new cards.

If you have a tournament team that contains live players you might want to note your rosters. It’s not clear to me what happens if you load a bronze tournament team where one of the players has suddenly become silver. It might load the roster and say it is not valid, it might load everything except the silver players, or it may simply refuse to load the team entirely in which case you’d have to re-create it from scratch. So if you don’t have the roster and everything else written down you could be mad.

I opened a large number of packs last night, as I’ve been saving them up from two days for each of my teams. Plus, the new build a legend missions award you two packs for each of the missions you complete so I completed five or six of them and had a whole bunch more back to open. I don’t recall exactly what I got but it must not of been awesome. Aside from a smattering of live gold and maybe one live diamond, I know Washington got a perfect deGrom which I’m trying to sell, two or three Negro league cards, and three or four build a legend cards. Annandale got a Marty Marion who is a really super high fielding shortstop, and one BAL card. One of the teams got a low diamond historical pitcher so I guess that’s decent.

Good point. I think it will probably fail to load, because that is what happens when you try to load a roster for a different team.

I guess one workaround would be to load the roster for an unlimited tourney which should work, and then take out all of your non-bronze players if you’re editing a bronze team. So maybe my fears are a bit overblown!

Finally sold my Candy Cummings 100 card. Had to drop it to 100k, but I was able to fill in a couple of weak spots in my roster. My PT team is a couple of games out of the wildcard game, but I have @vyshka 's Reds OL team right in front of me. I don’t think I can catch him in the final days of this season, but it should be fun trying.

I got some great pulls (a 96 Maddux among them) on Wednesday, then saved up mission packs and tourney packs til this morning. With 3 gold and 17 regular packs I ended up with 4 gold cards and a lot of nothing. Oh well.

I have a NL card that is vastly underperforming, so I might sell it off. The NL cards are pretty pricey it seems.

I have pulled a few diamond cards, but today was one of my first historical diamonds – Emmett Heidrick. He’s not a huge upgrade, and in fact I have him platooning with Dave Fultz right now. 81 OF range, 69 CF ability, 84 contact, but a bad eye, and indeed he doesn’t walk much, which hurts his OBP. He’s hitting .300 but his OPS is only slightly over league average. We’ll see how he does.

Also, after a week of stability, the AI suddenly couldn’t find my tournament lineup. I think I fixed it, but a tad worrisome.