My BFF team in diamond managed to win in a mediocre division. So I made the playoffs. That will probably be the end of my season highlights! I haven’t upgraded Washington much recently. Although to be fair I did add a bunch of the team reward cards to it from collections I was able to complete off the bat. Not all of them have done that well so I might back out some of my changes.

Annandale won a ton of games in gold, after not making any changes from my silver team that won the championship. I did add two cards from the recently released Team missions – Smoky Joe Wood and John Kruk. Both have performed fairly well in about a third of a season. I am pretty sure they will be promoted to a diamond next week so that should be interesting. The build a legend perfects I have added have made a big difference.

@Spock BFF doesn’t track separate standings, I feel like that league exists more so kindred spirits can hang out on the discord and talk about the game and baseball. There is a lot of discussion about team make up for tournaments so if you want to learn how to construct a team for a specific format you definitely should hang out in the tournaments channel.

Surprisingly, to me at least, I’m into the finals in Silver. Adding Smoky Joe and Kruk helped but after kicking around in Bronze for a few seasons I didn’t expect to run through Silver in one.

My bronze tournament team stopped earning cards over the weekend. I put in Raines at DH only to see my team start dropping in the first round. The wonders of randomness.

Winningest record or not, Concord fell apart in its first postgame series, losing 3 games to 1 against a wildcard team that won 20 fewer games. Go figure. Next year!

Both of my teams lost in the semi finals for the league championship. I never expect to win them so it’s interesting to see how far they got but it doesn’t make me mad or anything.

Looks like the BFF and the OL are in the same diamond league this week. Should be interesting.

Hey @lostcawz , your River Cats and my Concord Red Sox are in the same Bronze division this week. It’s an unusually close division, with four teams separated by 1 or 2 games. I had the lead last week, but now you do. I hope it stays this interesting!

I thought that was your team. But haven’t had time to really do anything with my team this week so didn’t check. I didn’t even get on last night to see how I was doing. I know Monday when I did look it was a tight division like you said. Sounds like it still is. Should be fun.

My two teams are learning what it’s like to be in a diamond league with some very very good teams. That translates to “both my teams are doing poorly this week.” Hey, it’s to be expected. Gives me some good ideas for where I should be improving that’s for sure!

Finally took time to check on my River Cats this morning. My splurge on RF David Justice is paying off. However, my troubles in CF continue. I’ve gone thru 3 or 4 diamond level players with strong offensive stats and all have underperformed. Byron Buxton jumped up to a 98 during the last update so I put him back in even though he hasn’t been used for a few weeks due to him just being terrible for me. Aaaaand, he’s back to being terrible. At least he has some defense to offset his offensive numbers. But ugh. I really need some production from a player with ratings like his.

At least my newly updated 100 level Shane Bieber is pitching well after starting the season with about 5 innings total over two games and a 18+ ERA. Now he’s back under 4. Even my bullpen is doing pretty well.

Woke up to this haul for Annandale this morning. I need to quit OOTP because this is the epitome of winning! FYI I am saving the packs to open them after the show tonight so don’t know what I am getting/got from them.

Woke up to this haul for Annandale this morning.

Dayum! That’s some brilliant results. And about two weeks worth of mine. Of course I just noticed today I only had 23 players and no 1B on my tourney team due to ratings changes this week. Doh!

Very nice, Charlatan! I’ve certainly never woken up to wins like that.

I’m opening packs every day, thanks to victories and good showings in tournaments. But now that 2 of my 3 teams have finished the Live Series, I don’t seem to make progress on any missions. I finished a couple Team Missions when they first came out, but nothing since. Not quite sure how to improve my teams now. Each team has at least 100,000 PP to spend, but I’m not sure how much (if any) to spend on finishing missions, as they’ve become decidedly more expensive to complete.

Regarding upgrades, I figured Annandale would only be able to complete maybe 3 Build A Legend perfects so I spent some time analyzing what I had and what I needed. I looked at the top 10 or so rated Build A Legend players, then calculated the cost to complete each, based on how many of the cards I already had. I then looked at my team and figured out where the biggest weaknesses were, and I started going after those missions.

Actually that’s not 100% true…The first two BAL players I got were missions where I just needed one card, so they were comparatively easy to complete. THEN I did the highest priority one.

For the team missions, one of the big payoffs from those is completing the East/Central/West teams and getting the toppers, which are great payoffs. I decided I wanted to go for Bagwell first, then Robin Roberts, and McDowell last, if at all. And then I worked on those missions. Still don’t have those complete and I’m at the point where I don’t want to spend more PP on them now (the Yankees mission is so massively expensive that it makes more sense to me to work on a BAL card and let those Yankees come over time in packs).

While it’s true these missions are expensive, the rewards are pretty freakin good. But if you are patient with the auction house, you will eventually get the cards you need at around the L10 price.

If you haven’t done the Smoky Joe Wood mission, I would immediately complete that - he’s so good, it’s like cloning Cy Young. Other team rewards worth going after are Passeau, Tudor, Betancourt and Kruk, depending on your team needs.

I’d say second tier team rewards include Foulke, Montero, Kuenn, Perez, Furillo, Moyer. They may be useful depending on your team needs.

As a point of reference, here’s part of the sheet I use for ANN to track this stuff. For some odd reason it’s just a text file, not a spreadsheet. I list the mission, how much I need, and search strings for the players in question, so I can copy and paste into the AH for a search. 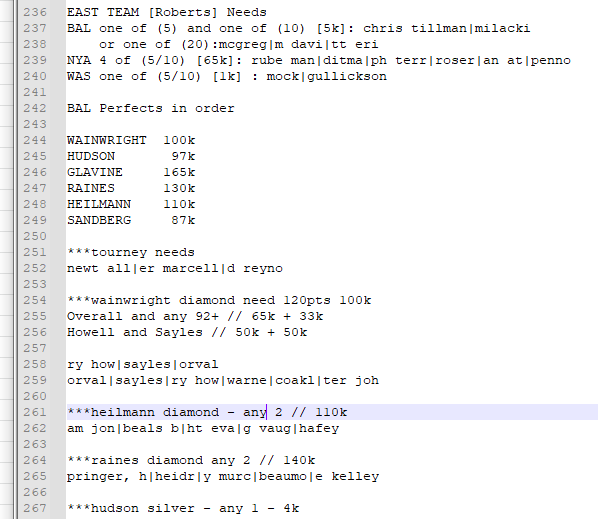 I did the Smoky Joe Wood mission. It cost me maybe 9000 PP to finish. Wow, his card is amazing! He’s scheduled to start next. Thanks for the tip!

I’ll look at some other team missions now.

Ugh, I was finishing off the Heilman perfect for my CR team, which had the diamond already and just bought Adam Jones twice, because apparently I’m blind. So now I need to sell one of them to get the money to finish it.

Finished up the east team missions with my Texarkana team, plus Smoky. I’ve been pretty much afk the past couple of weeks though.

Built up a 10 game lead in my division yesterday and now back to a tie. I did finish the Smokey joe mission. Spent maybe 16000 but he’s worth it it seems. So I’ve dropped him into my rotation. We’ll see if I can pull out of this nosedive I’ve been in.

I went into a worse tailspin than you, @lostcawz. You’re still in there pitching for the division title, whereas I am well back in the standings. Good luck!

My OL team just won a 23-inning game against the Castrotown Goblin Squad for our 7th win in a row. Smoky Joe Wood started, and then ALL 8 members of my bullpen came on in relief, lol.

I watched the replay and realized that PT does not use the new rule that puts a runner on 2nd in extra innings. It was 2-2 in the 10th, and only 3-3 by the top of the 23rd. My Sox scored four runs in the top of the 23rd, capped by an RBI single by Lenny Dykstra, driving in that known speedster Bob Boone from second. Dykstra has now hit safely in his 13th straight game. Weirdly, Castrotown scored three runs in the bottom of the 23rd, but I still won 7-6. Verlander got the win in relief.

I went into a worse tailspin than you, @lostcawz.

Ouch. Ya. I’ve been hanging around within a game or tied for first in the division but have fallen back enough that a wildcard spot seems unlikely. I’ve well, It’s not over yet. Unless it is and I haven’t noticed yet since I haven’t checked in a fe hours. Hehe

Both of my teams, after getting beaten up in diamond all year, improved a little to the point where neither will be relegated back to gold. I was sort of hoping one of them would.

Annandale has been saving up for the Perfect BAL Wainwright. I was a little short though so I figured I’d get it today or tomorrow. However, I checked the auction house right before going to bed and someone had put up the last piece of the puzzle for 5K below the L 10 price so I was able to snag it. So now I have a shiny new card, no money, and have to figure out a new goal!