Paradox Plaza (official forum) can be unpleasant for devs

Of course, but that’s what this whole thing is about. Paradox developers see value in having direct communication with fans, getting feedback, etc. It’s just that toxicity is demoralizing and makes devs want to pull back on that direct line. It’s there in the OP:

When I first started at Paradox, the direct line between community and developers was a major plus for me, because I liked the idea of talking to the community without having to run every post past three different marketing departments first. However, this kind of direct community access comes at a heavy cost for us. As many of you have noticed, we have gotten a little sparse in these forums in the last few months, or even years. The reason for this is that often we do face a debate culture that is not enjoyable to take part in, where it is taken as a given that the devs are either lazy or incompetent and where everything we do is viewed through that lens.

The first thing anyone needs to know about sales/client relations skills is that you have to have a thick skin and you can’t let rejection get to you. When you do that, you are finished. There is a reason why in business that you separate the production side from the marketing/sales side. They are different skill sets that are hard to find in the same person.

Agree with that. I really enjoyed his Rebel Galaxy games, with their southwest flavor and rundown aesthetic. I hope he comes back to it someday.

I started watching some of his stuff last night. Fantastic stuff.

I am amazed at how well people like he and Quill18 can deeply understand all of these games to casually just do an achievement run.

Agreed. I’m really disappointed I didn’t find him sooner - my youtube searching skills are apparently quite lacking (or I just wasn’t focused on his area at the time) because it isn’t like he is new or anything. His presentation style is among the best I’ve encountered.

I miss the days when games were made and we just played them, not watched them be played and designed by committee over years and maybe never actually being complete.

I feel this way too. Everything seems to be in eternal development. I know there are upsides, but it ain’t how I was raised, consarn it.

Would things have come to a head if Paradox hadn’t released a broken DLC?

Which one? Stellaris or the last four HoI4 ones?

Lol if that wasn’t an intentional joke, since this came up because of the EU4 broken DLC 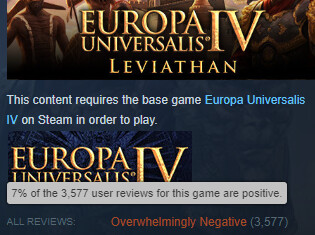 Even worse than it looks:

Leviathan, the latest expansion for classic strategy game Europa Universalis IV, has had a rocky launch. So rocky that, uh, it has become the worst-rated product available on Steam.

Why did Paradox remove the apology that was posted? I didn’t see anything necessarily bad in it apart from the fact that they had to apologize for a broken-ass DLC in the first place.

I think people were piling on to the apology in the Paradox forums.

I’ve seen a version of the apology letter that was turned into a generic boilerplate template that Paradox could use after every new DLC release by just inserting whatever the relevant version numbers are for the new release and just recycling the letter over and over.

I’d love to see a developer AAR of how the DLC was published with it being so obviously broken.

…or maybe they were just too cheap to do any QA whatsoever? Did I read somewhere they got rid of their QA people?

This is the most probable.

We can’t even use the “boost quarterly sales” since Q1 ended in March.

I remember listening to the Firaxis QA guy talking about how once a game is out in the wild, the sheer scope of hours users can play the game quickly exceeds the hours they can spend the testing the game. Which is how some late-game balance issues and the like don’t show up in testing.

Which, even if you apply the same scaling to Paradox, how the hell does “missing graphics” get through any sort of QA? I mean, I can see somethings related to the DLC messing up the core game – especially a smaller country that a lot of people might not play. Sort of a “if you play this new country, and they are aligned with this country, and that country becomes a rival of…” weird slippery slope.

Also, and @tomchick can also see how these two comparisons tragically line up, but I always considered Paradox to be a like Fantasy Flight: game companies whose work I generally like and am likely to buy a game sight unseen. Both of them seem to be on parallel paths with pumping out “meh” content.

I remember listening to the Firaxis QA guy talking about how once a game is out in the wild, the sheer scope of hours users can play the game quickly exceeds the hours they can spend the testing the game.

I totally totally get that. But the list of critical problems and issues posted seem to be things you’d notice within an hour of any given game start. This is why it makes sense to have an opt-in beta for strategy games. Gamers are often more than happy to not only kick the tires, but tear the engine apart to make sure the product they’re getting isn’t going in the wrong direction. I mean, it’s practically distributed computing for free.

Hmm, isn’t this a repetition of history again? Didn’t HOI2 (or was it HOI3? or EU3?) have some terrible expansion packs made by external studios back in the day that changed how Paradox did QA? Leading into the successful CK2 launches (and then EU4)?