When is POE2. Wondering if I should wait with my next POE ‘binge’ until that one is out instead.

When is POE2. Wondering if I should wait with my next POE ‘binge’ until that one is out instead.

Supposed to be late 2020… I vaguely thought it was going to be patch 4.0 but that may be an assumption on my part. Given their league structure I am going to guess it’ll be two leagues from now (so there will be a league that starts in early June and then POE2 will be Sept/Oct).

The original announcement said “we’re unlikely to start a Beta until at least very late 2020”, and that was before the pandemic. Then they wrote this in the lockdown news post:

I don’t expect it this year. Mid to late 2021 seems likely. I think we may get a trickle of POE2 planned features as part of the league updates instead.

Hm, I think I agree with all your points! So don’t look for it till next year.

We have just deployed the 3.10.2 Patch, which includes a Beta version of our Vulkan renderer. This alternate renderer provides much more consistent performance than the DirectX 11 one, especially when under high CPU load. Over the last few years, we...

I hope the Vulkan support works out. Ubisoft’s big games are supporting it now (Siege, Breakpoint) with great results. It’s a bit ironic that better multithreading raises CPU utilization and starves the DX11 graphics driver threads, but I think PoE is not the only game running into this.

Delirium performed so badly that I quit the league halfway through, which was very disappointing. I didn’t get around to starting a second build or using any cluster jewels.

My build was relatively devastating (Hierophant Archmage Storm Brand). I had planned it (with Indigon instead of Archmage) before Delirum was announced and the new gems were revealed! One mistake I made: Mind Over Matter doesn’t work at all for energy shield, and I went full ES with Ivory Tower + max ES leech. Pledge of Hands is strong but feels awful (double echo cast time). Archmage support is ridiculous. Storm Brand just does too many things: it’s a pseudo- spell/trap/summon/AOE/duration/DOT/cast-speed monster. I wanted to farm and buy a Skyforth.

I keep wondering if we’ll get a fishing league.

Thumbs up for Vulkan! Lets get rid of our directX dependency and get linuxs’ year on the desktop 2025!
Gonna test it out now.

Path of Exile is a free online-only action RPG under development by Grinding Gear Games in New Zealand.

Apparently you plant monster seeds, and then “harvest” the results. With extreme prejudice, presumably.

Seems a bit out there and I get that it’s supposed to make crafting custom stuff easier but nevertheless… not sure I’m sold on it.

I saw in a video that Delirium was the most popular league to date and so I was not surprised it’s going core. Didn’t really click with me but core stuff is rare enough that it doesn’t bother me too much.

We put the patch notes for Path of Exile: Harvest through a markov chain generator and these are some of the results. https://t.co/VQWPeW4bjL 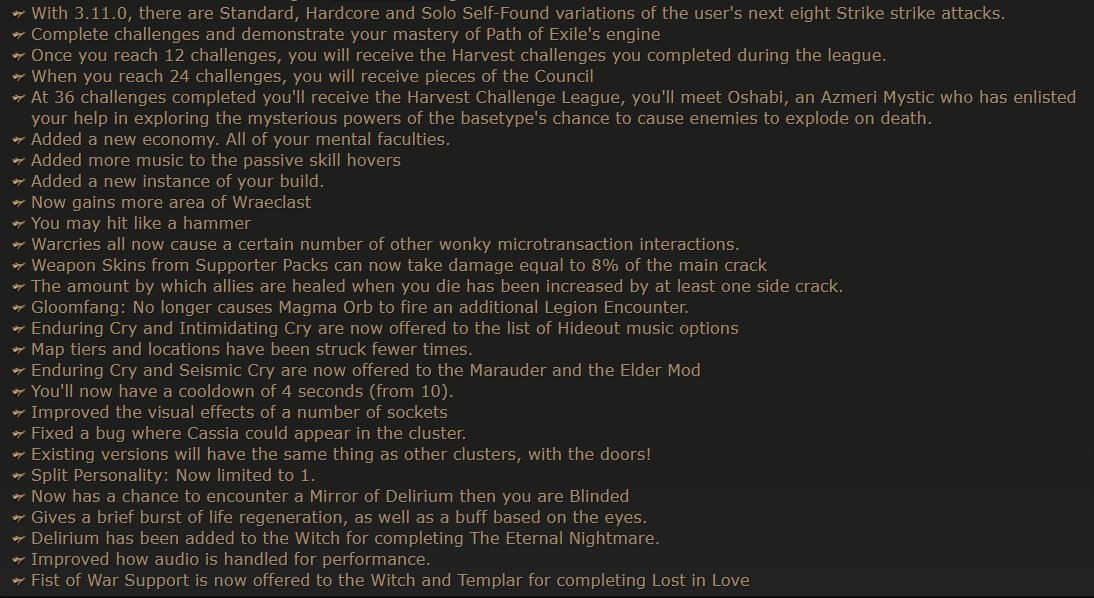 “Improved how audio is handled for performance.”

Now that the patch notes are out I was wondering what type of minion build @ineffablebob was going to run this league? :D

I’m trying to decide between a minion build and a Volatile Dead Spellslinger Necromancer.

I’m not going to be jumping in right away on Friday, going to be pretty busy this weekend. I’ll let the crazy rushers get it all out of their system and then jump in next week sometime. Maybe by then someone will have posted a warcry minion build that I like!

It's been one year since our Korean community joined us. To celebrate this anniversary, we've created the exclusive Dragon God Hat which all players can get when they slay Kitava in Act 10! You'll only be able to get it during the Harvest league. youtu.be/-Z4F8b_8ZFc

Kinda cool they’re just giving it away for getting through the story.

I’ve been keeping an eye on youtube prior to the league launch and have seen someone talking about a cremation build which seems… interesting. Unfortunately it’s one of those streamers who blitzes through a build and I like my builds written and made for dummies.

Another interesting thing I’ve noticed about the PoE youtube gang is that all the streamers seem to be trying to hone their racing skills. There is a streamer named tytykiller who is a master racer, and I’ve seen a couple of other streamers (ZiggyD, Zizaran) paying him to coach them in being more efficient/faster in leveling. I guess if you’re leveling stuff for a living it makes sense to be as efficient as possible (whereas I tend to dawdle along and don’t feel forced to go as fast as possible so long as I sort of have an idea as to what I’m doing). It does strike me as amusing when a youtube dude says “it should only take you 8 hours to get to level 80.” And I’m like… sure, dude. A lot of times in new leagues I spend an hour or two trying to figure out the new mechanic (which a lot of these guys don’t even touch until they hit endgame).

At any rate now my 3 potential starters are:

Max Block Warcry Cremation Berserker… though this build is just something I saw in a video this morning, so it might be a half-formed idea. But the streamer (tarkecat) says he’s going to use it as his league starter and will keep updating it so odds are I will be able to follow what he’s doing.

He’s already used it before FWIW so it’s tried and tested.

And now I’ve just become enamored with a Dominating Blow Guardian. I’ve never used that before, and it’s a minion build so maybe It will satisfy my love of minion builds. Plus it seems pretty tanky so it’s a bit of a twist on the traditional Necromancer summoner.

I did one of those a while back. The one I did was a low-life, gazillion auras build. It was fun but I haven’t run it for a few leagues, so I’m sure there’s been improvements!

I did one of those a while back. The one I did was a low-life, gazillion auras build. It was fun but I haven’t run it for a few leagues, so I’m sure there’s been improvements!

I think it was Blight? But maybe not. Admittedly the memories of various flavors of murder hobo bands can blend together.

Enki has reworked his Arc build to use Necro + Spiritual Aid and build large hp/mana pools/good tankiness and have good but not great DPs. I’m going to lead with it, I think. Arc is one of my five favorite skills and I haven’t touched it in quite awhile.

I was looking at the Arc build again and the 3.11 version is there, but the Path of Building link doesn’t work because PoB seems not to have been updated with the new passives. At least, it tells me it’s using the latest version (1.469 or something).