Looks like there will be a new CRPG right directly in my wheelhouse in the future. Chris Avellone (Fallout: New Vegas; Pillars of Eternity) is writing the isometric RPG set in the world of Pathfinder. 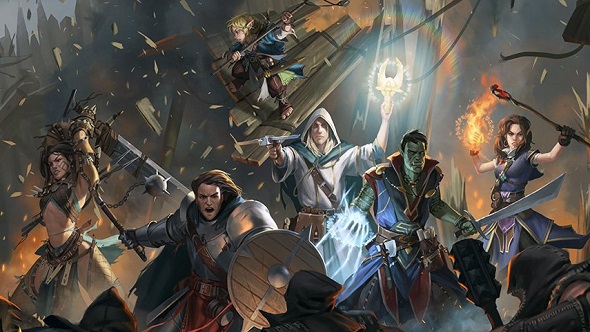 Pathfinder gets its first ever CRPG, written by Chris Avellone

Chris Avellone, the writer on some little-known games like Fallout: New Vegas, Knights of the Old Republic 2, Planescape: Torment, Pillars of Eternity and many others, is helping to create the first-ever isometric CRPG set in the Pathfinder universe....

There are paths that you have to find.

My limited understanding is that it solves some/many of the complaints from D&D 4(?), and is quite number-heavy for those that like min/maxing the world.

It was a continuation of 3rd edition wasn’t it?

I figured I got the edition wrong… I can never remember.

My limited understanding is that it solves some/many of the complaints from D&D 4(?), and is quite number-heavy for those that like min/maxing the world.

@vyshka is correct about it being a “continuation” of 3e but you’re not wrong to reference 4e. Paizo was publishing 3(.5)e materials and when Wizards released 4e they decided to make a d20 RPG of their own rather than switching to 4e, which was getting mixed reviews.

In it’s initial incarnation, IMO it did contain a number of tweaks and changes that made it a better d20 game than 3.5e. It has gotten rather bloated in terms of all the source books and splatbooks that exist now (just as 3.5e did), and one of the initial draws was getting away from all of that. Although one can easily stick to the Core rulebook and mix in other things to taste.

There was no one single change that made it better. Just a large collection of little stuff. E.g. there was no “class skill versus cross class skill” which lead to weird half ranks in skills in 3.5. Instead if a skill was a class skill you got +3 ranks as soon as you put a skill point into it. Classes tended to have more powers relative to the D&D versions, making them a little more interesting. Or the powers were more well rounded. E.g. Smite Evil in D&D was just something you declared on an attack. In Pathfinder, the equivalent power sees the Paladin designate an enemy and he or she enjoys the full smite benefits (+ a few defensive ones) against that foe for the entire combat (and at higher levels can do it a couple of times a day). Wizards and Sorcerors got a decent boost in power at lower levels because of the arcane paths and sorceror back grounds (things like being able to hurl a modest bolt of elemental energy [3 + caster score] modifier times a day, to give you something to do if you ran out of spells).

In related news, wasn’t Obsidian going to do a proper Pathfinder CRPG down the road?

In related news, wasn’t Obsidian going to do a proper Pathfinder CRPG down the road?

I don’t think anyone ever confirmed that, but it seemed like a logical path forward given their work on Pathfinder Adventures.

I’m with @Telefrog - now that he mentions it, I’m pretty sure it was actually announced as an upcoming, unannounced Pathfinder RPG project. Maybe it was transferred over to these guys so Obsidian could shift focus on other projects?

I wonder if this is going to be loosely (or strongly) based on the Kingmaker adventure path. One would assume, based on the name.

Anyway, I really liked that AP because it introduced a lot of the rules that would eventually be adapted into the Ultimate Campaign sourcebook. While a LOT of Pathfinder books over the years have been geared toward “MOAR POWERS MOAR SPELLS MOAR MONSTERS” sort of rules overload/power treadmilling endemic to d20-style games for whatever reason. . . Ultimate Campaign was amazing. It was basically rules for kingdom building and background crafting adventures and alliance-making and all sorts of cool systems like that. I love building up a power base in RPGs, and having some rulesets (all optional, and extremely varied) to support that action was neat. I mean, you can roll with it organically, but hey, sometimes you really wanna be able to fairly adjudicate how long it takes your players to take over the world of miniature equine aficionada while being opposed by high level crafter-mages from the town next door.

So, the idea of having the relatively sparse story amped up a bit with some Avelloning + kingdom building goodness and the Pathfinder ruleset which would be soooooooo much more tolerable if a computer was doing the math for you . . . honestly, I’m pretty hyped for this!!

I wonder if this is going to be loosely (or strongly) based on the Kingmaker adventure path. One would assume, based on the name.

It looks to be based on the Kingmaker adventure path since the web site mentions both adventuring in the “Stolen Lands” which is where that AP was set, and also mentions building your own kingdom will be a feature.

[Kingdom building] “will go beyond simple stronghold-building to become a true reflection of the hero’s character and choices made throughout the game,” Owlcat said. “Each kingdom will be a living thing shaped by alignment, choices, allies and the hero’s ability to lead his or her people.”

And from the pcgamesn.com article Scott linked in the original post:

Your kingdom will grow based on your “alignment, choices, allies and the hero’s ability to lead his or her people”, according to Owlcat. Expect a ruthless tyrant to create a city of cold stone, while a benevolent person of the people will build a thriving market town.

I can’t believe I’m writing this, but I think I’m going to pass. I haven’t really enjoyed any of the recent isometric RPGs from Avellone or Obsidian. Torment, Pillars, Wasteland - none of them really kept my interest past the first couple of encounters. like, I really struggled to get through Wasteland and Pillars. I never finished Torment.

As we get older our tastes and interests change. Nothing wrong with that, it is what it is.

As we get older our tastes and interests change. Nothing wrong with that, it is what it is.

Ultimate Campaign was a decent book. I don’t like the city building stuff quite as much as I like the way various retro-clones have revisited the original hex settlment/stronghold building rules (Dark Dungeons and Adventurer Conqueror King in particular), but I think it’s a pretty good set of mechanics and will make for a lot of fun in a CRPG. This is actually an area CRPGs haven’t really properly addressed. . . well ever. Not western ones. You get Japanese games that add in town building (thinking more along the lines of Azure Dreams where you invest to open stores and things in town as opposed to what Suikoden did where recruiting folks opened up town features).

ACKS is my white whale system. I got into a game of it that fell apart after three sessions. Nothing since then. Sigh…

Guys, Torment was not very good.

Really looking forward to a new D20 RPG with mechanics I can understand.

I wonder if this will fare better than the Pathfinder MMORPG? I can’t believe they thought that was a good idea.

Can I be smug and gloat that I have already played Kingmaker… the CORRECT way.

We finished our Kingmaker campaign about 3 months ago.