No, the way it works is that with it on, making an attack (and taking the penalty) gives you one round (six seconds) of the AC buff.

The characters you’re not using. If you don’t use them for a while then go pick them up, do they automatically get brought up to your experience point level? It seems like the game does this but not sure. If that’s the case is there a reason to not swap people out a lot to see how they work for you, or use different people for different scenarios?

Standard difficulty will have all your companions, even those you dont use, gain xp as you do. There is really no reason not to swap out as you feel like it - make the party that works for you!

Awesome. Now that I have 8 companions, I don’t have a clue who I should leave behind. I know I want Linzi but that’s it.

Just go with your gut - There is no need for any kind of insane min-maxing on normal difficulty. You will do just fine with what you choose :-)

Depending on your play style, I tend to make a party that covers off all the skills, with a variety of different attack styles for combat (different weapons, range vs melee, elements, healing, etc). It may not be the most interesting, but I really dislike missing out during skill checks because I don’t have anyone that can manage it.

I’m finally a Baron. What should my building priority be?

Also, why can’t my Bard Lindzi be an Advisor?

Also, why can’t my Bard Lindzi be an Advisor?

Different companions are eligible for different roles and you only have certain advisor roles unlocked at first - Linzi can be an advisor but not one of the first slots you unlock - keep building stuff and playing and eventually you will get more options.

Have a suggestion on what my first building should be?

Buletin Board if you don’t play with the lowest kingdom difficulty.

You have to be lawful to build that.

I pretty much settled on a build template for each city layout. The thing though with your capital is you’ll want to tear down and rebuild some stuff once you upgrade your city tier (more space and better building types become available)

Your longhouse/town hall should be centrally located with space on all sides and you should build buildings next to it that give adjacently bonuses. (Like an Inn) The best thing though is when you get mage towers or teleport circles. You can effectively warp between cities cutting down on travel time so place new cities strategically. 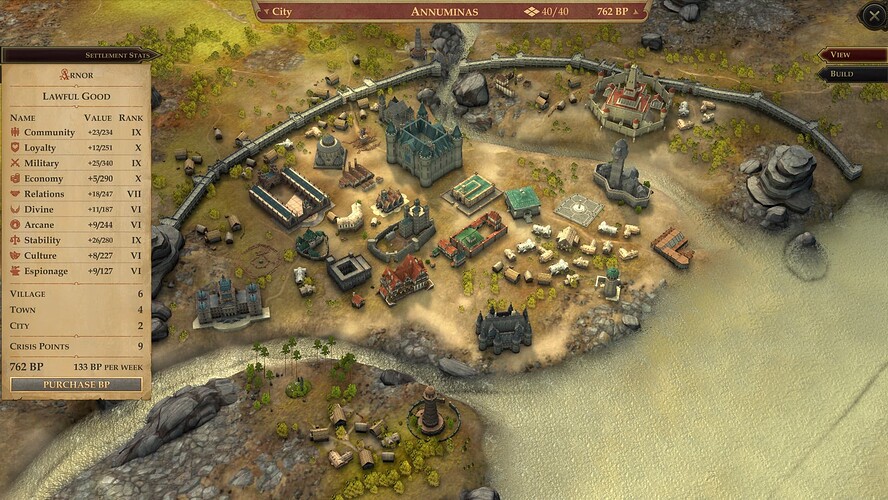 Having cities next to rivers can be beneficial since there are a few buildings that can only be built with access to water.

Kingdom building in Kingmaker is like WOPR in War Games.

Turn it off or set the difficulty as low as possible. Seriously. It appears to be meaningful with all its adjacency bonuses and kingdom stats, but all that’s mostly a waste of time and resources. Build as little as possible while meeting story requirements. Don’t stress about adjacency. Definitely don’t bother tearing crap down to build something more “efficient.”

Obviously if you don’t care about Kingdom management and turn it off, the city building doesn’t matter at all. Who knew?

I did care about kingdom management. I played a full game with it on. I thought it was the coolest idea in a Baldur’s Gate-style RPG I had heard of in a long time. Screw fetch quests, I get to be the king for once.

Turns out, sure, the buildings matter, but only certain ones. Any building that gives you just kingdom stats is worthless. The ROI for most of them isn’t even in the game’s full time period. As in, the resources you spend on them won’t be returned to you over the course of the entire game. So worse than worthless, really. The only reason to build them is to satisfy town upgrade or quest requirements.

So you have a lot of terrible buildings, and you have a whole adjacency system that seems interesting and important at first glance. It ends up being neither.

Playing on console, the timer for the beginning quest is really turning me off to this game. I had to go back to an earlier save twice now, losing many hours of play because I ran out of time. I hope the rest of the game doesn’t have this built in timer. Having to rest every minute or so during overland travel while the clock is ticking is very frustrating and tedious.

The ROI for most of them isn’t even in the game’s full time period. As in, the resources you spend on them won’t be returned to you over the course of the entire game. So

Pretty much every aspect of the game would be improved if all time limitations, especially the hidden ones, were removed. The timers ruin the game IMO. And, as you point out with the resource example, I’m fairly certain the fore-shortened time horizons imposed by the timers was something slapped on later, discordantly with the original intent of the design. But I’m biased. I hate the timers with a great and unrelenting hate.

The timers don’t bother me as much, but it could have been done in a more deft way. I think chapter 2 is the worst in regards to timed events. There is next to zero call to action until you’ve already missed out on certain developments.