In other news, man alive is the haste spell effect annoying when it’s up for an entire dungeon.

Omg it works so well. Everyone should download this immediately just to search for potions and spells. Can search by category a little easier too.

You wouldn’t need it if the fucking sorting worked. It worked great in Kingmaker. Wtf

I found out that I missed a trigger in Act 3 that didn’t fire and will bork my run.

What was the trigger? Asking because it sounds like I’m right around where you are.

I figured out my bug with Seelah! Posting the details just in case someone else runs into this.

I ran into another issue (shock!) where all the items from weapons to armor to jewelry suddenly disappeared off my main character (note: In Act4 if you rent a room at a tavern, make sure to check your equipment screen afterwards, I’m pretty sure what’s what did it to me). Because of that I was going through my jewelry trying to find the pieces that I had previously equipped when I came across this: 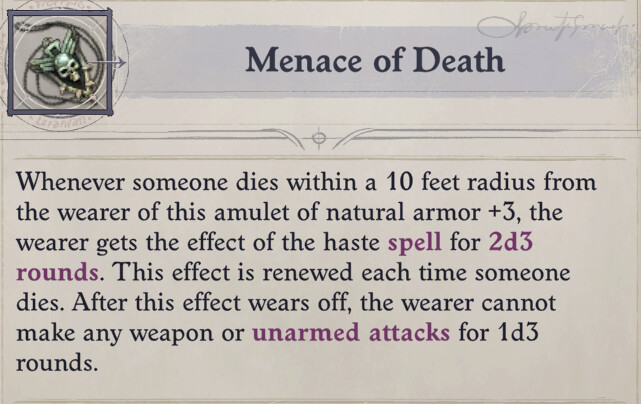 Note the last sentence. I verified that Seelah wasn’t wearing it (no one was, it was in my inventory) but I was suspicious anyway. So I moved it out of my inventory into my personal stash and I haven’t had the bug happen since. And it was happening every battle before. So for some reason I think the effect was somehow triggering on Seelah and it wasn’t putting any sort of debuff/notification on my buff list (lord knows I looked often enough!).

What was the trigger? Asking because it sounds like I’m right around where you are.

The quest is called Durability Test.

Do not end the Act without doing it. It involves Ciar.

For me the quest never triggered. No idea what the trigger is beyond doing his first quest, but it just never happened. I triggered it, did it and so far everything seems fine, but who the heck knows?

Are all the triggers for ending Acts obvious? Do they give the ‘if you do this, nothing else can be completed’ text?

I’m asking because there was a warning of a pending attack in my current Act, but I still have lots to do and am unsure if this is going to wipe out all the things I’ve left.

Speaking of attacks, is there any way to slow down the display of demon armies on the move? The map jumps somewhere then back to my party with a display note that says ‘demon army approaching’ but I can never see what they wanted to show me because it zips somewhere and back in a fraction of a second. Really annoying.

Have to say, despite all the minor (and some major) complaints and issues, I’m almost 70 hours into the game and still enjoying it. Kingmaker has made me worry a lot over timed events and I’m hoping that I don’t get caught off-guard somewhere along the way.

Btw, anyone use the new Crusade difficulty settings? I’ve dropped mine down right away (to Story) and it told me I would miss out on an achievement (which is okay). It doesn’t make the fights easier, just gives you more troops and resources, and prevents extremely low morale (my morale’s always been maxed out since I started the Crusade, though).

Who do you use for persuasion and diplomacy?

Are all the triggers for ending Acts obvious? Do they give the ‘if you do this, nothing else can be completed’ text?

I’ve definitely got that kind of text prompt. I can’t recall if it was 100% of the time, but I’ve found it to be pretty clear when I’m hitting a “no going back” point.

Btw, anyone use the new Crusade difficulty settings?

I just saw that when I was missing around! Was disappointed to see there wasn’t a difficulty setting for Crusade like there was for Kingdom stuff when the game first came out. That put me over the edge to starting a new game so I can play with it. I had turned it off completely with no regrets so far, but I was worried about missing out on some good stuff. Going with “story” because honestly I don’t find it very fun or engaging in terms of actual gameplay.

This is driving me crazy. How on earth do I get to Wintersun? 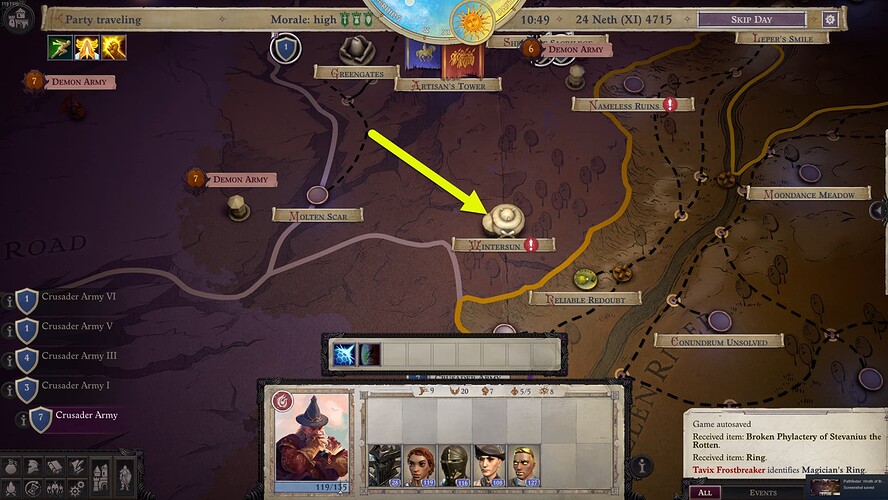 Pretty sure it’s through the 6-strength garrison to the north/northeast of it. I believe you approach it from the NE, but I’m going off of memory.

Yea, if there is someplace you can’t reach they almost always want you to clear a fort. Then magically other routes to that location appear.

That’s what worried me - my army doesn’t seem to want to go south from the node there. I’ll try again. Thanks!

EDIT: Well, I found another path leading in that direction that got me to those army stacks! Just one of those instances where a node that has no dark dotted line path in another direction actually does have other routes you can travel.

Stacking debuffs in the idiotic crusade battles is the dumbest shit.

When I started over to try a non-pally character I considered the crusader. But wasn’t sure how useful/enjoyable having a mount-focused class would be in a crpg. It seemed like a total anathema to the genre, and a focus that would never be used. But after skimming some of these posts that discuss mounts I may have to try a crusader. I don’t think I’ll start over again, but I may use one of those respec stones or whatever. Is a mounted class as your main a viable and enjoyable option? 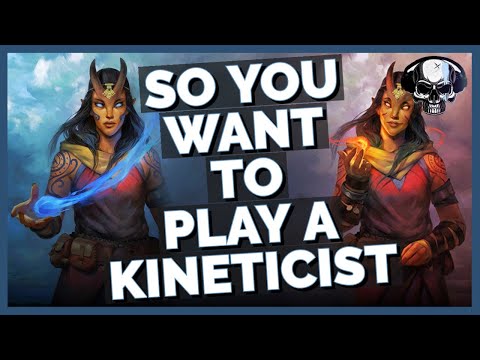 This really makes me want to play a Elemental Engine kineticist.

My Gendarme cavalier is 8th level, fighting his way through Drezen, and I’ve enjoyed it quite a bit. But you’d probably need to play turn-based over RTwP so you can control those charges better.

There’s still some buggy jank with mounts. But they’re quite powerful.

There’s still some buggy jank with mounts. But they’re quite powerful.

Damn you and all you other FOMO enablers! I’m never gonna get more than 3 hours into this game. haha

Hahahaha there is some serious fuckery in how they’ve tuned the encounters. How about some bullshit that’s immune to everything and does oh idk 100 damage a round to your tank because they attack at +23 or something fucking stupid? Hi-larious.

What’s weird is I see a lot of Youtubers running around with mounts and just using them as an additional party member, not mounting up on them at all. Which probably gives some nice flexibility to your character build, since you’re therefore not tied into choosing feats based on the assumption of being mounted as much as possible (as my Gendarme did, and ran out of mounted feats before getting the freebie at a later level).

Hahahaha there is some serious fuckery in how they’ve tuned the encounters. How about some bullshit that’s immune to everything and does oh idk 100 damage a round to your tank because they attack at +23 or something fucking stupid? Hi- larious .

Also, they have like 8+ attacks a round so you can’t even get lucky and dodge the tsunami of damage for a round or anything. :)

That’s the kind of bullshit that’s been driving me nuts in this game and prompted me to ask if you were having to redo fights or not on Core. Because even on slightly tweaked up Normal there are a lot of encounters where I can just be annihilated in the first round. I’m also not a fan of running into shit that has like 60 AC and DR/immunities up the wazoo. Even when you beat them, holy hell having to sit there and wait for lucky crits to do fuck-all to them is beyond tedious.