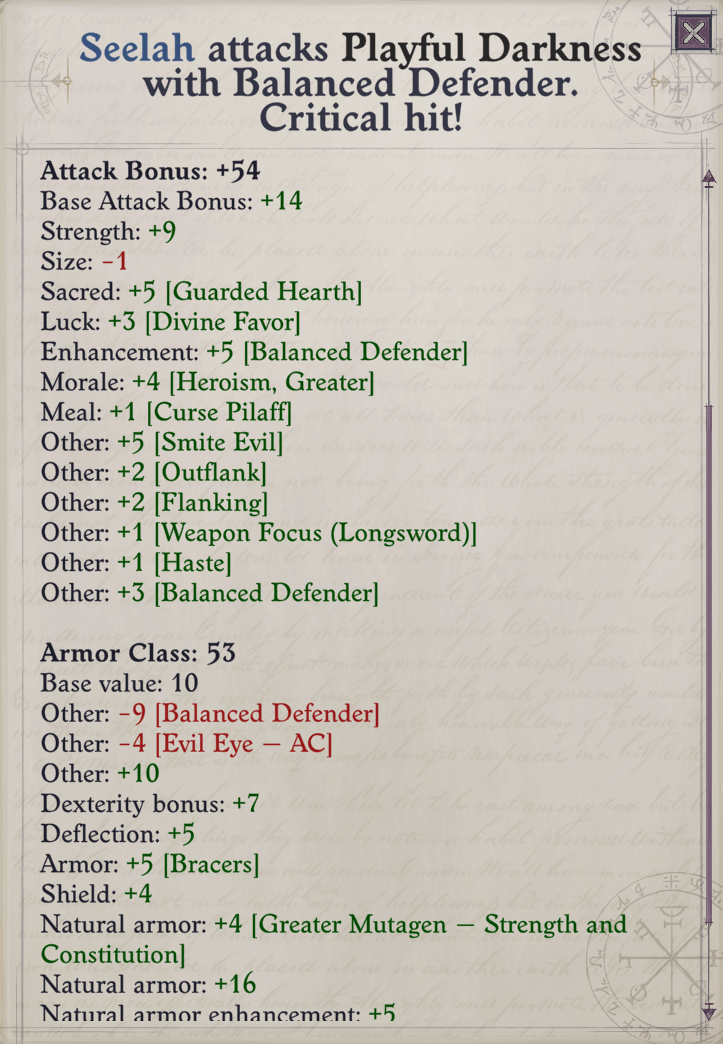 I applaud the work that went into this but that kind of thinking is also a huge drain on my interest. I absolutely go nuts over math and stats and such throughout my daily life; when it comes to games, though, I just want to have fun and forget about all the detailed management that would be needed to make this work.

I actually asked about Playful Darkness up-thread, wondering how I could possibly make it through. If the answer had been anything like this post, I would have just been a tad frustrated at a game design that would need it, even if it is optional. Likely would have moved on and ignored it as best I could.

I’m very much anti extreme difficulty. I get that some find the accomplishment to be a big part of playing their character build; not for everyone, for sure. I want to experience every aspect that the game offers otherwise, even if that means turning down the difficulty so the near-impossible battles become just mildly difficult.

The big take-away for me was to use Finnean. But PDs not too hard. Use summons and prioritize the Last Stand mythic ability for any melee.

Noticed a new, small, patch that fixed a few things (like pits in TB mode).

Crusaders! A new patch 1.0.9c has arrived. It’s a small patch this time, but something big is coming, stay tuned. Beware of possible plot spoilers below! Quests Areelu's insidious plan could not be fulfilled - fixed; 'Where's My Dragon?' quest could...

And, um, something big coming? DLC?

Anyone who’s finished the game have any good advice for Act 3? Act 1’s overall main objective was clear, as was Act 2’s, but here early in Act 3 I’m honestly not sure what to do. I’ve got a ton of quests that poured in, I’ve got demon armies all over the place, towns to build, and I’m leery as shit of moving my party or my single super-stack army too far from Drezen. Will demon armies sack the city if I move too far? I’m asking because I see them moving around, mainly coming toward Drezen from the west.

Feel free to move the party wherever you need to get the quest done. TP back when your corruption gets too high. Rest in Drezen, then go adventurin’ after selling your stuff and meeting with advisors. Repeat.

I’ve only ever seen one active enemy army at a time. It is stupidly hard to find out where they are due to Fun Bugs™, but once you spot them, you know what they are going to do. They make a beeline to Drezen or a fort and then siege it. Go out to meet them. It’s important you don’t stay holed up in Drezen, since you get all kinds of rewards for beating armies on the world map. You can get relics, income, and of course, open up new areas to explore. So go out there and start smackin’ demons silly.

So go out there and start smackin’ demons silly.

Cool. That was certainly my first impulse, just wasn’t sure if it was safe and Act 3 is a bit overwhelming with everything that gets thrown at you.

About the crusade armies, I’ll toss in that I tend to expand a radius out from Drezen, and the army strengths really dictate where you can go next until you have your stack-of-doom powerful enough to overcome any of them.

I love that they added an infirmary capacity bar. I only noticed it after last patch but it may have been there for a bit since I was in the Abyss. That lets me decide when to use the Cure Wounds spell so taking apart my armies piecemeal isn’t a thing.

Aside: Oh, um, wow. Hit Shrine of the Three and that was…interesting. I’ll have to do it again as I didn’t make it through the first time, although it was close. Now that I understand my objective it should be easier (the blank ‘Accept’ notice didn’t help at the beginning; wonder what it was supposed to say).

At least this one won’t be as bad as the Playful Darkness, I anticipate. Too bad I gave up my Mythic abilities of the Trickster as I had some pretty nice crowd control paralyzing happening for a while.

So I’m back to playing and just about to attack the Grey Garrison. I’m trying to finish up some quests and eventually looked online to see where Kaylessa is, but she’s not there. I made sure Forn back at the tavern is still asking me to find her. Is there a way to see if I already talked to her and missed it? . Thanks

Ok, I tried not to read too far into this storyline and just see where to find her, but did notice this might be the case. Still weird that it shows as an uncompleted quest, but I’ll just mop up the other lingering quest and head off. Thanks

I’m looking in the Market Square in the spot one of the guides points to and she isn’t there. Unless you mean the square where the initial demon attack happened. I’ll check there. thx

If you used a guide then I guess something weird happened. Either a bug (very possible) or another trigger fired to make her leave her spot. My guess is she’ll end up showing up in your camp. Keep an eye out for any mysterious newcomers.

I think I’m in Act 5 and have to manage the crusade again? What’s the best way to trivialize these encounters, cuz I’m not interested in managing these anymore. Love the storyline and exploring still but want to skip past the crusade.

Crusade has its own difficulty setting. Try lowering it.

I have advice for anyone playing an arcane caster lich. For your first lich power pick death of elements, which makes all your elemental damage negative energy. Then pick up the epic power ascendant element for negative energy.

I did NOT pick up that death of elements as my first power and as a result my main character as a wizard is fairly weak. I use bone breaker mostly it is kind of crappy. Meanwhile Nenio has an ascendant element of fire and is kicking ass with those controlled fireballs.

I am in act 4 and I need one more mythic rank before I can get that next lich power. So most of the game will be done by the time I can use Death of Elements.

I think I’m in Act 5 and have to manage the crusade again? What’s the best way to trivialize these encounters, cuz I’m not interested in managing these anymore.

Your options are to turn it off or turn the difficulty down in game settings or there’s a mod you can download that auto-wins all battles.

Yeah, about that Wintersun village boss fight inside the hall. . .wish I could auto-buff like that too. Good grief, the devs really like pulling random crap out of nowhere that will just wipe you in a single round.

Third playthrough completed! Got the Secret ending. Phew. Such a sphincter moment getting to the very end and not being sure if you did all the dozens of steps leading up to it correctly – even with the aid of a guide.

I went with the Demon mythic path and it does have some satisfying moments. Like slaying Noticula and becoming the ruler of Alushinyrra.

But at the same time when Act 5 starts apparently you’re now the leader of the demons… attacking the other demons? Drezen is filled with friendly demons whether you like it or not. That wasn’t really how I wanted it to go. I was generally a “good” demon and thoroughly enjoyed killing other demons and really wanted to kill all the demons walking around Drezen. But I couldn’t. Weird and kinda lame.

My Spawn Slayer with the crit-focused fauchard was OPAF and could pump out over 1000 damage a round. I killed a certainly demon lord too quickly before I could plink them with a Midnight Bolt so I had to do it again.

Not sure what to do next. I want to do a Paladin / Angel run, but I did 3/4s of Angel on my first playthrough. I also really want to try a Cavalier / Legend but mounted combat remains buggy…